Yahoo Alert: Meet the New Mark “Sure Would” 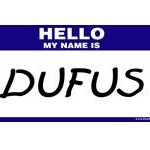 There’s a political water boy up in Dayton, Nevada named Bob Hastings who did the bidding of Jon Ralston and Orrin Johnson in filing a frivolous IRS complaint against me last week. And Bob is just SO proud of himself; why, he’s nearly bustin’ his buttons.

“Jon Ralston likes me! He really, really likes me!”

And the little fella just can’t wait “for Chuck Muth to attack and tell me how wrong I am and how I don’t understand.”

Well, sorry to disappoint, but why in the world would I tell him – or Johnson or Ralston – what mistakes they’ve made in pursuing this silly complaint which will end up making all three look foolish?

In the meantime, here’s a little more about Bob:

He was a big Danny Tarkanian supporter in the 2010 U.S. Senate race….and a blog troll. He’d regularly go on other folks’ blogs and post mindless comments about the campaign, belching up “facts” as he understood them…usually wrong. It got so bad at one point that I had to start blocking his comments here on Muth’s Truths.

Differing opinions are one thing; stupidity and ignorance is another thing altogether.

Well, ol’ Bob threw an e-hissy fit; shrieking “Censorship! Censorship!” So I had to explain to this clod that his right to free speech did not include the right to use MY soapbox to exercise his right – and suggested he start his own blog and try to get people to read it. Which he did.

Start his own blog, that is; not get people to read it.

In fact, I checked his blog this morning and he shows all of 40 subscribers – 39 of whom, I’m guessing, are relatives since no one in GOP politics I’ve been in touch with who know him have a very high opinion. (Not exactly the brightest bulb on the Christmas tree, if you know what I mean.)

With yahoo Ass. Mark Sherwood ducking a re-election bid, I was afraid there wouldn’t be a horse’s ass on the ballot next year that I’d be able to poke fun at for the entire campaign season. Fortunately, Bob has volunteered to take “Sure Would’s” place.

As such, I checked out his campaign website this morning. And the hilarious part is the page listing all of the people who “Support and Endorse” his candidacy:

I mean, come on. If you only have one person willing to publicly admit he’s supporting and endorsing your campaign, don’t you think that maybe, just maybe, if you have any brains at all, you ought not put that page up on your website until, you know, you have at least, say, two people?

I also found it funny that in trying to link to his opponent, incumbent Commission Chuck Roberts, Bob instead linked to the Wikipedia page of the former CNN news anchor of the same name. Real attention to detail there, huh? Surprised he also didn’t claim Chuck was married to Cokie Roberts!

This is gonna be fun.

Way to go, Bob. Without your silly IRS complaint I’d have never even known you were running for office, let alone how rib-splittingly lame your campaign is going to be. Now I have a new hobby. Thanks for the Christmas present!