LightSquared Could Bring Speed of Light Broadband to Rural Nevada 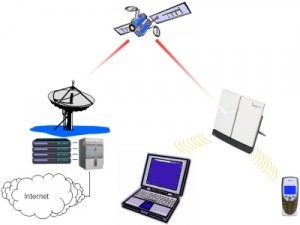 I can’t tell you how many trips I’ve made between Carson City and Las Vegas over recent years. Suffice it to say “lots.” And those long trips – especially between Indian Springs and Stagecoach – are like driving on the dark side of the moon. Because there is virtually no wireless coverage.

This situation is all too common, not only in rural Nevada, but across the country.

America’s current wireless broadband infrastructure is simply insufficient to meet the fast-growing demand generated by the popularity of smart-phones, tablets and other devices which enable Nevadans in Winnemucca, Ely, Hawthorne, Battle Mountain and even Round Mountain to connect to the rest of the world.

And as their usage grows, such devices will increasingly experience “dead zones,” dropped signals, and slower speeds because current wireless providers lack the capacity to meet the rising demand.

When it comes to increasing wireless capacity, the best solution is to develop something akin to property rights and let the market figure out the most efficient way to deal with the skyrocketing demand for wireless broadband. That’s the promise a company called LightSquared holds out.

With FCC authorization, LightSquared was mandated to build out a high-speed wireless network that covers at least 260 million Americans by 2015 – with a focus on the 50% of Americans currently underserved and with zero-to-limited wireless broadband. You know, like Nevadans in Beatty, Tonopah, Lund, Caliente, Amargosa Valley and Eureka.

LightSquared’s wholesale service would provide 100% coverage of the United States and 200 miles off each coast. Through a billion dollar satellite, LightSquared’s retail partners would be able to offer their customers the ability to dial someone from literally anywhere in the U.S.

The problem is, LightSquared’s spectrum is adjacent to the GPS spectrum – and the FCC has said it won’t allow the company to move forward until interference concerns are tested and mitigated. But LightSquared has already altered its deployment plans to prevent interference with more than 99% of GPS devices in use today, and has partnered with a GPS device maker to create a filter that solves interference issues for the remaining 1%.

Yet instead of coming to the table, the largest GPS manufacturers have decided instead to wage a political lobbying campaign against LightSquared.

In the end, it’s consumers in rural communities such as Austin, Hiko, Goldfield and Pioche who are losing big because of a GPS industry that wishes to prevent the deployment of a service that will generate significant competition in the wireless telecommunications sector.

If Congress and the FCC block this promising new network because of political pressure, they will have to answer to the millions of Americans who will continue to suffer through dropped calls, slow downloads, and rural “dead zones.” Including all 269 residents of Mina!