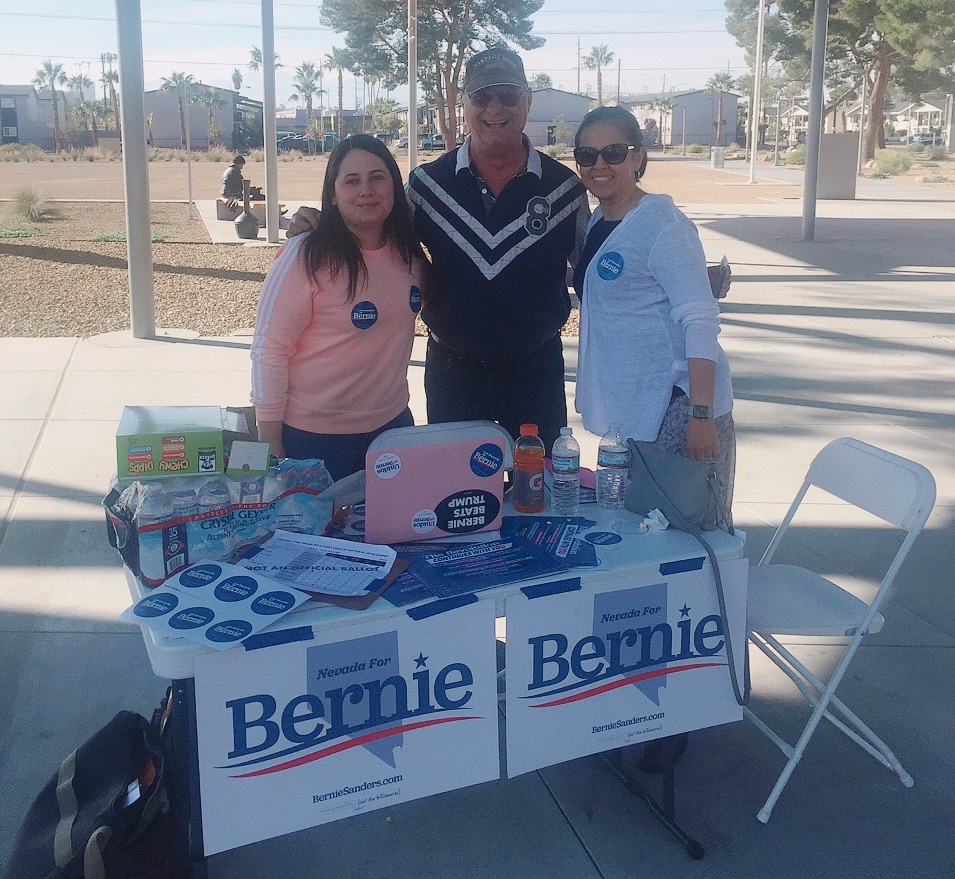 Some people thought I was kidding yesterday when I said I was going to take advantage of Nevada Democrats’ offer of same-day registration and early voting to switch parties and vote for Bernie Sanders in their presidential caucus.  (Operation Caucus Chaos)

Gia and I ventured to the early voting site at the IBEW Union hall yesterday afternoon.  But the folks milling around at the entrance and in the parking lot looked a bit surly.  Later in the day I learned the Rep. Dina Titus had been there, so that probably explains it. 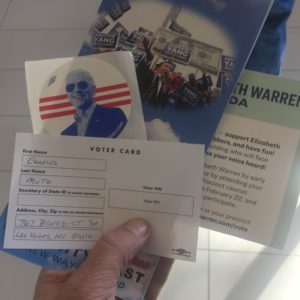 Instead, we drove down the road a bit and ventured into the East Las Vegas Library site.  Much more friendly environment.  Enthusiastic volunteers handing out literature in front of the entrance.

An Elizabeth Warren activist handed me her brochure and asked if I had any questions about her.  “Is she still a Native American?” I replied.  He kinda rolled his eyes and sheepishly said, “No.”

Inside the line moved quickly and orderly.  In and out in less than 10 minutes.  Everyone was extremely polite and professional. We re-registered and voted.

My 1 through 5 picks, in order, were Sanders, Gabbard, Yang, Bennett and Patrick. 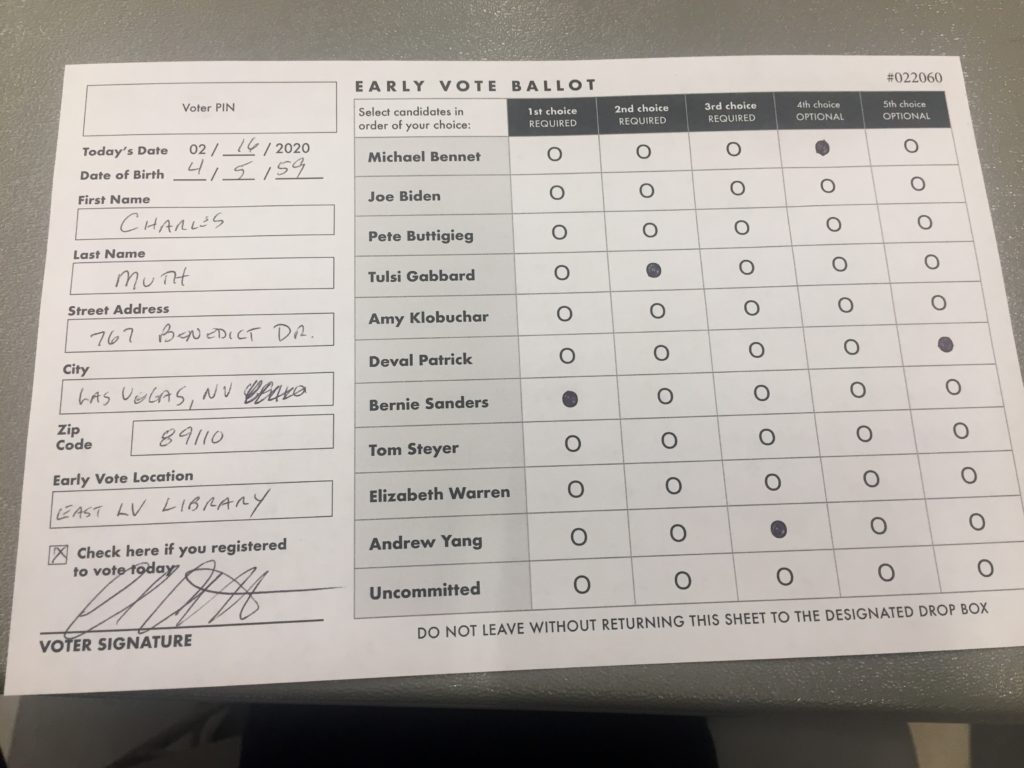 The only bummer was they didn’t have any “I Voted” stickers…which meant I couldn’t get my free doobie from The Source marijuana dispensary.

But after making my friend Clark County Commissioner Tick Segerblom, a “Bernie Bro’”, aware of the situation, he tweeted back, “I’ll make it up to you.”  He later joked on Twitter…

To which I responded…

“I can live with either one!”

It’s fun having political opponents with a sense of humor!

Of course, I’m not the only Republican participating in Operation Caucus Chaos.  There are quite a few more who might help tilt the scales in Bernie’s favor.  And there’s still two more days of early voting and the caucus itself this Saturday.

As they say, “Every vote matters.”

Alas, not all of my new Democrat brothers and sisters felt the same way as Tick.

After tweeting out a photo of me and two Bernie volunteers outside the library, a number obviously suffering from Trump Derangement Syndrome didn’t exactly roll out the red “Welcome” carpet for me.

I’m not feelin’ much love here!  I thought the Dems were the party of inclusion and diversity?

A few other Twitter trolls threatened to “dox” me and spread around my home address since I showed it in one of my photos.

Go for it, dudes.  As I responded on Twitter, my home address has been publicly known since I moved into my new house some ten years ago.  I’m not hiding.

And I’m not intimidated by such threats.  Just give me some notice for when you’re stopping by and I’ll put on coffee.

Lastly, allow me to point out that those whining and kvetching about my Operation Caucus Chaos live in glass houses.  Democrats have played this game, too.  Back in 2016, columnist Peter Beinart of The Atlantic urged Democrats “to take advantage of lax rules to vote for (Marco) Rubio.”

“…if I lived in any of the nine Super Tuesday states that allow non-Republicans to vote in their GOP presidential primary, I would cross over—forfeiting my chance to cast a ballot for Hillary Clinton or Bernie Sanders—and vote for Rubio. Other liberals should do the same. Those who can should write him checks. Whatever it takes to stop the nomination of Donald Trump.”

To wrap up, let me remind everyone of my two-fold purpose here…

1.)  I think a Trump-Sanders match-up in the fall will do the nation a great service by educating the public – especially our youth – on the comparative virtues of free-market capitalism vs. the evils of government socialism.

As Karen Martin, a Tea Party organizer in Spartanburg, SC told CNN, “Just for the sake of optics, it would be great to be able to contrast the ideology of an avowed socialist versus a capitalist.”  Amen.

My work here is done.

“Here’s reason to believe that calls for strategic crossover voting have some impact: After Limbaugh’s ‘Operation Chaos’ in 2008, 7 percent of primary voters in Texas showed signs of having crossed over to manipulate their rival party’s outcome. Granted, that’s not much. But in a very tight race, percentage points like those could go a long way.” – Elizabeth Bruenig, The New Republic, 2/29/16