Democrat for a Day: Join Me in Operation Caucus Chaos 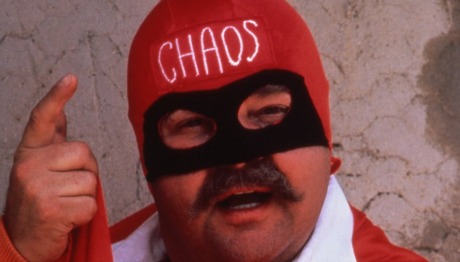 Donald Trump is gonna kick their arse.  Probably in a landslide.

And despite the “fake news” media’s herculean efforts to now paint some of them as “moderates,” all but one is a far-left liberal.  And the other is an avowed, self-described socialist.

I’m rooting for the socialist, Bernie Sanders.  And here’s why…

As my political mentor, Joe Gaylord – Newt Gingrich’s senior strategist back in the day – drilled into us at the Campaign Management College, all elections are about contrast.

And there would be no bigger contrast than a choice between Donald Trump and Bernie Sanders – on just about every level.

If we can’t beat Bernie, we don’t deserve to win.  But I have another reason…

I know this may come as a shock to you, but our government schools have done an absolutely putrid job at teaching our kids what it means to be an American; why freedom and individual liberty are so important. 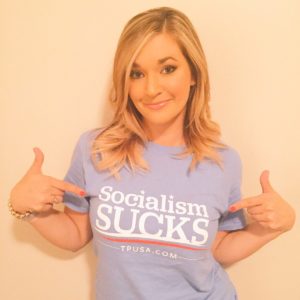 And why socialism sucks.

A Trump-Sanders campaign next fall would be a daily civics lesson for the youth of our country on the evils of socialism and the virtues of American free-market capitalism.  Let’s face it: They’re not going to learn it anywhere else – certainly not on our college campuses.

In addition, not only will Sanders be weighted down by his free-stuff-for-everybody, including illegals, ideology, but he’ll be running with three giant albatrosses around his neck who have endorsed his campaign: Reps. Alexandria “AOC” Ocasio-Cortez, Ilhan “I Love My Brother” Omar and Rashida “Impeach the Mother F-er” Tlaib.

This will not only help Trump keep the White House, but will go a long way to helping the GOP regain control of the House of Representatives.

Which brings us to the Nevada caucus…

Republicans are going to officially nominate Donald Trump by acclamation at a special meeting of the Nevada Republican Party next weekend in Pahrump.  There is no caucus for that purpose this election cycle.

But the Nevada Democrats’ presidential caucus will be held this coming Saturday, February 22.  And since Nevada Republicans don’t have anything to do as far as picking our champion, this presents a golden opportunity to throw a little chaos into the Democrats’ best laid plans.

Now, this isn’t a new idea. 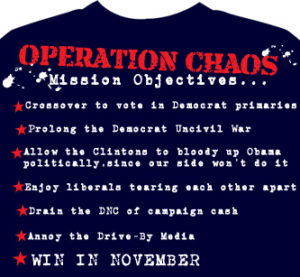 Medal of Freedom recipient Rush Limbaugh (yeah, baby!) came up with it in 2008, when he urged his Republican listeners to “temporarily cross over to vote in the Democratic primary and vote for Hillary Clinton, who at the time was in the midst of losing eleven straight primary contests to Barack Obama.”

I was reminded of Rush’s “Operation Chaos” last night when a longtime Nevada GOP strategist surprisingly told me he’d registered temporarily as a Democrat and cast his ballot for Bernie.

Now here’s the thing about that…

1.)  Nevada Democrats have been pushing for years for “same day registration” – a dumb idea fraught with opportunities for mischief and voter fraud.  They haven’t been able to get it passed in the Legislature, but have adopted it for their caucus.

So you can go into a caucus site, switch your party affiliation on the spot, vote in the caucus…and then switch right back afterwards if you want.

Democrat for a Day!

See how dumb this “same day registration” idea is?  But, hey, we didn’t make the rules.  Just playing by them.

2.)  The Democrats are also the party of early voting.  I think that’s a dumb idea, too.  Things can change in a Bernie Sanders’ heartbeat in politics.  But once you’ve cast your ballot…too late.

Also, early voting benefits incumbents and wealthy candidates.  Plus, the D’s always have a better early voting operation than Republicans.

That said, Nevada Democrats have added early voting to their presidential caucus this year – which, by the way, completely undermines that whole idea of holding a “caucus” instead of a primary.

Now people can show up at an early voting site and cast their ballots just like in a regular election without standing around for hours listening to political speeches and shuffling from room to room depending on which candidates are voted off the island in a series of ballots.

Early voting for the Democrats’ caucus started yesterday and runs through Tuesday.  So you can pop into one of the early voting sites, switch your party registration, vote in the caucus…and be back to your daily life in a jiffy.

Again, we didn’t make these rules.  Just playing by them.

3.)  The Democrat establishment “stole” the nomination from Bernie in 2016.  Everyone knows it.  And the party pooh-bahs are in an absolute panic right now with Bernie seemingly on the brink of grabbing the brass ring this time around.

They know, and a number have actually said so out loud, that a Sanders nomination probably means not only Trump’s re-election, but that Republicans will regain the majority in the House while holding onto the Senate.

A Crazy Bernie win in Nevada – especially with all the party establishmentarians, including Rep. Dina Titus, who I swear was weaned on a pickle, and Nevada’s own “AOC,” Yvanna Cancella, backing Sleepy Joe – would be one heckuva a turd in the nomination punchbowl.

4.)  Lastly, remember that it was Harry Reid’s “Saving Crooked Hillary” activation of the Culinary Union in 2016 that rescued Clinton here and set her on the road to the Democrat coronation.  The Culinary Union is the far-left political KGB of the Nevada Democrat Party.

This so-called political “power-house” took a powder in the Democrat caucus this year.  Went Swiss.  Pulled a Pontius Pilate.  Washed their hands and decided not to endorse any candidate this time around.

A real profile in courage.  Not.

But even though the Culinary opted not to outright support any particular candidate, it HAS made crystal clear it wants ANYONE BUT BERNIE.

So there’s another reasons for Republicans to vote for the Vermont socialist in “Operation Caucus Chaos.”

With all that being said, I’m planning to head out this afternoon, become a “Democrat for a Day,” and vote for Crazy Bernie!

Captain Chaos: “Dun Dun Dunnnn!”  (Gold stars to anyone who remembers that reference)

Maybe I’ll see if Gia and the girls wanna go and make it part of our “Super Family Sunday Fun Day” activities.  What a blast.

Now, if I’m reading things correctly, I think you have to also vote for at least a second and third choice on your ballot.

So my second choice will be Tulsi Gabbard.

She doesn’t have a prayer, but I like the fact that she’s filed a $50 million defamation lawsuit against Hillary Clinton and isn’t afraid to do interviews on FOX News.  Plus, she’s from Hawaii and that’s where I got married.

My third choice is going to be Andy Yang.  Yeah, I know he’s already dropped out, but he’s still on the ballot and, well, that’s the point.  So I’m gonna be a Yang Gang third-stringer!

Socialism sucks.  Same-day registration sucks.  Early voting sucks.  The Culinary Union sucks.  And what better way for Republicans to say “You Suck” than to become a Democrat for a day and vote in “Operation Caucus Chaos”?

See you at the polls!

P.S.  And as an added bonus, anyone wearing an “I Voted” sticker from the caucus can go to The Source marijuana dispensary in Las Vegas and get a free joint (with a $20 purchase).

Hopefully my friend Tick Segerblom will invite me over to his house for Bernie’s victory party and we can light it up together.  Man, being a Democrat sure can be fun!