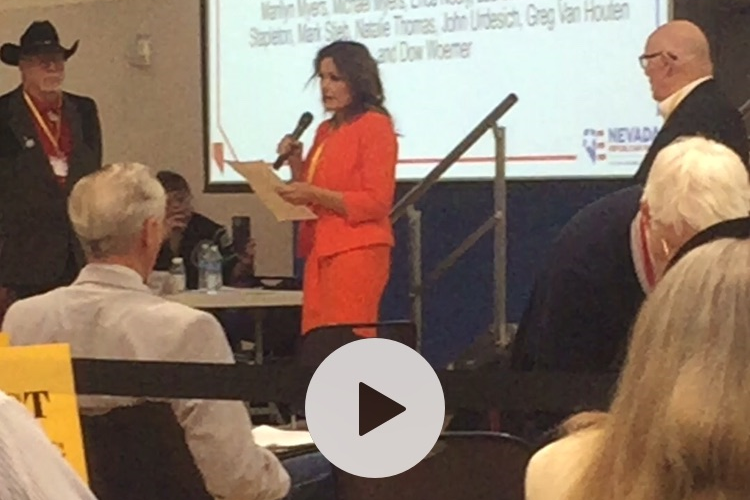 First, meet the new boss – same as the old boss.

McDonald’s #2, Vice Chairman Jim Hindle – one of the nicest, most efficient party leaders in the state – similarly beat back a challenge by Varlin Higbee (also a good guy by all accounts), 310-24.

And his Secretary, Barb Hawn, and Treasurer, Mike Bertrand, were re-elected without opposition.

I only stayed through lunch and the balloting, but the morning session was run professionally and efficiently while allowing dissent and disagreement to be expressed – the most embarrassing of which was a bizarre floor statement by Nevada State Sen. Carrie Buck.

But I’ll get to that in a minute…

Leading up to yesterday’s state party meeting, there’s been an ongoing war within the Clark County GOP for control, which I’ve written extensively about in the past.  The short version is this…

Former goofball Clark County chairman David Sajdak resigned after recessing the meeting to elect his replacement back in July.  The members of the Central Committee called themselves back into session days later and elected Jesse Law over Buck as their new chairman.

Shortly thereafter, the Executive Board of the Nevada Republican Party officially recognized Law as the rightful chair of the Clark GOP.  However, the ousted faction, led by tax-hiking RINO former-Assemblyweenie Steve Silberkraus and teachers union lobbyist Ed Gonzalez, sued and attempted to nullify Law’s election.

Nevertheless, about 100 rogue members of the Silberkraus-Gonzalez clown faction held a Zoom meeting on September 21 and elected Buck as their new court jester.  The three then filed another lawsuit seeking to overturn the ruling from the first lawsuit they lost.

Waste of time and treasure.  Too late.  That ship has sailed.  The train has left the station.  The toothpaste is out of the tube.  Losers lose and will lose again.  It’s what they do.

Anyway, with the county chair dispute settled, there remained a question as to which members of the Clark GOP were the official members of the NRCC.  That question, too, was also settled once and for all on Saturday.

First, the full body of the NRCC officially affirmed the Executive Board’s earlier recognition of Law as the Clark GOP’s official chairman.  It then proceeded to oust a couple dozen of the rogue Silberkraus-Gonzalez-Buck insurrectionists from the body and elected replacements.

Which brings us to the Washoe County GOP…

While not quite as bad as the Clark County vs. Nevada GOP feud, Washoe County GOP Chairman Michael Kadenacy has been crossing swords with McDonald for the past few years, as well.

Two weeks ago, members of the Washoe County GOP – tired of the petty, personal bickering – had enough and took matters in their own hands.  They passed a series of bylaws and rules changes over Kadenacy’s objections. Days later, Kadenacy quit, took his ball and went home.

I met the interim chairman, Mark Leonard, at the meeting yesterday.  Seems like a real stand-up guy who will conduct an election to replace Kadenacy late next month or early December.  Hopefully – likely – it’ll be someone who will fight with the Democrats instead of fighting with McDonald.

Now, all of this doesn’t mean there won’t still be pockets of resistance from dissidents, but their influence will be akin to those Japanese soldiers on deserted islands in World War II who didn’t get the memo that the war was over.

Despite fake news media claims to the contrary, the Nevada, Clark, Washoe and rural county GOP organizations now have all their oars in the water and are rowing in the SAME direction after the mutineers were tossed overboard.

Which finally brings me to the political suicide committed by Sen. Buck.  But first, let’s take a quick trip back in time in the Wayback Machine…

At the May 2012 Nevada Republican Party Convention, incumbent Republican National Committeewoman Heidi Smith faced two challengers in her re-election bid.  Here’s my dispatch from the front at the time…

“The most entertaining – actually, the ONLY entertaining aspect of the entire meeting, was watching Republican National Committeewoman Heidi Smith metaphorically douse herself with a 55-gallon drum of gasoline and flicking her Bic.

“Smith, of Washoe County, was being challenged by Carol Del Carlo of Washoe County and Dianna Orrock of Clark County. And she has been a friendly, if not loyal, supporter of the Ron Paul folks for the past four years. As such, I suspect she assumed she would have their backing.

“She assumed wrong…and it quickly became apparent that the Paul crowd’s pick was Orrock.

“So in her re-election campaign speech, Smith threw Paul under the bus; telling the gathered gaggle that Mitt Romney was the only way to defeat Barack Obama, and even went so far as to hold up a Mitt Romney sign before sitting down to a chorus of boos.

“It was a thing of beauty to behold. I mean, you do not get to witness a political suicide in person and in real time every day.”

Smith was crushed, and took down her Republican National Committee colleague – establishment RINO Bob List – in the process.  Orrock and James Smack went on to oust both.

To which, on Saturday, Sen. Buck said: “Hold my beer!”

But when she asked me back in March about siding with Sajdak and running to replace him as party chair, I STRONGLY advised against it.

As a political newbie – having barely just gotten elected in a “swing” district just months before and starting her first term in the Legislature – Sen. Buck had no idea what she was getting herself into.

She actually thought, naively, she could bring the warring factions together simply by the power of her personality.

Alas, Pee Wee Herman would have a better shot at bringing ISIS and the Taliban together in Afghanistan.  In any event, she ignored the advice and ran.

She then proceeded to undermine her entire campaign message of uniting the warring tribes by getting down in the mud with Sajdak’s detractors, going so far as to referring to them on social media as “vile creatures.”

The senator became the very thing she was running against.

It all culminated on Saturday when she committed political Hari-Carrie in front of the entire membership of the Nevada Republican Central Committee.

In prepared remarks after the Clark County GOP membership dispute was settled, Buck took the mic and proceeded to lecture the room; citing obscure statutes and accusing members of “flip-flopping like Mitt Romney.”

“This is still America, people,” she scolded, decrying the earlier vote to remove from membership the 26 mutineers.  “Before that,” she continued, “we had free and fair elections.”

Well, that elicited a smattering of groans and chuckles from members who suffered under Sajdak’s reign of error and for months were routinely blocked by nefarious means from being elected to the Clark GOP Central Committee.

Then out came the political wakizashi; the short sword used for ritual suicide.  Clearly agitated by the audience’s heckling response, Buck opted to play the “gender card.”

“Excuse me!” she snapped, interrupting her prepared remarks.  “Is this how the Republican Party is going to treat women electeds?  I’m sure the press will have fun with that!”

The room immediately erupted in loud boos and catcalls. The chair had to call for order.  Republican National Committeewoman Michele Fiore can be seen in my video of the tantrum walking in front of Buck and shaking her head in disbelief at what Buck just said.

Heidi Smith would be so proud!

But Buck wasn’t finished with her self-immolation.  She ended her prepared remarks with this…

“Our Founding Fathers had a word for such a practice as we witnessed today.  It’s called tyranny, and we’re not in a third-world country!”

She then angrily handed back the microphone and stormed off in a huff to continued boos and catcalls.

Buck never should have run for county party chair.  Buck should have gotten out of this intra-party tar pit at any one of the multiple chances for her to do so.

And she sure as heck should never have committed Hari-Carrie like she did at yesterday’s meeting.  But she’s learned nothing or is simply blind to reality.

“Sometimes, we need to call a spade a spade,” she or her grammatically-challenged ghost-writer wrote this morning using terminology that’d make Jon Gruden squirm.

“The Democrats have successfully figured out how to neuter this man,” she continued, referring to Chairman McDonald and his landslide re-election.  “Yesterday was a sad day and a gift to the Democrats.”

She signed her sour grapes whine as “CCRP Chairwoman.”

No, she isn’t.  At this point she’s simply delusional.  As Quintas said to Maximus in The Gladiator, “People should know when they’re conquered.”  Like the German barbarians, Buck clearly doesn’t.

At one time I thought she was simply being badly advised by the dumb-ass consultants, like Charles Gallagher, she unfortunately has surrounded herself with.  But at some point, you lose the benefit of the doubt and have to own your own bad decisions.

This is all on her.  She made this bed.  Now she’ll suffer the political consequences.  I expect a formidable GOP primary challenge in 2024 if she doesn’t resign before then.

Pity.  What a waste of potential.  She coulda been a contenda.

Nevada’s Queen RINO (Republican in Name Only), Assemblywoman Jill Tolles, has hung up her heels, announcing this week that she will NOT be running for re-election next year.

The Democrats she consistently voted with, along with liberal fake news media types such as blubber-blogger Jon Ralston, were saddened by the GOP sell-out’s announcement.

Conservatives and taxpayers, however, are doing the Snoopy Dance.

While I didn’t see this one coming, I wrote about the mass exodus from the terminally-incompetent Assembly Republican Caucus three months ago.  Half of the current members are now officially not running for re-election to their seats.

Newsmax reported on Tuesday that former Las Vegas Raiders coach Jon Gruden once wrote in an email that Resident Joe Biden was a “nervous clueless p*ssy.”