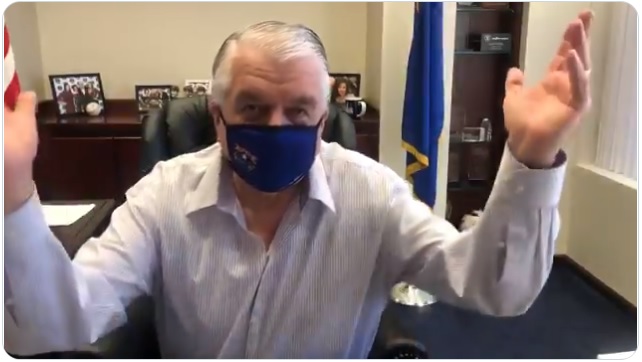 (Chuck Muth) – Nevada Gov. Steve von Sisolak and other Branch Covidian cultists continue to lecture, scold and berate us if we’re not wearing a face diaper 24/7 under pretty much all scenarios.

And since such admonitions make no logical sense in certain situations, they’re getting resistance instead of compliance.

And since Democrats and Joe Biden are leading the all masks/all the time brigade while Republicans and Donald Trump take a far more common-sense approach, the issue has become a partisan hot potato.

Democrats continuously issue blanket orders to “wear a mask” any time you leave your bunker for any reason, while Republicans take the more nuanced position of “wear a mask when you can’t social distance.”

When you see news reporters and elected officials wearing a face diaper on camera – especially Gov. Sisolak, with no one, including the maskless sign language interpreter standing behind him, anywhere near six feet of him – people naturally see the exercise as nothing more than a publicity stunt.

It’s simply not protecting anyone.  It’s all for show.  And everyone knows it.

Wearing a mask is also dumb – though feel free to do so if you wish; it’s still a free country (for now) – when you’re walking, jogging, driving or biking alone without another living soul anywhere near you.

At that point, you’re not wearing a mask to “stop the spread” or protect yourself and others, but to conform to social engineering being dictated by politicians and their enablers in the media who have “guilted” you into it.

The result has been a pandemic of stupidity spreading far and wide.  Here’s a recent, personal example…

Early on, Gov. Sisolak banned people from going to drive-in movies despite people watching from their cars.  Then he appeared to ease up on the drive-in movie restrictions.  So the drive-in in Las Vegas reopened.  For one night.

After being alerted to the drive-in’s reopening, Sisolak specifically shut them down again the very next day.

Weeks later it was reopened a second time.  But this time they were required to space everyone out so that no cars were parked immediately next to each other.

And fearing another #SisolakShutdown reversal, the theater forced you to sit in the bed of your pickup truck rather than sitting on a folding chair in front of your tailgate.  OUTSIDE.  Fully social distanced by way more than six feet.

With the weather now being absolutely perfect to sit outside and watch a movie at the drive-in, I took the fam last weekend to see the Scooby-Doo double feature.

All cars were again spaced out into every other spot.  And I set my chair up just outside the driver’s door so I could best hear the sound coming from my car radio.  Again, nowhere near even close to six feet of anyone else.

Nevertheless, and invoking the Sisolak Rules, a theater employee confronted me and ordered that I move my chair in front of my car rather than sit outside next to the car’s open window.

On one hand, I get it.  As a business, better safe than sorry…especially since the theater had been targeted by Sisolak’s Mask Police in the past.  But come on.  This defies common sense.

If Gov. Sisolak and his nanny-state ilk would recognize and acknowledge that masks are only recommended when you CAN’T socially distance, they’d get much more buy in for their policies by the general public.

It also doesn’t help when people see the absolute stupidity of requiring people to wear a mask to enter a restaurant but then allow them to take it off and leave it off for the duration of their meal.

I’m no medical expert, but I’m pretty sure the ‘rona doesn’t suddenly stop spreading just because you have a hamburger in your mouth.

And don’t even get me started with Sisolak clamping down on Trump rallies while supporting the Black Lies Matter “peaceful riots.”

Or blaming people for having birthday parties at their private homes when thousands of out-of-state tourists are allowed to pack casino floors.

The inconsistency and contradictory nature of Sisolak’s imperial edicts is readily available for all to see.  They make no sense.  Which is why so many people continue to ignore his scoldings.

They realize his orders are based on politics, not science.

The governor’s bad judgment and mismanagement of the CHINA-19 virus, his contradictory and discriminatory “winners & losers” rules, his almost total failure at communicating his message, and his administration’s embarrassing failure by DETR to process unemployment claims, means he’s lost ALL moral authority to dictate “non-essential” mask wearing.

When the governor says, “Mask Up,” a lot of people are responding with “Up Yours!”

And that isn’t going to change no matter how often or loudly he lectures and tries to shame us.  It’s not COVID fatigue people are suffering now.  It’s Sisolak fatigue.

“It’s been 94 days since Sweden reduced COVID-19 deaths to near zero without lockdowns or mask mandates.” – Dr. James Todaro

“Reminder that statistical analyses have shown lockdowns have had no effect on the rate of spread. They only cause economic destruction.” – Geoffrey Lawrence

“If you don’t wanna get shot by police, DON’T charge at them with a knife.” – Ian Miles Cheong

“If worried black parents supposedly submit their children to ‘The Talk’ to warn them of the life and death importance of respectfully following police officers’ instructions, why do so many blacks refuse to do so?” – Larry Elder

“President Trump is gaining ground because more and more Americans understand that the jobs went to China while Chinese money went to the Bidens.  In state after state Trump is pulling ahead as Biden’s corruption and cognitive problems defeat him.” – Newt Gingrich

“Joe Biden has been the most dangerous kind of racist his whole life: innuendoes, jokes, winks and nods. His treatment of Justice Clarence Thomas was indeed a ‘high tech lynching.’  To see Justice Thomas swear in Justice Amy Coney Barrett last night brought tears of joy to my eyes.” – James Woods