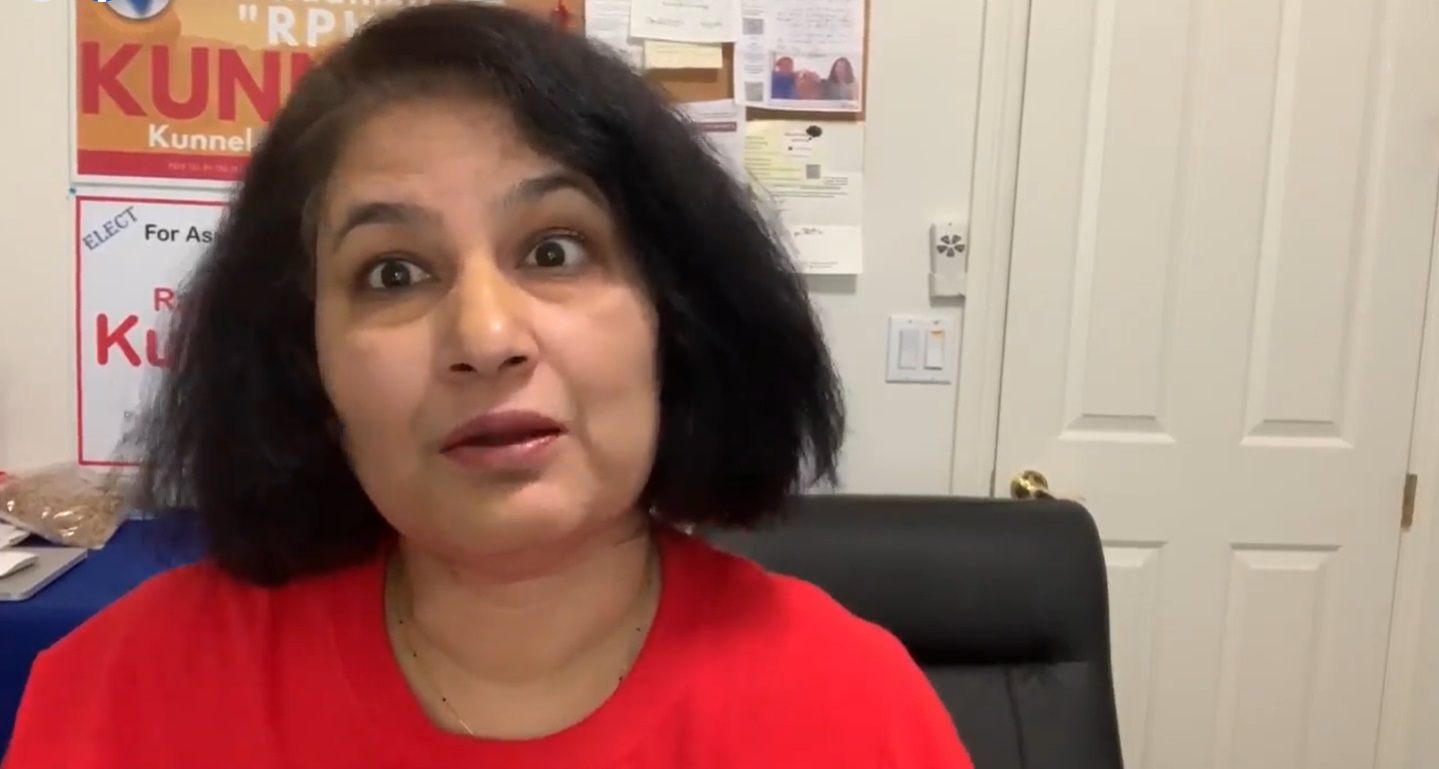 The seat is currently occupied by term-limited Assemblyman John Hambrick, the last – and WORST – back-stabbing Republican sellout who broke his word and voted for the largest tax hike in Nevada history in 2015.

Republicans have a 969-voter registration advantage in the district, with almost 10,000 registered non-partisans.

The GOP candidate is Heidi Kasama, an extremely successful businesswoman who has signed the Taxpayer Protection Pledge promising to oppose and vote against any and all efforts to increase taxes.  Exactly what we need right now.

Her Democrat opponent, Radhika Pochampally Kunnel – who thinks it’s cute and clever to refer to herself as “RPK” – is a liberal university associate professor who’s been endorsed by a Who’s Who list of leading Socialist-Democrats, including Harry Reid and State Sen. Yvanna “YDC” Cancela (Nevada’s #AOC).

RPK’s campaign website says she’s a graduate of the Boyd School of Law, though she doesn’t appear to have passed the bar yet.  But that certainly hasn’t kept her out of court.

The RPK Story – based on legal research done through public records I’ve obtained – is long, ugly and bizarre.  Indeed, RPK appears to have been involved in more cases than Perry Mason and Matlock combined!

She also appears to be – how to put this gently? – nuts.

That’s not a medical diagnosis.  I’m quoting a judge in one of the many domestic court cases RPK’s been involved in, who declared that the wanna-be assemblywoman “needs assistance from a mental health professional.”

Understandably to a point, it appears RPK began to go a little cuckoo for Cocoa Puffs back in 2007 after reportedly discovering her then-husband, Dr. Vijayendra Jaligam, had an affair and got another woman, Michele Boutin, pregnant.

The subsequent divorce and custody fights have been messy…as many are.  But I’m not going to get into the salacious details.  That’s between them.  However…

The court documents, and what they say about this woman’s obsession, paranoia and mental instability, are absolutely relevant in a political campaign for elected office.

The divorce was finalized in July 2008…but the custody battle has raged on for the last 12 years.

RPK was initially granted custody of the couple’s two children and given permission to move to Jackson, MS to take a new job.  The following year she was fined $500 for violating the visitation agreement and ordered to pay $1,500 in legal fees.

In 2011, Boutin filed for a protection order against both RPK and Dr. Jaligam, alleging that RPK had been threatening her and “was trying to intentionally inflict psychological harm/damage” to the child she had with Jaligam.

In September 2014, the visitation agreement was changed, with the judge stating the RPK “does not appear to place the needs of her children over her own desire to punish Dr. Jaligam for his past transgressions.”

It was the same judge who said RPK “needs assistance from a mental health professional.”

But she reportedly continued to violate the visitation agreement.

So one month later a judge awarded sole custody of the daughters to Dr. Jaligam and ordered RPK “to not have any contact or communication with the children until she underwent professional therapy and was given written authorization by the court.”

The judge also ordered the children to undergo therapy “to deal with issues of parental alienation by their mother.”

RPK appealed the decision to the state Court of Appeals and the Louisiana Supreme Court.  She lost both.

She also filed a federal lawsuit in 2015 against her ex-husband alleging physical and mental abuse and sought hundreds of thousands of dollars in damages.  She eventually dropped the suit.

She filed another lawsuit in federal court in 2017 claiming she had a “psychological impairment” and had been discriminated against in violation of ADA (Americans with Disabilities Act) rules.  She asked for a return of custody of the children and sought millions of dollars in damages.

She eventually dropped this suit, too.

That same year, RPK filed yet another lawsuit against her ex-husband’s attorney alleging all sorts of abuse, defamation, libel and slander.  That suit was thrown out by a judge.

She then went back to court in February 2018 claiming her human rights had been violated and demanded visitation rights.  Request denied.

A few months later RPK was again found in contempt and ordered to pay past fines and legal fees.

And as recently as August – in the midst of her political campaign – this obsessed, unstable, litigation-happy would-be state legislator was still complaining in a media interview that various judges, lawyers and doctors have all conspired against her.

Paranoia will destroy ya.

The last thing Nevadans need, especially at this time, is someone with such an extensive and troubling history of mental instability serving in the Legislature.  Things are crazy enough in Carson City these days as is!