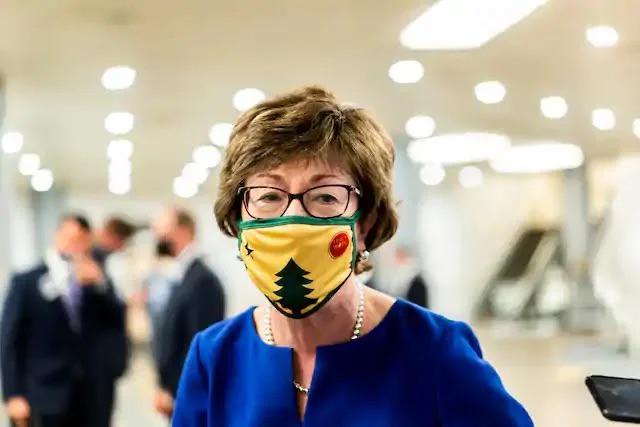 (Chuck Muth) – Sen. Susan Collins (RINO-Maine) was the ONLY Republican to vote against highly-qualified and brilliant Amy Cohen Barrett’s confirmation to the U.S. Supreme Court.  On the other hand, she DID vote to confirm uber-liberal justices Sonia Sotomayer and Elena Kagan.

If Collins’ vote against ACB was the only anti-GOP transgression by the liberal Republican, that’d be one thing.  But the senator has a long and deep history of not being with the GOP on big issues when they’ve needed her most, including her vote against repealing ObamaCare.

Collins often embarrasses the party with her votes and rhetoric and gives the other side “bi-partisan” cover on controversial issues.  She’s pro-abortion and soft on guns.  Her lifetime rating from the American Conservative Union is a putrid 46 percent.

She should be culled from the herd.

Collins’ wishy-washy swamp-dwelling defenders, however, point to the narrow majority Republicans have in the Senate, 53-47.  Fine.  Fair point.  However…

The GOP can “trade up” on Tuesday simply by ditching Collins and replacing her with John James, a potential rising star who’s running to flip the U.S. Senate seat in Michigan.  No net loss for Republicans, but a definite plus-one for conservatives.

Or, as is more likely, the GOP could cancel out the Collins loss by picking up the Democrats’ seat in Alabama, where Tommy Tuberville is expected to knock out incumbent Sen. Doug Jones.

And get somebody up in the bullpen to take out RINO Alaska Sen. Lisa Murkowski in the Republican primary in 2022.

And – hello, Utah Republicans! – please, PLEASE replace Sen. Pierre Delecto – a.k.a., Willard Mitt Romney – in the 2024 GOP primary and give us the conservative senator we all deserve from your conservative state.

It’s not enough for conservatives to just elect more Republicans.  We need to elect BETTER ones, as well.

And that goes for Nevada, too…

“The next few days will be a Cat 5 hurricane of mainstream media spin and Democrat bullSchiff designed to make you think that you’ve already lost this election. They want your morale shattered, your spirit broken, and you to put a lid on your participation in saving your country from leftist tyranny.  It’s all a lie.  It’s a psychological operation designed to keep you on the sidelines.” – Columnist Kurt Schlichter

“If we want to continue to have the opportunity to pursue the American Dream, and not evolve into a socialist America and have the government run your life, then I strongly recommend you consider Donald J. Trump for another 4 years.  I certainly have and have already cast my vote for him!” – Golf great Jack Nicholas

“My Vote is for what makes this country great, freedom of speech & religion, 2nd Amnd, hard working tax paying citizens, police & military. In this election, we have freedom of choice, which all should respect. For me & these principles, my Vote is for @RealDonaldTrump.” – NFL great Brett Favre