Secondly, we’re back from our annual Citizen Outreach Baja Cruise.

And yes, a good time was had by all – even though the weather, while not terrible, was less than ideal this year.  Partly cloudy each day and occasionally chilly. 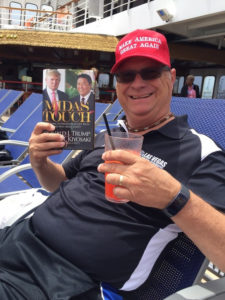 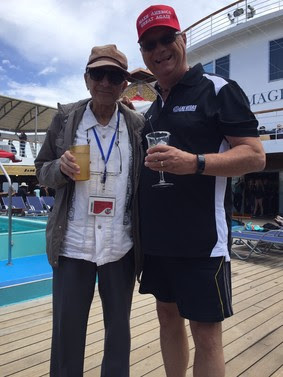 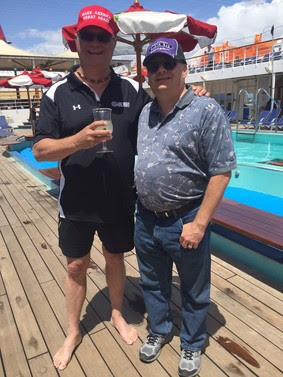 And yes, I stepped WAY out of my comfort zone and braved this Indiana Jones-like rope bridge to get to the top of a mountain peak in Ensenada so I could zip-line for the first time… 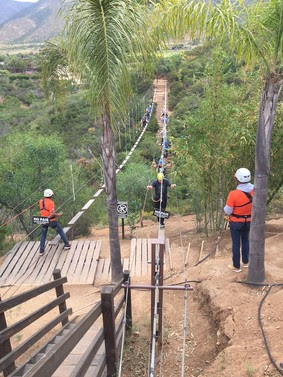 Fun, yes.  But I think I’ll stick with the Lido Deck from now on!

P.S.  As regular readers know, my 15-year-old daughter Jenna had to put down her dog, Prancer, a couple weeks ago.

But I knew she’d also developed a particular interest in a breed of dog I’d never heard of before: Belgian Malinois.  I also knew she had gone on Pet Finder and found a 9-month-old, female Belgian Malinois/German Shepherd mix named “Kay von Hoorst” at a rescue facility in Los Angeles.

The week before the cruise, Gia and I secretly completed the adoption application to rescue “Kay.”  And before heading to Long Beach for the cruise, we surprised Jenna by stopping by at the rescue center just so she could see the dog she’d been reading about online.

It was an immediate “love connection”! 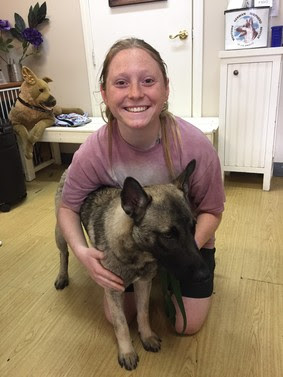 We then further surprised her by telling her the adoption had already been approved and if she wanted her, “Kay” was hers.  Guess what Jenna’s answer was? 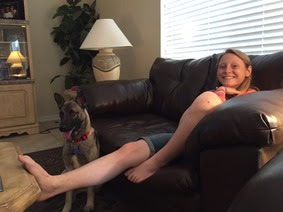 OK, let me get this straight…

A government bureaucrat who chairs the Gaming Control Board secretly taped a conversation with Republican Nevada Attorney General Adam Laxalt over a year ago without Laxalt’s knowledge or permission, turned the secret recording over to the FBI, which then investigated what was said in the conversation, and determined that absolutely nothing illegal occurred.

As a refresher, here are just some of the types of extremely serious crimes the FBI investigates, in addition to public corruption, to remind everyone just how well-equipped and experienced the agency is to do investigations: Terrorism, weapons of mass destruction, murder, kidnapping, organized crime, counter intelligence and cyber-crime.

Despite the professional investigators at the FBI declaring “there’s nothing to see here” over the secret “Laxalt Tapes,” part-time State Assemblywoman Maggie Carlton (D-Culinary Union) – a coffee shop waitress with no law enforcement experience whatsoever – intends to launch her own Clouseau-like investigation into the matter this week with hearings.

No, this isn’t a political hit job against Laxalt, is it?

Look, any Democrat-led legislative hearing on this year-old closed case will be nothing but political theater.  A circus show trial.  A kangaroo court.  A star chamber character assassination.  And everyone knows it.  Everyone. Including Carlton.

So one of two things should now happen…

1.)  Assembly waitress Carlton should announce that upon further consideration she trusts the professional investigators at the FBI and is dropping her absurd partisan hearing, complete with a public apology to Attorney General Laxalt for dragging his good name, as the Las Vegas Review-Journal put it in an editorial today, through the mud with nothing more than “rumor and innuendo.”

2.)  If Assembly waitress Carlton proceeds with her clownish hearing, the minute she opens her mouth about it every Republican in the room should get up and walk out in protest. There is absolutely no reason whatsoever for any Republican legislator to sit there and legitimize this political hatchet job.

One of the few substantive bills to pass the 2015 Nevada Legislature was a TOTAL ban on lobbyists giving gifts of ANY kind to legislators.  Not even a bottle of water.  Unfortunately…

AB 396, sponsored by Assemblyman Skip Daly (D-Organized Labor) would repeal that ban by allowing “little” bribes of up to $20 in value.  If approved, that $20 bribery cap, of course, will go up each and every future legislative session as surely as the sun will rise tomorrow in the east.

Shamefully, every member of the State Assembly – including all 15 Republicans! – voted to gut and kill this common-sense gift-ban law. Apparently even Republican elected officials can’t live without an occasional “free lunch” from a favor-seeking lobbyist.

Legislators DO look at these vote tallies before voting on controversial bills, as will the Governor’s office when weighing whether or not to veto a bill.  So thank you for weighing in and making a difference!

“I had assumed the Democrats’ votes were for sale.  I just didn’t know they’d admit it only took $20 to buy them off.” –Republican Nevada Senate Minority Leader Michael Roberson on Democrats’ bill to reverse the total ban on gifts from lobbyists to lawmakers