Tell CNN Kathy Griffin Has To Be Fired 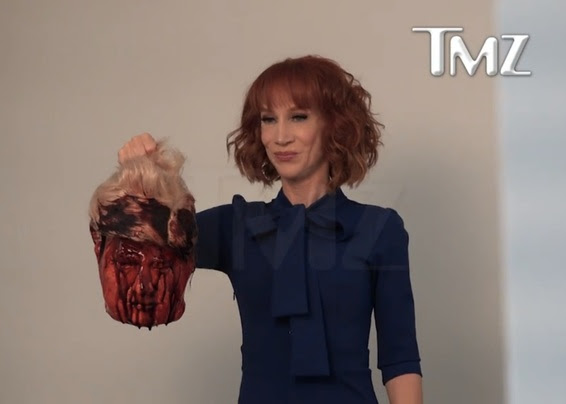 Griffin’s choice – and it was a conscious choice to promote herself – to share an image of her holding what  appeared to be the bloody severed head of President Donald Trump was so outrageous and offensive that Squatty Potty, the designers and creators of Squatty Potty® toilet stools and Unicorn Gold® bathroom products, has dropped Griffin as its spokesman.

We urge CHQ readers to call CNN headquarters, their phone number is (404) 827-2300 to demand that Kathy Griffin be fired for choosing to promote herself with such a vulgar and offensive image.

P.P.S.  OK.  You go into a store.  You give the cashier your money.  The cashier gives you your change…without saying “thank you.”   This drives me nuts…especially since my upbringing results in a “thank you” from me for returning my change.

Unfortunately, this is becoming all too common.  And I’ve gotten to the point where I wait to see if the cashier says “thank you” before I do.  And I’m half-tempted now to just stand there and wait and hold up the rest of the line until this tiny but deserved courtesy is offered.

Something tells me this is gonna cause problems.  Somebody alert my lawyer.

“If you’re thinking already, you might as well think big.  It is your choice.  No matter what your circumstances, nobody can stop you from thinking big.” – Donald Trump

(Victor Joecks / Las Vegas Review-Journal) – Uber is so popular the taxi industry has turned to a last-minute legislative Hail Mary to try and push rideshare companies out of Nevada.

It didn’t work, and the competition has Nevada taxi companies feeling the pinch.

Fiore and Ross campaigning door to door, not face to face

Something New Stinks in Storey County

(Sam Toll / The Storyteller Online) – Readers of the BardeBlog may have noticed in the second to last edition (read it here) that the return of the zombie apocalypse is gathering by the Fourth Ward preparing to parade down C Street. Two lifelong members of the Storey County Payroll club are “retiring” on June 30, 2017.

In the real world when someone retires, they get the party, they get the 25 year pocket watch and if they work for the public they get 70% of their salary or the rest of their life as they head off into the sunset. Sadly, here in Storey County, we live in the surreal world.

“Kathy Griffin should be ashamed of herself. My children, especially my 11 year old son, Barron, are having a hard time with this. Sick!” – President Donald Trump on Twitter, 5/31/17