Understanding Trump: Newt Gets It 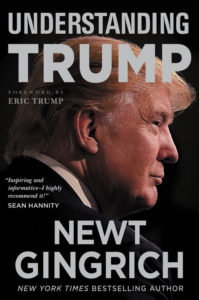 The forward was authored by Eric Trump, President Donald Trump’s son.  He writes…

“Many books will be written by the very people who got it wrong (about my father winning) and, quite frankly, who continue to get it wrong, but this book will stand apart because Newt was one of the few who got it right – he is a friend and he was there from the beginning.”

But not just from the beginning of the Trump Insurrection.  As Gingrich explains…

“Trump represents the third – and hopefully final – great effort to break away from a half-century of big government liberalism dating back to the administration of Lyndon B. Johnson.  The first big push came in 1981 when President Ronald Reagan took office.  The second was in 1994, when we signed the Contract with America.”

Gingrich was a rising conservative star in Congress in the early ‘80s and had a front-row seat for the Reagan Revolution as a key ally.  And he was the commanding general in the Republican Revolution in 1994 when the GOP regained control of the House of Representatives after 40 years of wandering in the political desert.

And he was arguably the First Surrogate for Trump during the 2016 campaign, traveling all over the country advocating for an uprising against the Washington establishment and draining the swamp.  Indeed, after Trump secured the GOP nomination, Gingrich was seriously considered as his vice presidential running mate.

“The Left and much of the media are horrified, because the age-old power structures on which they rely are specifically the ones President Trump is seeking to demolish and rebuild.”

And he understands that Trump “has experiences and lessons from life and business that no other president has had.”

If you already get it, “Understanding Trump” will be a welcome reminder that you were right and they were wrong.  And that you’re on the right side of this chapter in American history.

If you don’t get it, but are willing to keep an open mind, “Understanding Trump” will help you…understand Trump.

But if you’re suffering from an acute case of Trump Derangement Syndrome, well, no explanation is possible.  Get yourself to a safe space and curl up with a therapy puppy.  We’ll call you if we need you.

P.S.  The REAL Chamber of Commerce Gala Dinner featuring Tomi Lahren is this Friday.  Enter the promo code “chuck” and automatically receive 30% off the ticket price.  CLICK HERE to RSVP and order your tickets.

“Another key characteristic of Trump is that he is an entrepreneur, not an academic.” – Newt Gingrich, Understanding Trump (2017)

(Brent A. Jones) – The 2017 Nevada Legislature has come to an inglorious end.  Much as I hate to say “I told you so” as it relates to my prediction that Gov. Brian Sandoval was going to sell us out on ESAs…I told you so.

On the other hand, much of the Democrat-proposed anti-business legislation in the most anti-business session in state history either didn’t get passed or has been vetoed by the governor.  Consider it a “stay of execution.”

Because make no mistake, the anti-business lobby will be right back at it in 2019.  And unless a pro-business candidate is elected to replace Sandoval – as Republicans have little chance of winning back control of either the State Senate or the State Assembly in 2018 – things could go bad in a hurry.  Really bad.

“Even today, months after Trump won the election and was sworn in as president, the news media still tries to cover him as if he were a normal politician, and his ideological opponents continue to be viciously dishonest.  They are either clueless or lying. Ignore them.” – Newt Gingrich, Understanding Trump (2017)