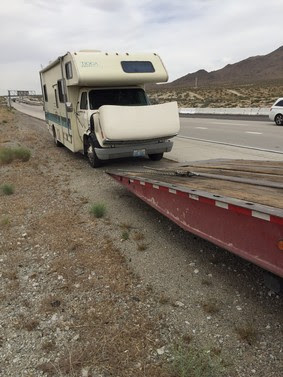 OK, so my weekend birthday camping trip with the family didn’t exactly turn out as expected.

I woke up last Wednesday (my actual birthday) with some kind of computer problem that tied me up all morning and most of the afternoon.  With the problem still unresolved by the tech guys, Gia and I loaded up the three kids and three dogs and headed for Southern California.

Laid up in Calico for the night so we could visit the Calico Ghost Town Thursday morning before lighting out for our rendezvous with friends at their mountain retreat in Warren Springs, a bit northeast of San Diego.

Got just past Barstow when I heard something pop and noticed white smoke billowing out of the tailpipe.  It was NOT signaling the selection of a new Pope!

Pulled off interstate, did a quick check of the muffler bearings and smoke-shifter, and called Good Sam for a tow.  After sitting on the highway for a few hours, we were finally towed to an RV repair shop down the highway about 30 miles in Hesperia, CA.

As we didn’t get there until around 4:30 pm, the shop owner – a great gun-lovin’/Trump supportin’ conservative – said they wouldn’t be able to take a look until Friday morning.  So I rented a car from Enterprise and loaded the wife, three kids and three dogs for a rather crowded and uncomfortable 3-hour drive back to Las Vegas.

To make a long story short, the engine is completely blown.  So I need to drive back down to Hesperia today to arrange to have the “Money Pit” towed back to Las Vegas to have a new engine put in.  In the meantime, my computer problem still hasn’t been fixed.

Not exactly the best way to start my 58th year on the planet.

But everyone survived and is safe – and that’s all that’s really important. There will be other family camping trips.  And the beat goes on…

P.S.  My friend Grover Norquist of Americans for Tax Reform advises that Republican New Mexico Gov. Susana Martinez has vetoed 52% of the bills passed by the Democrat-controlled Legislature there – 145 out of 277.

After-Action Report: Just to be clear on last week’s Las Vegas City Council vote NOT to put the city’s monopoly franchise agreement for trash collection up for public competitive bidding…

The issue was NOT a choice between extending the contract an additional 12 years to Republic Services or to give the contract to someone else.  A contract, by the way, that will either cut the number of trash pickups from twice-a-week to once-a-week OR double your service fee to keep twice-a-week pickup.

A crappy choice if you’re a city homeowner.

The real issue was whether or not to allow other companies, in what should be a free market, an OPPORTUNITY to simply bid on the contract.

If Republic’s service and contract terms are truly so great, they should have had no problem winning the extension against all comers in a public bidding process.  But thanks to Councilmen Beers and Anthony, they don’t even have to break a sweat.  They were handed this billion dollar contract on a silver platter.

“A biographer who is writing a book about former President Barack Obama claims that Obama once called America ‘a racist society’ in an unpublished manuscript from his law school days.” –Breitbart News, 4/10/17