Clown Show at Clark County GOP May FINALLY be Over 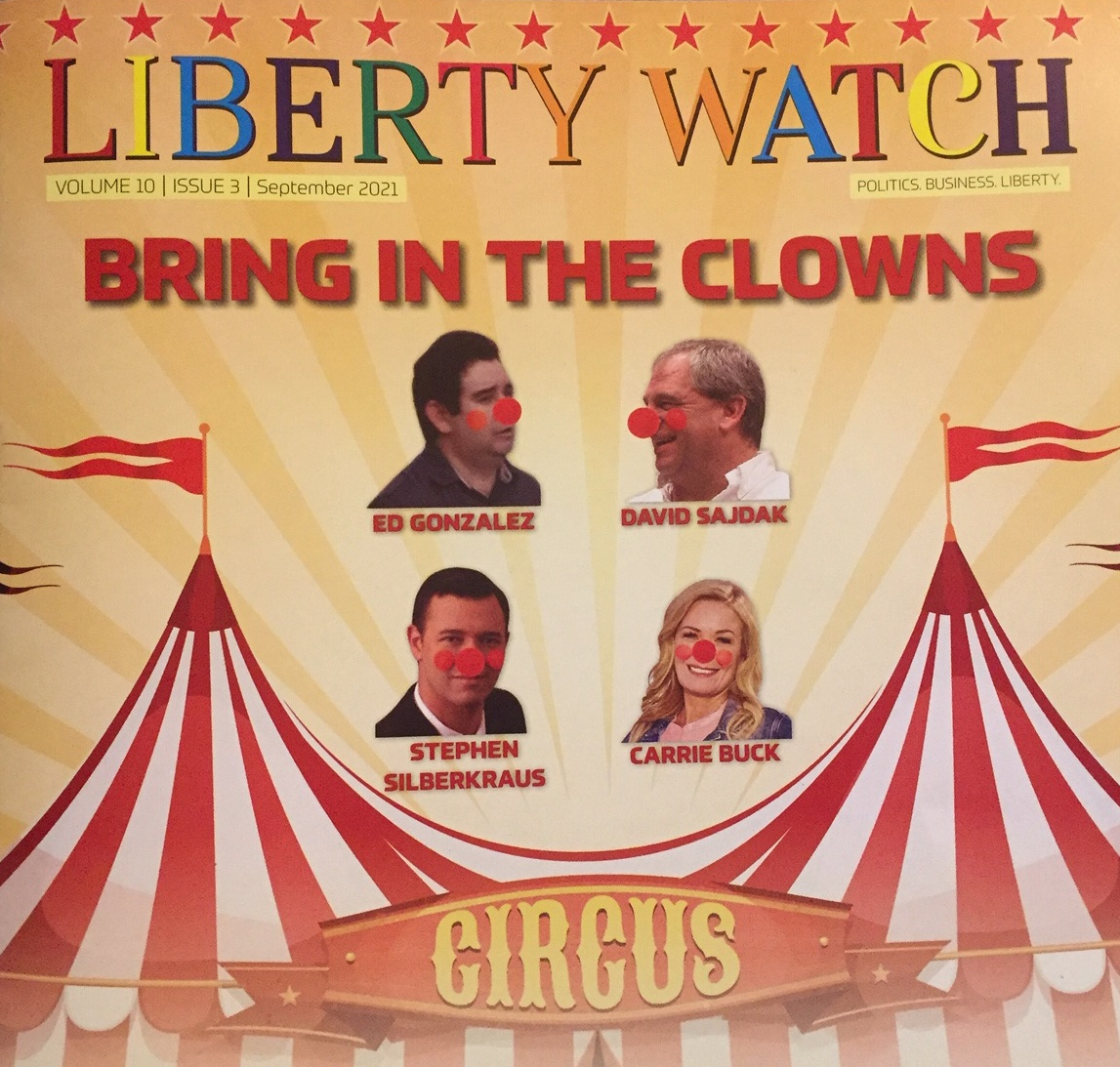 (Chuck Muth) – Major court ruling today on the ongoing brouhaha over who is the rightfully-elected new chairman of the Clark County Republican Central Committee.

I’m not going to rehash it all here.  You can access my previous reports on my MuthsTruths.com blog.  But the most relevant was this one.

The former regime and “acting” officers under the mismanagement of Head Bozo/Chairman David Sajdak were celebrating what they believed was a major victory in court just last week when a retiring judge sided with them based on inaccurate information she had been provided.

They spiked the ball and did the Snoopy Dance in the end zone last Thursday.  “Acting” (in every sense of the word) Chairman Steven Silberkraus gloated in an email after the ruling…

“At a hearing this morning Clark County Judge Elizabeth Gonzalez declared that the rogue group’s sham meeting and election were not proper and therefore Judge Gonzalez issued a court order invalidating both. … With this issue now resolved finally and conclusively, it is time to proceed with the regular business of the CCRP including our membership meeting and our elections.”

A couple of phrases come to mind…

Because of the false information the previous judge relied on, Jesse Law – who was duly elected and recognized by the Nevada Republican Party after the recessed election that took place on July 28 – asked for reconsideration of last week’s decision by a new judge.

The hearing was this morning.

Congratulations (or condolences) to CHAIRMAN Law.

The Silberkraus clowns and the losing candidates for chair – including State Sen. Carrie Buck – can still try to keep this mess going.  But I’m pretty sure you can stick a fork in them now.  They’re done.

The party’s over.  Turn out the lights.

The rule in politics is you can’t beat somebody with nobody.  Adam Laxalt is clearly the DC establishment’s boy.  His nomination in the GOP primary next June was considered a done deal from the professional consulting class.

But Sam’s definitely going to give him a run for his money.  This won’t be the cakewalk the Team Laxalt folks thought it was going to be.

In fact, I know a reporter at POLITICO has been asking questions about this race – I was interviewed – and am hearing that Laxalt and/or his campaign have feverishly been trying to spike the story.

Before he left Las Vegas, Sam and I discussed and he signed the Taxpayer Protection Pledge, with me and former Clark County Republican Party Chairman George Harris (pictured with Sam below) serving as witnesses … 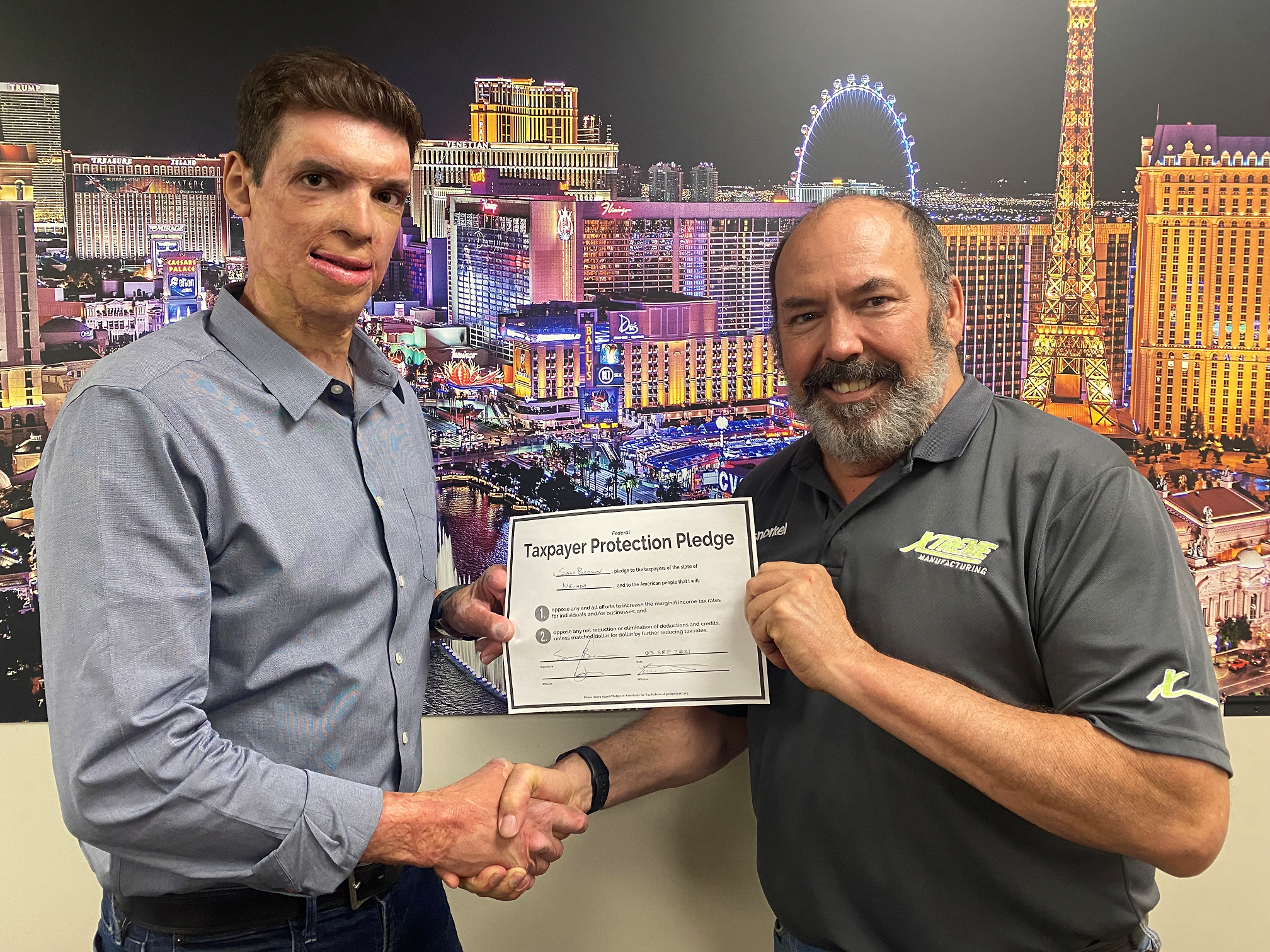 I’m assuming Adam will now do so also…he signed it as a gubernatorial candidate in 2018…but have to wonder why he didn’t do it right out of the gate instead of letting Sam beat him to the punch?

Anyway, here are a few more sample emails I’ve received over the past few days about this race…

* The Wall Street Journal reported this morning that “President Biden is requiring that all federal workers and millions of government contractors be vaccinated against Covid-19.”  Of course, I oppose any such government mandate; however, government employee unions consistently support Democrats so I’m not going to lose any sleep over them reaping what they’ve sown.

* The ACLU – if you can believe it – has actually moved even FURTHER to the left in recent years than they already were.  So when it lists conservative Nevada State Assemblywoman Annie Black as “the legislator most likely to vote ‘no’ on” bills supported by ACLU Nevada, that’s actually a badge of honor.  Wear it proudly, Annie!

* I hadn’t read a fiction novel since the last Harry Potter book.  But a good conservative friend here in Nevada wrote a very interesting book, “Backstory: A Novel,” based on the notion of Jesus returning to earth and setting up shop in Detroit, MI of all places.

The book, which is not political in any way, is authored under a pseudonym, Shelby Michaels, to avoid getting cancelled by the wokesters on the left.  If you want a good read and support a good conservative, click here to buy the book on Amazon.

* Had lunch this week with Guy (pronounced “ghee”) Nohra, GOP candidate for governor.  Still need to learn a lot more about him and his planned campaign, but I can tell you this much: He has a lot – a LOT – of money.  And if he spends it wisely in his campaign, his competitors would be fools to take him for granted.  He’s got a certain *something* that could appeal to voters who are sick of the entire political establishment on both sides of the aisle.

Indeed, his introductory kickoff video – which the “professional” consulting class hates – is actually damned good from a marketing standpoint. It ain’t like the cookie-cutter crap we’ve become accustomed to from most candidates.  If you haven’t seen it yet, click here.

* Top GOP gubernatorial candidates as of today: Mr. Nohra, Sheriff Joe Lombardo, North Las Vegas Mayor John Lee, former U.S. Sen. Dean “Never Trump” Heller, attorney/anti-COVID lockdown firebrand Joey Gilbert and a passel of others who haven’t gained traction yet.  In a field like this, a third of the primary vote could take the nomination.

* Also met with CD4 candidate Carolina Serrano.  She has a lot going for her, but I can’t help but think she’d be better off shooting for a state legislative seat this cycle rather than trying to start off at the congressional level.  But we’ll see how she develops as a candidate.  Some GREAT potential.

* Have had only casual conversations with CD4 candidate Tony Lane, but he drove all the way out to Pahrump last night to attend my “15 Worst Mistakes of Losing Candidates” workshop. As a first-time candidate, that’s a big point in my book.  And he’s got the kind of personality you just can’t help but like as soon as you meet him.  There’s definitely something “there” there.  Something special.  I’ll keep you posted after he and I have a more extensive conversation about his campaign at lunch tomorrow.

*  Speaking of Pahrump: Assemblyman Greg Hafen – who currently represents that district – isn’t the worst-voting Republican in the Legislature.  Then again, he’s far from being a solid conservative-voting Republican.  Nor is he a boat-rocker.

A district as solidly GOP as this one deserves a far more solid conservative representative who won’t just vote “right,” but LEAD “right” on the political battlefield.  And a pair of such challengers weighing a bid were also at my Pahrump “boot camp” last night.  Voters next June just may have a golden opportunity to “trade up.”

* Former state treasurer Dan Schwartz – a moderate Republican described by his own consultant as a “crappy candidate” – has entered the race for lieutenant governor (not secretary of state as I incorrectly noted in the last Muth’s Truths).

Las Vegas City Councilwoman and Republican National Committeewoman Michele Fiore has been expected to toss her bonnet into this ring but hasn’t pulled the trigger yet.  If she opts to seek re-election rather than this seat, conservative Assemblywoman Annie Black might just take a look at this race.

September 22 in Las Vegas: Click here
Sponsored by THE Clark County Republican Party
Hosted by the Ahern Family of Companies

“When you’re dead, you don’t know you’re dead.  All of the pain is felt by others.  The same thing happens when you’re stupid.” – Author (who may have been thinking about blogger Rob Lauer) unknown