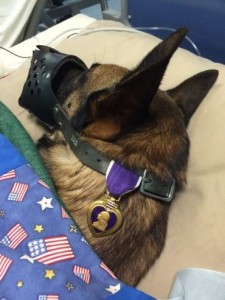 This photo of “Rocky,” a German Shepherd war dog serving in Afghanistan, wearing a Purple Heart for injuries sustained in battle, has “gone viral” thanks to the Internet and social media.

“Spc. Andrew Brown, 22, and his military dog, Rocky, were searching a structure for explosive materials in southern Afghanistan’s Helmand Province on Dec. 3 when the bomb exploded, said Sgt. 1st Class Michael Garrett, the public affairs officer for the brigade.

“The soldier and dog survived the blast and were taken to a military hospital in Germany. … Brown has since been taken to Walter Reed Army Medical Center in Washington, D.C., for treatment.  The dog ‘is still being treated in Germany for a few more days,’ Garrett said.”

Rocky suffered shrapnel wounds and a broken leg in the explosion.

Click the “NEXT” button below to read the stories of 21 other heroic war dogs through the years, from World War I to the War on Terror…