In a campaign eerily similar to that of Jonathan Gruber – the MIT professor caught on tape admitting that it was necessary to mislead and deceive voters about ObamaCare due to “the stupidity of the American voter” – Nevada Gov. Brian Sandoval is now pushing a billion dollar tax hike despite unmistakable and undeniable campaign promises to the contrary.

“During his campaign for governor in 2010, Sandoval vowed that under no circumstance would he raise taxes. And extending the so-called sunset taxes, first passed in 2009 and set to expire in two years, amounted to a tax increase, he said.  He broke that promise in 2011…”

Indeed, back in his 2010 Republican primary race against conservative Gov. Jim Gibbons, Sandoval sold himself as “A Conservative Leader We Can Trust.” 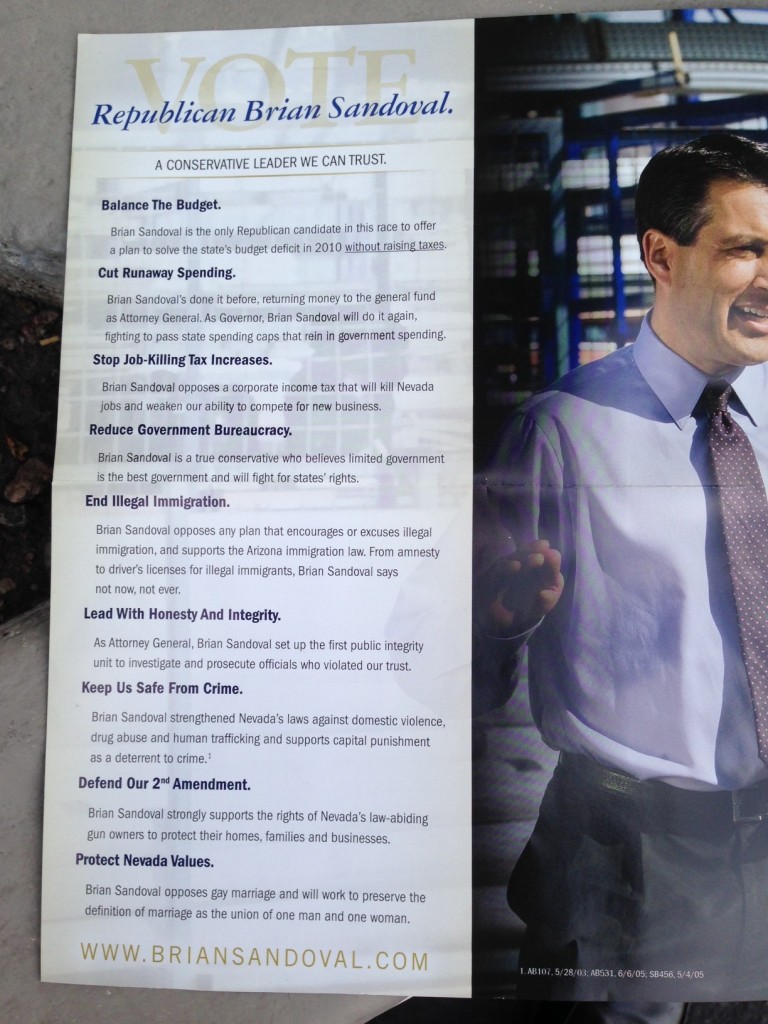 Guess it all depends on your definition of “Conservative” and “Trust.”

In his campaign brochure, Sandoval claimed to be the “only Republican candidate in this race to offer a plan to solve the state’s budget deficit in 2010 without raising taxes.”

Yes, that was Sandoval who underlined the words “without raising taxes,” not me.

Sandoval also promised he would “Cut Runaway Spending” by fighting for “state spending camps that rein in government spending.”

This was a reference to a proposal – the Tax and Spend Control (TASC) initiative – originally pushed forward by former conservative State Sen. Bob Beers in 2006.  Sandoval got elected…and hasn’t done a thing to impose spending caps to rein in government spending.

Sandoval promised to “Stop Job-Killing Tax Increases,” especially a “corporate income tax that will kill Nevada jobs and weaken our ability to compete for new business.”

But this month the governor proposed a new $440 million tax on Nevada corporations that will be based on…the income of the corporations!

Sandoval promised to “Reduce Government Bureaucracy,” claiming to be a “true conservative who believes limited government is the best government.”  Yet under his watch, government bureaucracy has continued to expand, not retract.

Sandoval also promised to “End Illegal Immigration.”  His campaign brochure declared: “From amnesty to driver’s licenses for illegal immigrants, Brian Sandoval says not now, not ever.”

“Not ever” turned out to be a very short time.

On May 31, 2013, Reuters reported that “Nevada’s Republican governor (Brian Sandoval) signed a bill on Friday to authorize driving privilege cards for illegal immigrants…in a ceremony at the state Capitol.”

Yet another broken promise.

Sandoval promised to “Defend Our Second Amendment” and claimed he “strongly supports the rights of Nevada’s law-abiding gun owners to protect their homes, families and businesses.”

Yet he dilly-dallied and waffled back and forth on whether or not to sign a gun control bill in the last session and never lifted a finger to help pass the Amanda Collins Law to allow conceal-carry permit holders to carry their weapons for self-defense on campus.

Sandoval promised to “Protect Nevada Values,” declaring his opposition to gay marriage while pledging to “work to preserve the definition of marriage as the union of one man and one woman.”

Now, I personally disagree with the governor on this issue.  Nevertheless, he did make that promise.  But when it came time to fight a court decision overturning Nevada’s constitutional ban on gay marriage, the governor quit the fight.

It might have been the right thing to do, but it was nevertheless another broken promise.

Overall, Sandoval promised to “Lead with Honesty and Integrity.”

But in addition to breaking all manner of campaign promises – including support for school vouchers – he ran for re-election last year and hid from voters his intent to sock us all with a billion tax hike.

I guess it all depends on your definition of “honesty” and “integrity.”

Back in 2000, a Clark County commissioner named Lance Malone promised to vote against an application to build a neighborhood casino in his district.  He then turned around and broke his promise, which resulted in a mail campaign funded by Stations Casinos headlined “You Just Can’t Trust Lance Malone.”

Until that time, Malone was considered squeaky-clean.  He was a former Metro police officer with pretty hair and a sunny smile.

But if a man’s word in no good; if he fails to honor the promises he makes as a political candidate, it should come as no surprise when that lack of honesty and integrity creeps into other aspects of his life.