You Asked for It, You Got It…Campaign Boot Camp is BACK!

(Chuck Muth) – OK, I conducted my first one-day Campaign Boot Camp at the Ahern Corporate Headquarters in Las Vegas on January 15. Since then, I’ve gotten a number of requests from folks who missed it asking if I’d “do it again.”

So, tentatively pencil in…

Once the dates, venues, costs, etc., are confirmed, I’ll let everyone know.

As a reminder, here’s what we’ll cover…

For those who attended the January 15 Boot Camp, your graduation certificates will be going out in the mail this weekend.  Let me know if I got the spelling of your name wrong and I’ll send a new one. 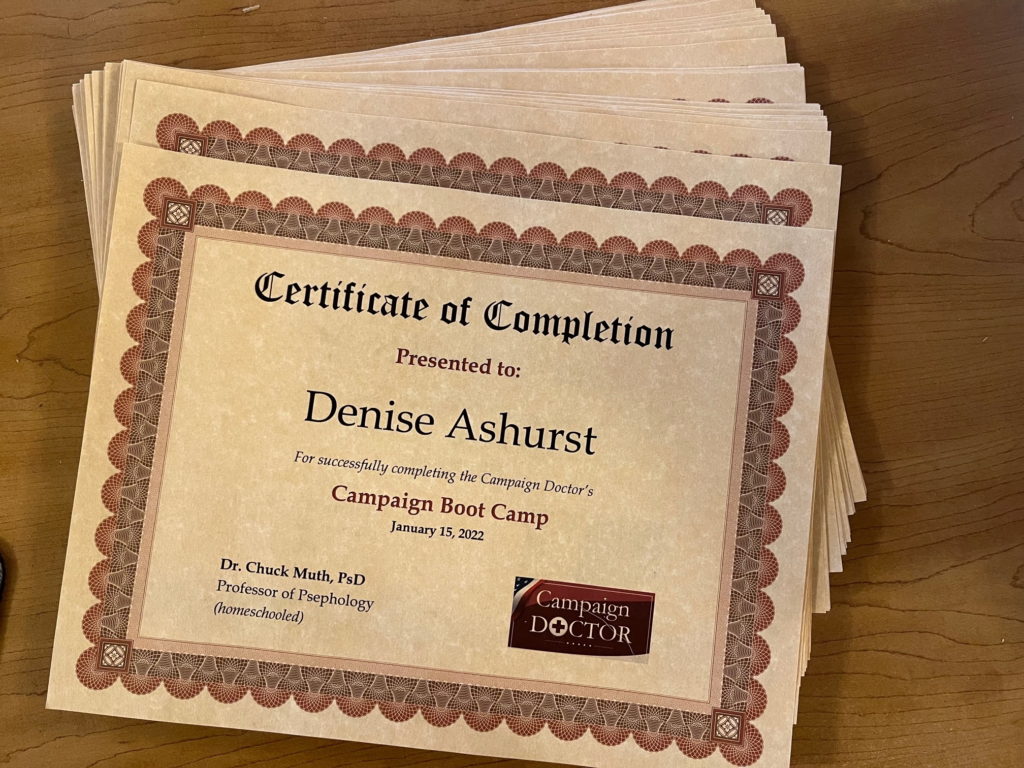 For those wondering if it’s worth it to attend one of the upcoming Boot Camps, here’s what some of my psephologists-in-training who attended the January 15 seminar had to say…

“I didn’t know the first thing about running a campaign and was initially intimidated by all of it. Chuck really simplified everything.  Super-informative and engaging.” – Mary Lim

“This is the best one-day course I have attended.” – Robert Thomas III

“Entertaining, educational. Worth every minute.  Chuck knows his stuff! Everyone running for office or pushing an issue should go to his class.” – Dave Gibbs

“I flew into Vegas from Reno to attend Chuck’s boot camp. It was very informative and fun.” – Shanda Golden

“It was a lot of information to take in. So glad I wrote everything down.  Guess what?  We received a $5,000 donation thanks to what we learned.  That was confirmation to me that it’s not hard.  We can do this!” – Danette Hyt

“Sensational. I learned so much.  There are no words for how grateful I am to have learned more in one day than what’s offered by campaign managers.” – Socorro Keenan

“This was a remarkable class! So many ideas and thoughts outside the box.  Thank YOU again so very, very much for a uniquely satisfying experience!  You made it fun and informative! I was never watching the clock wondering ‘Will this ever end?’  The time flew! – Kim Snyder

“Chuck delivered practical ideas I can implement immediately. The Campaign Boot Camp was worth 20 times more than what I paid.” – Mark Robertson

“Chuck was fantastic, engaging and extremely knowledgeable on every aspect of campaigning. As someone who has taught sales training and seminars, I give him an ‘A’.” – Brian Nadell

“This is/was a great place to start out in the political process. The Doc is a great communicator.  This Boot Camp was jam-packed with helpful information.” – Catherine Pretlove

“Hey, Chuck. I was really impressed with the boot camp; it was exactly what I was looking for.” – Catherine Pretlove

“Many people get involved in politics without the realization that success revolves around marketing. This seminar will positively impact just about any campaign.” – Eddie Facey

“I just want to let you know that was one of the single, best seminars I’ve ever attended. The materials, the presentation, the fun, the insight – all so well put together. Thank you, thank you. You gave me easily at least five to six ideas I never thought about.  Left me yearning for more.  Thank you, Dr. Muth.” – Chris Roman

“I wish every candidate, campaign manager and volunteers would go to your boot camp early enough.” – Rosana Romero-Correa

“Chuck calls ‘em like he sees ‘em. He speaks from his vast experience and anyone who does not get something beneficial from his seminar was not paying attention.” – Bill Newyear

“Hello, Chuck. I loved the class this past weekend! I took pages and pages of notes. Loved the info.  I will use it in my campaign.” – Alan Bigelow

“If you are interested in running for public office, you should attend Chuck’s boot camp. You might be scared at first about what you’ll need to do, but then he explains how you can easily do it.”  – Tom Summers

“Chuck gave an enjoyable, fast-paced and humorous presentation. I had no idea of the ins-and-outs of campaigns and learned a tremendous amount.  Thank you!” – Nichole Stoke

“I wanted to thank you for the excellent training and information you shared at your recent campaign bootcamp. We learned so much. Consider us doctors-in-training now!  The training and the stories you shared were so helpful and practical.” – Nancy Brune, Ph.D. 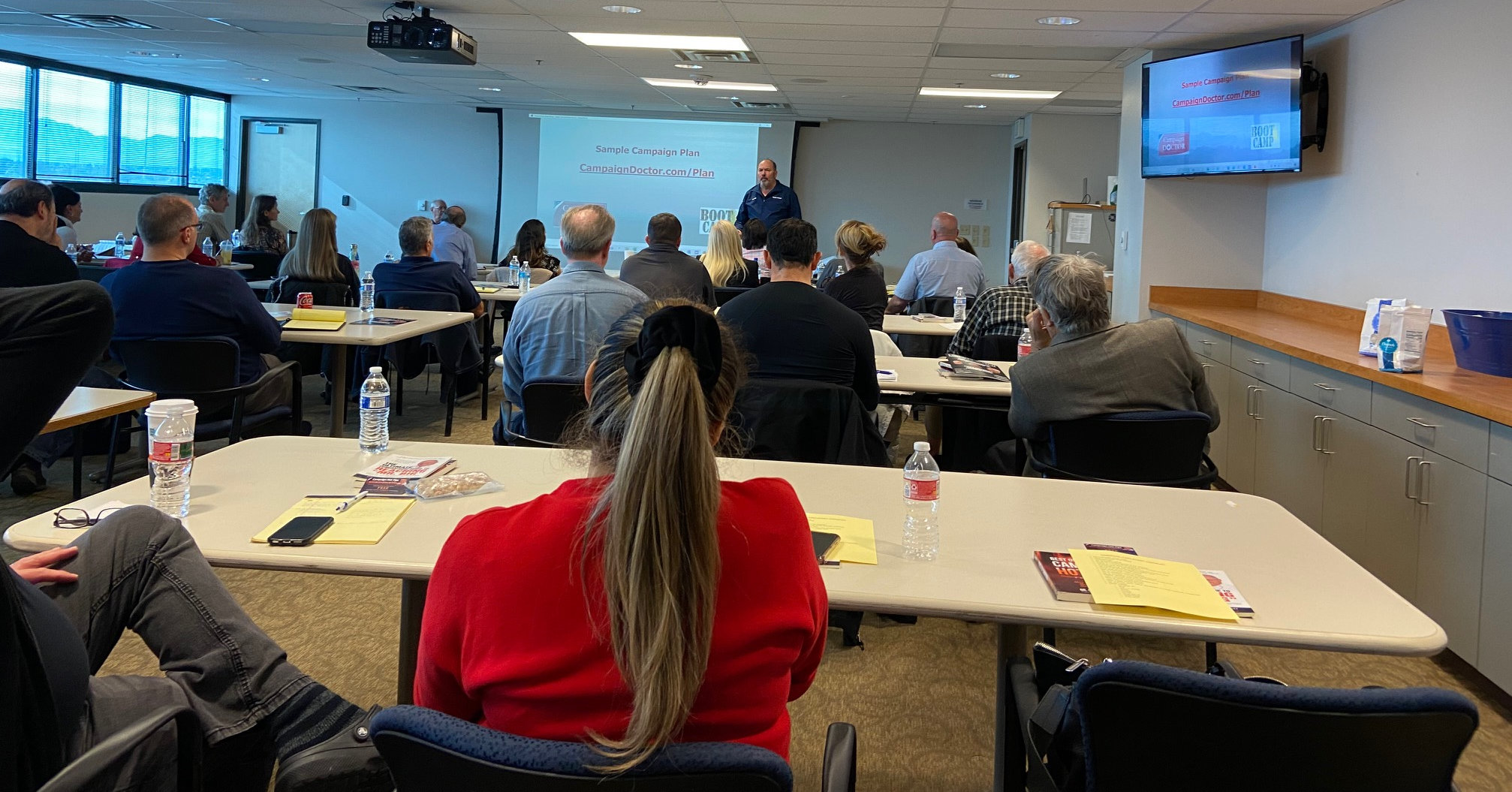 If you’d like to host a Campaign Boot Camp in your city or town, send an email to chuck@campaigndoctor.com for more information.

P.S.  Big shout-out to January 15 attendee Kim Snyder who brought me a huge chocolate bar from Trader Joe’s instead of an apple.  She read me like a book!

*  The candidate reportedly weighing jumping into the GOP primary for attorney general against Sigal Chattah is Las Vegas attorney Tisha Black, who ran unsuccessfully for Clark County commission four years ago.  Expect an announcement within the next week if she decides to pull the trigger.

*  Conservative Republican Gary Schmidt is running against incumbent GOP Assemblyman P.K. O’Neill in District 40 in the Carson City area.  O’Neill is one of the sell-out Republicans who voted for the largest tax hike in Nevada history during the 2015 session.

*  Mark Robertson’s campaign announced it raised an additional $90,000 in January for his bid in Nevada’s 1st Congressional District.

If you’ve already signed and your name is not on the list, please forward a copy of your Pledge to chuck@chuckmuth.com.  If you need a copy of the Pledge to sign, shoot me and email noting what seat you’re running for and I’ll send it to you.

Rob Lauer and AOC were sitting outside their pup tent at the Lake Mead campground one evening.

AOC downed a shot of Alien Tequila, turned to Rob and asked, “Which do you think is farther away, Florida or the moon?”

Rob put down his Shirley Temple and replied, “Hellooooooo!  Can you see Florida?”

“I don’t see how Joe Biden can last another year. His creepy whispering is getting stranger. He can’t read a Teleprompter. His anger is uncontrollable. He can barely walk. He doesn’t even know what he’s saying. This is so embarrassing. We’re the laughingstock of the world.” – @catturd2