Why I Re-Joined the Republican Party

As you probably read, Clark GOP Chairwoman Cindy Lake graciously asked me to emcee the dinner – an honor I last enjoyed 18 years ago when I was, myself, the Clark County GOP chairman (newly-elected John Ensign was my keynote speaker).

At the start of the program, my co-emcee, Jeri Taylor-Swade, presented me with an award plaque that reads: “Nevada’s Consistent Conservative Voice.”

Now, I gotta tell ya…other than maybe “Good Father” I can’t think of any award that I could possibly value higher. Being consistent in one’s philosophical beliefs ain’t easy in a day when so many are so willing so often to sell out so easily for so little.

But enough about Sen. Michael Roberson.

Before I stepped down off the stage, Jeri asked me to come back to the podium, saying she had something else for me.

At that point she pulled out a voter registration form and invited me to rejoin the Republican Party…which I left in 2007…clearly believing it was a long shot request that didn’t have a snowball’s chance in Hades of being accepted. 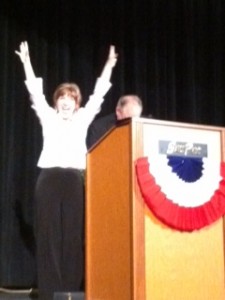 But I shocked her and the hundreds of rank-and-file GOP foot soldiers in attendance by signing it right there on the spot! Here’s why…

The #1 reason people don’t donate to a political campaign or cause is because they’re not asked.

The #1 reason people don’t volunteer for a political campaign or cause is because they’re not asked.

And the #1 reason a lot of people aren’t registering as Republicans – especially disaffected conservatives like me who left the party and registered independent years ago – is that no one has asked.

But I wouldn’t make a decision to come back just because I was asked. In fact, I’ve been asked to come back on a number of occasions over the last six years and have always declined (though I did re-register briefly in 2010 just to vote for my friend Sue Lowden in the GOP primary that year).

So what was the difference this time?

But most importantly, she’s a doer, not a talker.

Secondly, the Clark County Republican Party recently went on record, just before the start of the legislative session, saying they will hold elected Republicans accountable for violating their campaign promises and the party’s platform.

No more tail wagging the dog. No more looking the other way. The CCRP again stands for something and appears willing to impose a little discipline on those who wander too far off the reservation.

Again, two true believers. Level-headed. Not afraid of controversy. And predisposed to running TOWARDS the sound of the cannons instead of away from them.

And then there’s the national level.

No, I’m not a huge fan of Mitch McConnell or John Boehner; however, the two faces of the GOP that beamed across our TV and video screens last week following Obama’s State of the Socialist State Address were Sens. Marco Rubio and Rand Paul.

Now THAT’S a Republican Party I can get excited about!

And in addition to Rubio and Paul, we also have emerging and solidly conservative GOP Senate boat-rockers such as Mike Lee in Utah (100% ACU rating), Tom Coburn of Oklahoma (100% ACU rating) and Pat Toomey of Pennsylvania (90% ACU rating).

Oh, and let’s not forget newly-minted conservative, tea party-backed Sen. Ted Cruz from Texas, who has been joined in the Senate by former Rep. Jeff Flake (100% ACU rating last year).

On the House side, conservative, tea party-backed Republicans have pretty much been sticking to their guns and have been a solid roadblock for a lot of bad stuff coming from Obama-Reid.

And then there are conservative chief executives such as Wisconsin Gov. Scott Walker, who shoved collective bargaining right up the government employees’ collective wazoos and lived to tell about it!

And Michigan Gov. Rick Snyder who stared Big Labor in the face and signed a right-to-work law in what was once considered the biggest union state in the nation.

And Louisiana Gov. Bobby Jindal who has taken on the all-powerful teachers union in an all-out push for school vouchers.

And Kansas Gov. Sam Brownback who is pushing hard to repeal his state’s income tax.

So there’s a lot to be positive about in today’s new-and-improved Republican Party…yet still a lot of work to be done and a lot to be worried about.

But in case you think this means I’m now going to ease up a bit on Gumby Republicans…think again!

On the other hand…

Not only didn’t Gov. Brian Sandoval attend this singularly most important annual GOP fundraising event in the largest county in the state – just like how he blew off the Nevada GOP’s bi-annual convention last spring – he didn’t bother to send a representative, nor did he even do the bare minimum of at least sending a letter of support to be read to the party activists in attendance.

Inexcusable from the man who is supposed to be the Republican Party’s titular head. (I guess when Slanker tells the governor not to go somewhere, the governor doesn’t go there.)

Now maybe one or two of these guys and gals had a valid excuse for not being at the dinner in person. However, not one of them bothered to at least send a note of regret to be read to the audience saying, “Hey, sorry I couldn’t be there, but thank you all so much for all you do for the Republican Party!”

Nor, to the best of my knowledge, did any of them buy a ticket and say, “Hey, I can’t be there, but please give my ticket to a volunteer who might otherwise not be able to afford the dinner.”

Yet you can be sure every one of them will be sniffing around next year looking for support and volunteers and donations for their re-election bids!

Which is why, now that I’m back, I intend to aggressively press forward with a party operations change that I’ve been advocating for 18 years now: Pre-primary endorsements.

When only 2 out of 14 elected state legislators from Clark County show up at the annual Lincoln-Reagan Dinner…it’s time to say enough is enough.

And as I said in my closing remarks at the dinner Saturday night – stealing a line from The Gipper himself – if you thought I was bad as an independent before re-joining the GOP…you ain’t seen nothing yet.