Who Would Use Their Broken Leg to Put out a Fire? This Man… 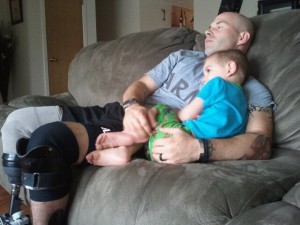 I’ll let Operation Finally Home – a non-profit organization that teams up with builders to build new, mortgage-free homes for wounded and disabled veterans – give you the gist of Stephen’s story:

“Sgt. Jackel served multiple tours in Iraq and Afghanistan. His long list of service awards includes a Purple Heart, an ARCOM-4 Award for Valor and an Afghanistan Campaign Medal with two Bronze Stars, among others.

“In August 2011, while performing convoy security duties in Afghanistan, an IED exploded under the vehicle he occupied with his team. After the blast, Sgt. Jackel saved the lives of his team members by helping get them out of the vehicle and physically put out a fire inside the vehicle with his own leg. He sustained injuries resulting in required bilateral leg amputations as well as a traumatic brain injury.”

Can you imagine that?  Using your own broken leg to put out a fire and save the lives of your brothers in arms?  As President Reagan famously asked, where do we find such men?

In Sgt. Jackel’s case, I found him at an event at the House of Blues in Las Vegas last January.  After brief remarks about his experience and Operation Finally Home, I watched in amazement as the man danced the night away on his two prosthetic legs.

To say he danced better than me with my two good legs ain’t sayin’ much.  I can’t even do the Hokey-Pokey.  But it was an absolutely amazing sight and Stephen’s “nothing can stop me” attitude is as American as apple pie and cheating on your taxes.

Last March Sgt. Jackel took his daughter to the amusement park only to be prohibited from riding the roller coaster.  “Without one fully functioning leg,” the park attendant told him, “you are not gonna be able to ride this ride.”

Can you imagine?  Where do we find such idiots?

I can tell you where you WON’T find them: At Stoney’s Rockin’ Country nightclub in Las Vegas from 5-7 p.m. on the Fourth of July.  Citizen Outreach is bringing Stephen and his entire family out to Las Vegas for the holiday weekend to recognize, honor and show appropriate appreciation to this man for his service to our country.  If you’re in town, I hope you’ll join us.

More importantly, I hope you all will remember heroes such as Sgt. Stephen Jackel this coming Memorial Day.