I honestly don’t know what gets into some people some time.

Seemingly rational people suddenly go cuckoo for Cocoa Puffs and decide it’d be fun to $#%& in my Wheaties.  Latest case in point…

On August 17 I conducted a campaign school in Carson City.  A former Carson City GOP chairman, Maurice White, attended.  I’m sure I’d met him before, but didn’t really remember him.

Still, I have a soft spot for ex-party chairmen and we shared some fun, good-natured back-and-forth.  Seemed like a really good guy.  Nice smile.  Nice ponytail.  I’m envious.

Maurice told me he was planning on running again for Carson City supervisor – he’s run twice before and lost both times – and wanted to learn how he could do better.

Spent seven hours with me and loved the class.  In fact, he wrote this testimonial afterwards (spelling and grammar errors in the original) …

“You will never be disappointed with Chck’s classe.  Chuck has good insight to human psyche as it relates to communication. the price of admission is well worth it.” 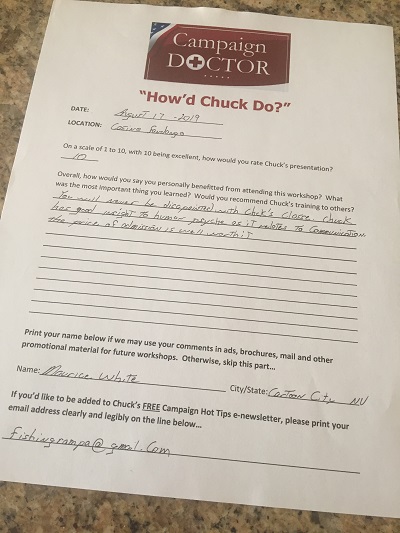 But then the race for Nevada GOP chairman between incumbent Michael McDonald, who Maurice supports, and Annie Black entered the mix.

Two days after he attended my campaign school, Maurice included the following in a Facebook post he put up attacking Annie…

“You are the one running a negative campaign agains fellow Republicans that is based on fake news Chuck Muth made up for you.”

I mean, considering the friendly conversations we’d had just two days earlier, I thought if Maurice had a problem he’d at least be man enough to come to me directly rather than come at me on someone else’s Facebook page

Emails were exchanged.  He kept nagging me about whether I was helping Annie – which, frankly, is no more his business than it would be if someone asked if I was helping HIM.

After a couple of days, he finally stopped the whining.

“If you’re not persuaded of ‘to make Nevada Red—bet on Black’, here is another reason:  vote for Annie, because you prefer voting for the winner.”

And Maurice threw a hissy fit.

“Really?” he replied with indignation to the group.  “Pithy slogans are not a reason to vote for anybody. How bad did she lose in her first effort when she didn’t raise money then either?”

Again, spelling and grammar in the original.

To which I replied…

“It appears Maurice slept through the 2016 Republican presidential primary.  Who won that again?  And what was President Trump’s ‘pithy’ slogan that Maurice says wasn’t a reason to vote for him?  Make America Great Again.  Yeah, that sure didn’t work, did it?

“From the Department of People in Glass Houses…

“Let’s revisit how Mr. White did in the PRIMARY for his OWN first campaign for Carson City supervisor in 2012. Correct me if I’m wrong, but I think he came in THIRD with just 17% of the vote. Total raised: $6,000.  Not exactly an electoral colossus.

“Maybe Maurice isn’t the best person to be taking campaign advice from?”

Well, of course, he had a cow over that and frothed back…

“I am not running for a Republican office so why attack me.  I have leveled no attack on anybody, I haven’t called any names.”

Well, because you threw the first punch, sport.  It’s called “counter-punching.”  Something our president is excellent at, by the way.

And as a reminder, this whole kerfuffle started when Maurice accused Annie of running her campaign for state chair “based on fake news Chuck Muth made up for you.”

I’d still like to know what “fake news” he was talking about, but…whatever.

Maurice went on to claim that “Muth’s remarks about my campaigns are not accurate” and proceeded to call me a “ne’er do well” and a “failed hired gun.”

Thank goodness he hasn’t called anyone any names!

“Funny how you didn’t say any of these things to me in person when you came to my candidate training school a couple weeks ago at the Fandango and asked for my help in your race next year.  And feel free to correct the record as it relates to what I wrote about your two past campaigns.  I got the info from the Secretary of State’s website.  Do they have the results wrong?”

Naturally, he refused to point to what I supposedly got wrong about his two losses.  What a surprise.  Instead he coughed up this…

“I did not ask for your help in my ‘next campaign.’”

In fact, he did so in writing in an email immediately after the end of the campaign school… 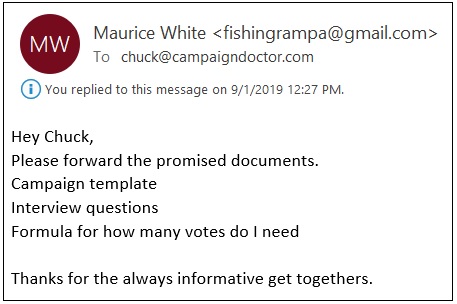 In case you can’t see the image for some reason, his request for help reads…

Hey Chuck,
Please forward the promised documents.
Campaign template
Interview questions
Formula for how many votes do I need
Thanks for the always informative get togethers.

Now, if I’m such a “ne’er do well” and a “failed hired gun” who’s peddling “fake news,” why was he asking for my help?

Better question: Why is he getting his nylons in a knot and throwing e-temper-tantrums over a party chair race?

Even better question: Why do these people insist on bringing knives to gunfights with me?