Welcome to Mini-Martial Law in Nevada 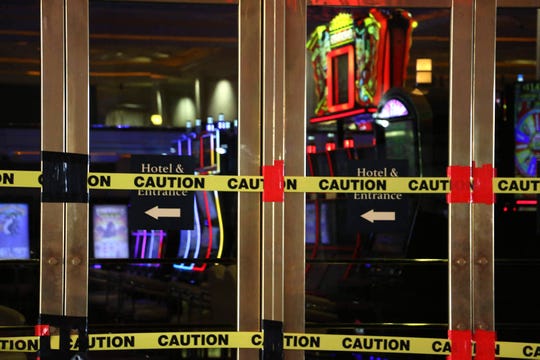 Not of the China Virus.

Of the Big Brother Virus.

Make no mistake.  Gov. Sisolak’s declaration locking down Nevada and shuttering “non-essential” businesses was a mini-declaration of martial law – but without the military (for now).

“Those who would give up essential Liberty, to purchase a little temporary Safety, deserve neither Liberty nor Safety.”

Sadly, few seem to care that ONE MAN decreed from upon high that “sleepovers” and “playdates” were hereby verboten statewide because “every social contact increases your risk of exposure.”

Yet day care centers were allowed to remain open.

No haircuts…but you can jam into the pews of a church.

You can’t get your nails done…but you can get the oil changed.

You can’t go to the gym…but you can go the dry cleaners.

You can keep building the Raiders’ stadium…but you can’t go to GameStop.

Indeed, the governor’s definition of “essential” businesses exempted from his order was left wide open for interpretation – with an ever-expanding list of loopholes you could drive a city bus loaded with China Virus carriers through.

Apparently, not all “social contacts” are created equal.

In addition, the roll-out of Gov. Sisolak’s mini-martial law was not only contradictory, but exceptionally and unnecessarily confusing.

Turns out his “order” wasn’t an “order” after all.  It was a request; an “advisory.”

Indeed, the governor’s statement Tuesday night was filled with “shoulds,” not “musts.”  For example…

It wasn’t until a full day later that we were told, as reported this morning by the Las Vegas Review-Journal, that the governor’s “advisory, for now, ultimately leaves the decision to close up to individual businesses.”

That was a critical piece of relevant and important information left out of the governor’s remarks Tuesday night.

In fact, he intentionally left the exact opposite impression…causing unnecessary panic in the minds of both workers and small business owners who were left scratching their heads.

Las Vegas Mayor Carolyn Goodman was the only major elected official in the state courageous enough to dare to stand up to Gov. Sisolak’s mini-martial law declaration…er, suggestion.

“Any full-out shut-down will cripple the state’s recovery, not only for now but for several years to come. … Please, governor, we need to be able to live our lives, support our families and, yes, keep Nevada strong.  But we can’t do that if we are continuously housebound, unable to work for such a lengthy time period.”

Goodman went on to urge the governor to shorten his closure order…er, suggestion.  After all, the governor said he made his decision after consulting with the White House – which has called for “15 Days to Slow the Spread,” not 30.

Goodman’s right.  And as the RJ reported this morning, the mayor’s position is a reasonable balance between safety and liberty…

“Goodman agreed that people must self-isolate before and during the onset of the virus and until the contagious period was over, and she said the city has adhered to guidelines issued by the state prior to nonessential business closures: reducing public gathering places by 50 percent of capacity; people keeping 6 feet of distance from another; and isolating when appropriate.

“But it has always been her intent for businesses to remain open even with the understanding that there may be certain restrictions. The issue ultimately whittles down to affording people the right to ‘make their own choices, create and follow their own destinies,’ she said, and that includes earning a living and providing for their families.”

“There is a vast gap between people washing their hands, avoiding crowds, shielding the old and using good judgment – and sweeping lockdowns and curfews.”

“The mayor of Las Vegas has been irresponsible from Day One. Now she is contradicting what the governor, who made a wrenching decision, did.”

“The most prominent elected official in Las Vegas is downplaying the coronavirus threat and implicitly criticizing the gov. What an embarrassing spectacle for the city. Her words are likely to get people sick and cause all kinds of other problems. It’s a carnival of ignorance.”

Ironically, less than 48 hours after the mini-martial law order…er, suggestion…was announced, the economic impact apparently reached up and bit the Little Blogger Who Couldn’t right in the arse.

From his newsletter today…

“Yesterday was a tough day for The Indy. We are going through what many businesses are: We have been devastated by the economic crisis brought on by the coronavirus. I had to tell my beloved staff I have to cut the budget in half, make substantial cuts across the board.”

Don’t you just hate when that happens?  Karma.

I’m one of them.  It IS an overreaction.

Countless families and small businesses are going to be financially devasted and may never recover.  Bankruptcies will inevitably sky-rocket, as will the ranks of the permanently unemployed and homeless.

Governor Sisolak is trying to have it both ways.

He can claim he “did something” – and will point to the inevitable end of the crisis as the spring weather heats up (by the way, where the hell is global warming when you need it?) to justify his actions.

But if the governor really thought his actions were absolutely necessary, he should have issued an Executive ORDER, not an “advisory.”

And he wouldn’t have allowed for so many contradictory exemptions, such as public bus transportation, construction, auto repairs, hardware stores, pet shops, laundromats, dry cleaners and day care centers.

Either the threat is real and draconian actions are necessary…or not.  You can’t have it both ways.

Unless, of course, you’re a politician.

*  In case you somehow haven’t seen that old clip from “Cheers” about a customer who got a job as a janitor at a biology lab, click here.  It’s hilarious…especially in light of the ongoing China Virus scare.

*  In the “old days” when we felt a scratchy throat might mean the flu was upon us, mom made us to gargle with warm salt water.  We hated it!  But the fact is, it seemed to work.

I was talking to Dr. Joe Bradley last night (candidate for Assembly District 36).  And he explained that the heated water and salt can kill flu germs in your throat before they make their way into your lungs.  Makes sense.

Now, I’m not saying that gargling with warm salt water throughout the day will keep you from getting the China Virus.  I’m no doctor.  But hey…it couldn’t hurt, right?

*  I checked Expedia on Sunday to see how hotel rates were holding up on the Strip in the midst of the China Virus scare before Gov. Sisolak’s shutdown order.

Most still had what one would consider normal rates.  But one resort was advertising just $19 per night!

Alas, an additional $42 per night “resort fee” was added.

If any economic good is to come out of this pandemic, I hope it includes the elimination of these scam fees and paid parking on the Strip.  Let’s make Las Vegas great again!

“Bernie Sanders (is) the closest thing we have in politics to the old man sitting on his porch yelling at the neighborhood kids to stay offa his lawn. He’s just grouchy.” – Rich Galen

“Some promising and cheap treatments for the COVID-19 epidemic are in development, but we see the same risk-averse bureaucrats who opposed Trump’s ‘right to try’ bill now holding up these promising treatments for the Wuhan virus. President Trump is correct to apply the ‘right to try’ philosophy to drugs that show promise in the fight against the Chinese coronavirus epidemic and bureaucrats in lab coats should get out of the way.” – ConservativeHQ

“Remember the ‘vaping disease epidemic’?  While an actual pandemic was getting underway, the whole of America’s public health apparatus, political machine, & news media was hyperventilating over a made-up problem.” – Elizabeth Nolan Brown