We Have Met the Enemy: The Nevada Assembly GOP Caucus 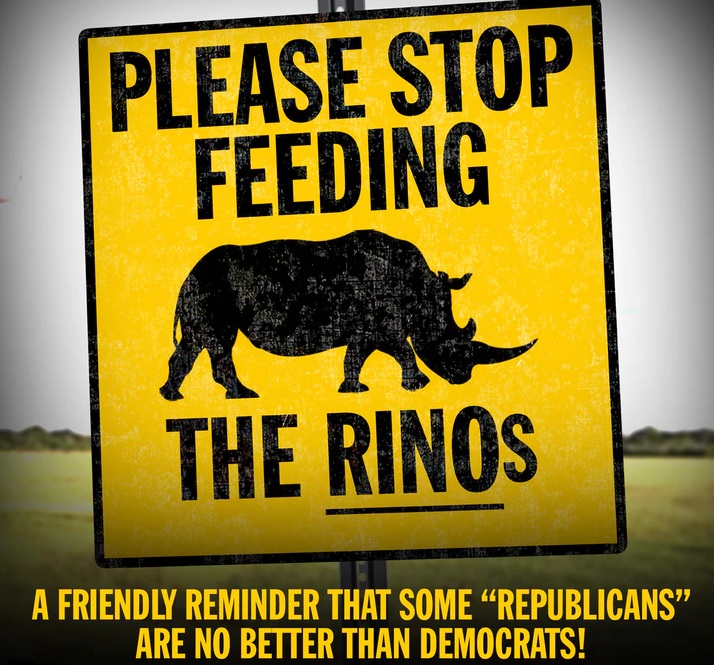 Believe it or not, the majority of Republicans in the Nevada Assembly Republican Caucus are as big a threat to limited-government and lower taxation as the Democrats.

Tax-hiking RINO Assemblyman John Hambrick – who, as Speaker of the Assembly, sold us out by leading the fight for the largest tax hike in Nevada history in 2015 – is, mercifully, termed out.  So his district will be an “open” seat next year.

And today the caucus endorsed – three months before the close of filing – a candidate in that race.  From their press release…

“The Assembly Republican Caucus is pleased to announce the endorsement of Heidi Kasama for Assembly District 2.  Heidi is a mother, a small business owner, and former president of the Nevada Realtors organization.”

But in response, Las Vegas Review-Journal columnist Victor Joecks pointed out in a tweet that the caucus left a teensy-tiny little detail out about Ms. Kasama’s background…

That she endorsed Democrat Susie Lee for Congress last year!

“Susie Lee is a common sense problem solver who can work in a bipartisan fashion to achieve real results for Nevada families,” said Heidi Kasama, president of the Nevada REALTORS®. “Nevada’s REALTORS®, homeowners, and aspiring homeowners can count on Susie to deliver results for middle-class families.”

Thanks to “Republicans” like Ms. Kasama, we have a Democrat in our 3rd Congressional District who’s leading this impeachment circus insanity and voted against President Trump’s middle-class tax cut.

In fact, here’s what Susie Q tweeted just this afternoon…

“Here are the facts:  The President abused his power for personal gain in the 2020 election.  He bribed a foreign ally to investigate a political rival, harming our nat’l security.  He obstructed Congress to coverup the truth.”

And a woman who endorsed this crap is who the Assembly Republican Caucus is endorsing?

Look, it’s one thing for the caucus to endorse its incumbent members for re-election.  I get that.  But why are they endorsing for open seats and seats not held by a Republican this far ahead of the filing?

We don’t even know who else might be interested in running – and obviously don’t yet know a whole lot about those who are.

I can tell you this much, though.  Based on her support for Susie Q last year, I’m pretty sure Ms. Kasama is a mushy-moderate, government-growing “Republican-in-Name-Only” (RINO) in the mold of caucus assistant leaders Tom Roberts and Jill Tolles.

You can bet she’s not a movement conservative, and I’ll all but guarantee she won’t sign the Taxpayer Protection Pledge.

Which, by the way, one of her GOP primary opponents – Jim Small – has already signed.

This Kasama endorsement piggy-backs on another outrageous early endorsement made by the caucus last month.

Assembly District 31 is the only assembly district in the state with a Republican majority and a Democrat incumbent.

The seat was previously held by conservative Republican Assemblywoman Jill Dickman who was mulling another run to get her seat back.

But the caucus knee-capped Dickman by endorsing an unknown and untested “newbie” – a guy named Jake Whiskerchin or something – even though they KNEW Dickman was still considering a run.

Whiskerchin is the hand-picked pet lapdog of Tolles, who’s had the absolutely WORST conservative voting record of any Republican in the Assembly for the last two sessions.

As a conservative, I subscribe to the Bill Buckley rule; that Republicans should support the most conservative candidate who can win.

I don’t know a lot about Kasama and Whiskerchin, but I do know this much…

Kasima is NOT the most conservative candidate who can win Assembly District 2.

And Whiskerchin is NOT the most conservative candidate who can win Assembly District 31.

Yet those are the two candidates the majority of the Assembly Republican Caucus are trying to shove down our throats.

The Assembly Republican Caucus is its own worst enemy.

“I look very much forward to debating whoever the lucky person is who stumbles across the finish line in the little watched Do Nothing Democrat Debates. My record is so good on the Economy and all else, including debating, that perhaps I would consider more than 3 debates.

“The problem is that the so-called Commission on Presidential Debates is stacked with Trump Haters & Never Trumpers. 3 years ago they were forced to publicly apologize for modulating my microphone in the first debate against Crooked Hillary.

“As President, the debates are up to me, and there are many options, including doing them directly & avoiding the nasty politics of this very biased Commission. I will make a decision at an appropriate time but in the meantime, the Commission on Presidential Debates is NOT authorized to speak for me (or R’s)!”