Walgreens’ pay-to-pee policy a crappy way to do business 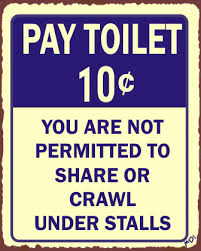 I’ve never suffered fools gladly and have near-zero tolerance for blatant stupidity.  You’d think, being in politics with the likes of former Assemblyman Mark Surewould, that I’d be used to it by now.  But I’m not.  Here’s the deal…

I had to make a marketing presentation in San Diego last week.  The day before was my first-born’s 14th birthday and Kristen wanted to go to this place in downtown Los Angeles called “The Last Bookstore,” which is supposed to be just the coolest used bookstore ever (it is).  So I took her along.

We laid up in West Hollywood (because I can’t afford Beverly Hills!), walked up to Sunset Blvd., had a great birthday dinner at Nonna’s of Italy – after taking the requisite photo in front of the Rainbow Bar & Grill (“where the possessed go to mingle” for you Sam Kinnison fans) – and then drove over to the bookstore after (in any normal city) rush hour was over.

We found the bookstore easily enough, only to find it didn’t have a restroom.  And, well, girls being girls, one was required (they never seem to “go” before we go).  However, the helpful clerk at the front desk advised that the Walgreens a block up the street did.

So off we went to take care of business.  Only…

The restroom was a pay toilet.  Not the kind of pay toilet of old where you had to scramble around looking for dimes or quarters.  No, to gain access here, the store manager informed us, we had to buy something.

But I didn’t need anything. Nor did I want anything.  My daughter just had to heed nature’s call.

Tough luck, advised the manager.  If you don’t show me a receipt showing you bought something, I’m not unlocking the door.

As there was now steam coming out of my ears, a bottle of water for a buck seemed an appropriate purchase.  But here’s the thing…

I understand that Walgreens is a drug store and not a public restroom.  And I understand they don’t want downtown homeless bums making themselves at home in their johns rather than taking care of business in the alley like they usually do.  However…

I’ve already bought a ton of stuff from Walgreens, especially after starting a separate boycott of CVS a few months back in response to their aggressive support for ObamaCare.  And in all of my other visits and all of my other purchases at Walgreens – for which I had plenty of receipts at home – I’ve never once used any of their bathrooms.

So if pay-to-pee is the name of the game, they owe ME.

That said, it’s their store and they can set whatever restroom policy they choose.  On the other hand – and this is the great thing about the free market (something I wish our public schools were subject to) – I can protest such a stupid, anti-customer policy by shopping elsewhere.

Yep, they got me.

I had no choice but to spend that $1 on a bottle of water I didn’t want.  But that’s the last $1 Walgreens will get from me.  Because of their penny-wise-pound-foolish policy, Walgreens will now lose the hundreds, if not thousands of dollars I would have otherwise spent with them in the months and years to come.

For want of a nail…

UPDATE: On April 3, 2013 I received that following email…

My name is Tri Leu and I am the District Manager for the stores in Los Angeles. I am writing to you regarding  the terrible experience that you had in one of my stores. I apologize that you were forced to make a purchase just to use our restroom. Since this is not a Walgreens or Market policy, I am quite shocked and embarrassed.

I have spoken to the Store Manager and carefully explained to him why it was a bad idea to continue with this policy. He understands his mistake and quickly stopped the practice.

I will also review this with all of my Store Managers to make sure that this has not spread to other stores.

Thank you and be Well,