The Las Vegas City Council, without public support, has voted 4-3 to use tens of millions of dollars to build a brand-spanking new soccer stadium in downtown Las Vegas.

For some reason, I recalled this morning what happened at the last major soccer event held in the Las Vegas area.  It was a riot – literally – at a match held at the Sam Boyd Silver Bowl.  Which, by the way, is a perfectly fine venue for soccer matches and has the additional virtue of, you know, already being built!

Anyway, here’s the opening paragraph of the Las Vegas Review-Journal story from July 3, 2013…

“Pandemonium erupted as up to 400 rival soccer fans clashed during El Super Clasico pregame festivities Wednesday night, drawing more than 120 police officers to the scene and sending at least six people to the hospital.  Violence flared up again when the game ended about 10 p.m. when angry fans rushed the field, throwing bottles and cans.”

And since a picture’s worth a thousand words, here’s a photo from the melee, courtesy of the RJ… 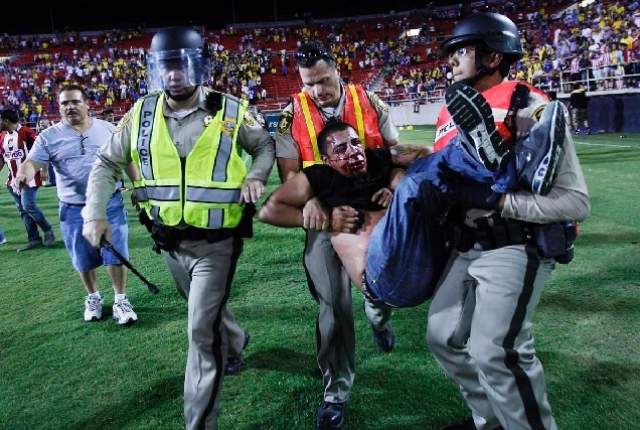 Las Vegas taxpayers should fund THIS instead of neighborhood parks and playgrounds?  I don’t think so.

By the way, City Councilman Bob Beers is leading an effort to block the stadium gigaway via a ballot initiative and needs help gathering signatures before Tuesday’s deadline.  You can sign up to volunteer by clicking here