(Chuck Muth) – Although there are signs the “Sweet 16” tournament for the Republican nomination for governor in the June GOP primary is tightening up a smidge, this is still Joe Lombardo’s race to lose.

As of the last financial reporting period, ending March 31, Lombardo had almost $3 million cash on hand – plus another $1 million-plus from a Lombardo-affiliated PAC – and continues to lead in polls.

And while I always have suspicions about the validity and accuracy of polls, when they get reported and casual voters read them, it makes a difference in voter behavior.  Many people have a natural desire to be associated with the expected winner.

As for the rest of the field…

Ten of the candidates don’t meet even a minimal level of viability – in either funding or polling – to have their campaigns taken seriously at this point.  Not saying they’re bad people, or even bad conservatives.  Just bad campaigns.

Dean Heller still has residual name ID from being a U.S. senator – though it’s most often negatively associated with him being a “Never Trumper,” so not much help in a GOP primary.  And he reports having less than $250,000 cash on hand.  Stick a fork in him; he’s done.

Fred Simon reports lending his campaign $1.25 million, with $1.25 million cash on hand.  So not exactly a groundswell of grassroots donor support.  And despite spending a ton so far on radio ads – which, let’s just say, are not great – there’s no discernable groundswell of widespread voter support either.

Mr. Simon – who, by all accounts, is a solid conservative – would have been better advised to run for a lower office instead of trying to start right off at the top here in Nevada.

That leaves John Lee, Joey Gilbert and Guy Nohra as the three candidates vying to be the anti-Lombardo who could possibly give him a run for his money over the next six weeks.

Nohra is a newcomer to politics and is running – like Glenn Youngkin last year in Virginia – as an outsider.  He reports lending his campaign $500,000 and has $700,000 cash on hand.  However, there have been reports since the close of the reporting period that he’s reserved $2 million worth of TV time.

If true, money’s not Nohra’s problem.  But it’s gonna be tough to break through this crowded field and emerge as THE alternative to Lombardo who can unite the warring clans.  Will probably need some major development or shake-up in the race over the next month to get any traction before mail-in ballots are dropped.

It’s not over yet, but the clock is ticking.  Nohra needs to catch fire…and soon.

Gilbert continues to benefit from the most vocal, energized and active supporters among conservatives of any campaign I’m seeing this cycle.  However, he reports having just $41,000 cash on hand for the final stretch.  Without a major infusion of dough, it’s gonna be awful tough to catch Lombardo.

Lee has name ID after 25 years in the political world and a solid record of achievement as mayor of North Las Vegas.  However, his party-switch last year – perceived by many as political opportunism – still raises deep suspicions among hard-core GOP primary voters.

Unfortunately for Lee, his campaign has not yet effectively turned that lemon into lemonade.  Simply pointing out that Reagan and Trump were former Democrats ain’t enough.

And despite reporting a $500,000 loan to his campaign, Lee also reports just $169,000 cash on hand.  However, it’s also believed he’s willing and able to personally pump a lot more into his campaign as we get to the end game.

The real problem is, as long as these three – along with the others in the race – are splitting up the anti-Lombardo vote, it’s likely none of them will be able to catch him.  Lombardo haters don’t have to like it, but that’s the reality.

*  For the record, I don’t think I’ve seen a single political ad on TV over the last four months.  When I do watch TV at night, it’s usually commercial-free streaming programs.  And when I AM watching a program with commercials, I usually channel surf the minute the ads start – or get up to grab some chips and another beer.  Campaigns that are still investing a ton on TV ads need to really look at whether they’re getting a sufficient bang for their buck.

*  On March 2, Philadelphia ended its mask mandate.  On April 18, it reinstated it.  Four days later, it dropped it again because…you know…”science.”

* The Nevada Hospital Association reported this week a “record low” in statewide hospitalization numbers.  So why, oh why, hasn’t Gov. Steve Sisolak pulled the plug on his “Declaration of Emergency”?  There is no emergency.  And why aren’t the GOP candidates doing and saying more about ending this dictatorial one-man-rule?

* Kyle Moos is charged with stabbing a security guard, resisting arrest and punching a police K-9 dog.  As is typical in these days of soft-on-crime prosecutors and judges, we learn this thug was already facing charges of assault with a deadly weapon and resisting arrest, yet was allowed back out on the street on “house arrest.”  How in the hell does someone who assaulted a police officer with a gun get out on “house arrest”?  We need some new judges! 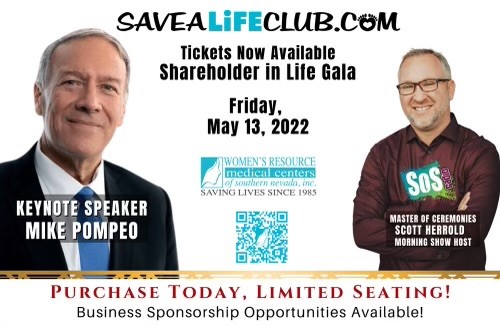 Laughter is the Best Medicine

Thanks to Muth’s Truths reader G. Bowers for lightening up the day’s mood with this one…

A woman, cranky because her husband was late coming home again, decided to leave a note, saying: “I’ve had enough and have left you.  Don’t bother coming after me.”

Then she hid under the bed to see his reaction.

After a short while the husband comes home and she could hear him in the kitchen before he comes into the bedroom. She could see him walk towards the dresser and pick up the note…

After a few minutes he wrote something on it before picking up the phone and calling someone: “She’s finally gone.  Yeah, I know, about bloody time.  I’m coming to see you.  Put on that sexy French nightie. I love you.  Can’t wait to see you.  We’ll do all the naughty things you like.”

He hung up, grabbed his keys and left.

She heard the car drive off as she came out from under the bed. Seething with rage and with tears in her eyes she grabbed the note to see what he wrote…

“I can see your feet. We’re outta bread.  Be back in five minutes.”

“If our Twitter bid succeeds, we will defeat the spam bots or die trying!” – Elon Musk