Turns Out, Carolyn Goodman was RIGHT! 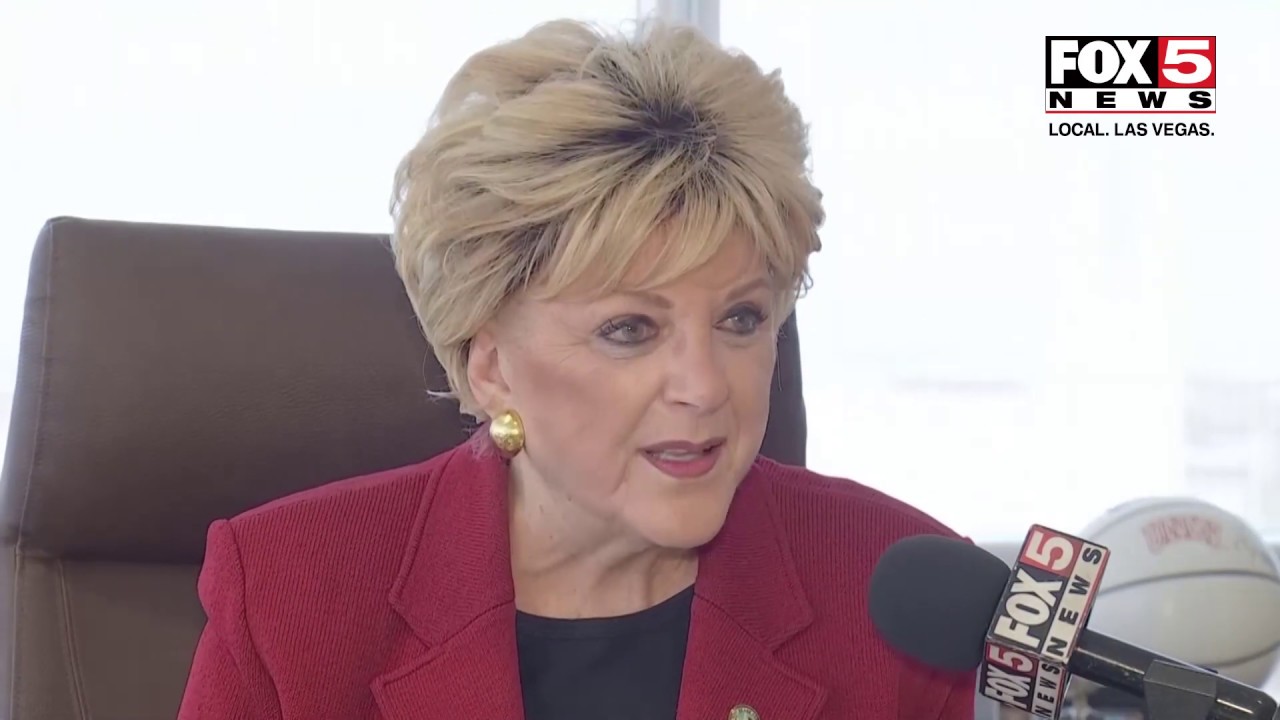 That was the White House guidance back in March; not an order to shut down the nation.  The shutdowns and “house arrest” for healthy citizens were ordered by some of the nation’s governors, including Nevada Gov. Steve Sisolak.

It didn’t take Captain Obvious to see economic devastation that was sure to follow.  But as of today, Gov. Sisolak continues to choke off the economic lifeblood of our state: Gaming.  Even in rural Nevada counties that have yet to report even a single case, let alone a death.

And the only rational voice of common sense and reason by a Nevada elected official in objecting to the governor’s emotional, irrational, contradictory and discriminatory over-reaction has been Las Vegas Mayor Carolyn Goodman.

Mayor Goodman, from the start, has been resisting some of Gov. Sisolak’s more draconian and non-sensical decrees.  She has championed SAFELY and responsibly reopening the Las Vegas economy for weeks, only to have the governor drop the hammer on her.

At the same time, the governor’s accomplices/apologists in the media – hello, fake news CNN! – have been in overdrive trying to undermine the Mayor’s legitimate difference of opinion.

“There’s been no surer way to end up on the media’s blacklist amid the coronavirus pandemic,” noted the Washington Examiner this week, “than to say the words ‘reopen’ and ‘economy.’”

One media stooge in particular – local blogger and unofficial Sisolak press secretary Jon Ralston – has been screeching, whining, kvetching, belly-aching and blustering hysterically ever since Mayor Goodman rightfully observed on April 15 that “this shutdown has become one of total insanity.”

Indeed, in an April 21st interview on liberal MSDNC, Ralston dismissively referred to the elected Mayor of the Greatest City in America as an “ankle-biter,” while another guest appearing with him, Democrat mega-donor and time-share kingpin Steven “Clueless” Cloobeck, had a veritable meltdown on-camera.

“Once and for all, enough, Mayor!” the unhinged, red-faced clueless one bellowed.  “You have nothing to do with the Strip! It’s utter bullshit. Utter bullshit!”

I wonder if he kisses the governor’s arse with that mouth?

Of course, Cloobeck’s rant is what was utter bulls…well, you know.  Mayor Goodman has always talked about re-opening LAS VEGAS.  She has NEVER said she represents the world-famous Las Vegas Strip – even though the Las Vegas Strip is named after, um, Las Vegas.

And don’t think it was some coincidence that Ralston and Cloobeck ended up tag-teaming Mayor Goodman on the same show.

Clueless Cloobeck entertained the hilarious notion of running for governor himself in 2018 before chickening out.  He then donated $15,000 to Sisolak’s campaign, and another $50,000 to the governor’s inaugural ball.

In addition, the Las Vegas Review-Journal reported on Wednesday that he’s donated “more than $492,000 to the Nevada Democratic Party” over the last two years, as well as…get this…$800,000 to Ralston’s liberal blog!

Birds of a goofball feather…

It should also come as no surprise that Ralston – who heretofore hated the idea of recalls for elected officials – now supports recalling Mayor Goodman.  Truly, the Hypocrite King.

Nor will it come as any surprise that, according to a Las Vegas Review-Journal story in today’s paper, Clueless Cloobeck supports the recall AND his support “is expected to include cash to pay workers to gather signatures.”

These two are political henchmen and attack dogs more interested in taking down a Sisolak critic than getting businesses back open and people back to work.  They’re shameless and shameful.

But one can understand why they have their tighty-whities in a knot.

The longer the #SisolakShutdown continues, the more Mayor Goodman is being proved RIGHT in her position that the time to begin re-opening, in order to save businesses and allow people to go back to work, was weeks ago.

As she said in a statement issued on May 6…

“I recognize there is fear about opening too soon, but the question many are asking is…when is too soon too late?”

Well, as we learned today from Heidi Knapp Rinella of the Las Vegas Review-Journal…it’s already too late for some.

“At least three local restaurants won’t be part of Phase One, Phase Two or any other phase of the state’s reopening plan,” Rinella reported, “because they’re closing permanently.  A fourth restaurant is also not likely to reopen.”

Hey, by the way, remember when the media jackals were hammering Republican governors for “opening too soon” two weeks ago?  How’s that worked out?  Well…

“The first stages of reopening haven’t produced a surge in coronavirus cases in most states,” reported Sam Baker of Axios.com on Wednesday.  “Some of the states that skeptics were most worried about, including Florida and Georgia, haven’t seen the rise in total cases that some experts feared.  Florida’s new cases have actually declined by 14% compared to the previous week, and Georgia’s fell by 12%.  Nevada leads the pack with a 44% reduction.”

You mean you didn’t know that Nevada leads the pack with a 44% reduction in the number of new cases?

And yet we’re still on house arrest.  And our casinos are still closed.

You know, when Mayor Goodman called on him to do so.

Indeed, nothing dramatic has changed since the middle of April when the mayor referred to the ongoing #SisolakShutdown as “total insanity.”  Except…

“The politics of government shutting down the economy is changing,” noted Grover Norquist of Americans for Tax Reform on Wednesday.  “Today’s polling numbers:  Sixty percent (60%) of voters believe every business that establishes safe social distancing protocols should be allowed to open. Just 26% oppose the idea.”

Yet Gov. Sisolak continues to fret and fiddle and hold Nevada hostage.

He refuses to allow the state’s casinos to re-open even as casinos in the states of South Dakota, Oklahoma, Washington, Arizona and even California are getting back to business.

So why can’t, as Mayor Goodman has been calling for for weeks now, Nevada’s casinos begin the process of re-opening?  Or, at the very least, the neighborhood casinos, bars and taverns? Especially in rural Nevada.

What is the governor waiting for?  A cure?  Good luck with that.  We’ll be shut until Christmas!  Or longer.

“It seems likely we’ll eventually conclude the full-scale shutdowns were an overreaction,” wrote columnist Victor Joecks of the Las Vegas Review-Journal yesterday.  “I still (think) @GovSisolak’s initial shutdown decision was a reasonable step to take in confronting an unknown virus. But keeping NV closed for a month after we flattened the curve wasn’t.”

Indeed.  Clearly the “curve” here has been flattened.  Yet the governor continues to flatten our economy.

Carolyn Goodman has been pretty much right all along.

Gov. Sisolak has been pretty much wrong all along.

I’d suggest the two swap jobs…but I like Las Vegas too much to wish that fate upon them.

The Nye County GOP will be hosting a series of virtual debates on May 22 and 23 featuring candidates for the 4th Congressional District, Assembly District 36 and the three county commission races.

One of the Assembly candidates, Joe Bradley, has advised Nye GOP chief Joe Burdzinski that he’s refusing to participate – despite having openly challenged his opponent, Assemblyman Greg Hafen, to debate for months.

“The lockdown crowd is going to destroy the country. I’m not kidding. They’re misleading you into thinking the virus is a single variable problem. IT ISN’T. Hospitals are going bankrupt, ppl are avoiding doctors, the food supply is strained, & we’re on the cusp of mass poverty.” – Dan Bongino

“We went from ‘flattening the curve’ to ‘indefinite house arrest’ with no real debate or discussion. These measures should be voted on by elected representatives of the people. We’re supposed to be living in a republic.” – Noah Pollak