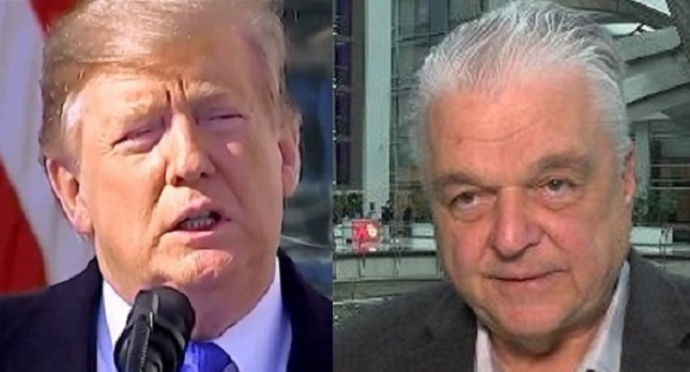 When President Trump suggested that anti-malaria drugs hydroxychloroquine and chloroquine *might* be effective in treating the Wuhan virus, the media and Trump-hating Democrats scoffed.

Including Nevada Gov. Steve Sisolak who banned doctors from prescribing it.

They accused Trump of “raising false hopes in the American public.”  Blamed him when an Arizona man died after eating fish tank cleaner rather than getting the medication from a doctor.

Hell, MSDNC’s Chuck Todd on Sunday went so far as to suggest the President had “blood on his hands.”

Here’s exactly what the President said on March 22…

“There’s been some tremendous signs that this could work. Now, again, you know, some doctors think it should go for years in testing. But, you know, this has been something that’s been around for many years. It’s been phenomenal – a strong, powerful drug for malaria. But we think it might work on this, based on evidence – based on very strong evidence. We’re going to see. We’re going to know on – you know, sometime after Tuesday.”

Well, on Saturday we saw France sanction use of the drugs after “78 out of 80 patients treated with chloroquine recovered within five days.”  And on Sunday night we saw the FDA issue “an emergency use authorization for hydroxychloroquine and chloroquine.”

If we’re not careful, more people are going to die from Trump Derangement Syndrome (TDS) than the Wuhan virus.

And all the while it’s been CLEAR the president really, really, really wants to allow Americans to get back to work as soon as safely possible.

“I want our life back again,” the President said in the Rose Garden yesterday.

So when he extended the “15 Days to Flatten the Spread” advisory until the end of April, people accepted that the situation was still serious enough to warrant the extension.  They fully understand and accept that he’s trying to make sure the cure isn’t worse than the disease.

Nevada Gov. Steve Sisolak, by comparison, has been a leadership disaster.

He’s done Facebook briefings.  Rarely has taken questions from the media.  And only if pre-screened and read out loud by a staffer.  No follow-up.

And the sound quality and choreography has been just awful.  The perception conveyed is that this is amateur hour.  Not exactly a confidence-builder.

It also seems that every briefing includes a clarification of something contradictory he said in a previous briefing – including constant changes as to what is and isn’t an “essential” business – leaving the public confused, fearful, unnecessarily stressed and in many cases…angry.

As political commentator Orrin Johnson wrote a couple days ago…

“Governor Sisolak’s most significant handicap is his inability to effectively communicate what he is doing and why. His habit of announcing first and providing regulations later is a bad one, and makes what are defensible policies into suspicious and ominous sounding headlines around the country. It undermines our ability to trust that he’s got a plan, knows what he’s doing, and has the situation in Nevada under control.”

The governor’s also told us he’s relying on the advice of a medical expert that the Washington Times reported isn’t even licensed to practice medicine in the U.S.  He’s also appointed an unelected Corona-Czar who’s known throughout the gaming community as “The Lord of Layoffs.”

In addition, Gov. Sisolak has also constantly deflected blame; criticizing the federal government for his own administration’s failure to anticipate and react appropriately to the situation – including falsely accusing the President of saying “you guys go out and take care of yourself.”

That’s NOT what the President said, and Sisolak knows it.

So while a majority of Americans trust President Trump when he says the health protocols need to be extended until the end of April, a large number of Nevadans wouldn’t trust Gov. Sisolak if he said you should take Ex-Lax for constipation.

It’s easy to sell fear. But it takes a real leader to sell confidence and hope.  Sorry, but we don’t have one in Nevada.

Gov. Sisolak said: “Every social contact increases your risk of exposure.  The bigger the group, the higher your risk.”

As such, he ordered a ban on people gathering in groups of ten or more, even in parks and playgrounds and their own homes.  Yet he specifically EXEMPTED the homeless from his order.

Two days ago it was announced that they were going to start gathering up to 500 homeless people in a make-shift overnight camp at Cashman Field since the virus has now reached the homeless population – a population not exactly known for its hygiene.

Without doubt, the Wu-Flu is now bound to spread quickly and widely among the homeless – if it hasn’t already.

So if every social contact increases your risk of exposure – and the bigger the group, the higher the risk – shouldn’t they be quarantined instead of exempted?

And shouldn’t there also be a public health ban on pan-handling, especially since law enforcement is now going around shutting down small businesses, even those taking safety precautions?

– State of emergency w/o time limit

– Spreading fake news + rumors: up to 5 yrs in prison

– Leaving quarantine: up to 8 yrs in prison

* New York Gov. Andrew Cuomo said yesterday that “patient zero” – the coronavirus patient who is believed to have brought the virus to New York – “who was very sick for a very long time, he has actually gone home.”  He also said the number of reported cases is not “multiplying nearly as quickly as they were last week.”  Why is that not the headline of stories today?

* According to the latest census data for this year, there are 3,139,658 people living in Nevada.  According to yesterday’s figures from the Nevada Department of Health, there are 996 people with the WuFlu.  That means almost the entire state of Nevada has been shut down even though 3,138,662 people have NOT tested positive.  Seems like an over-reaction to me.

* Here’s an inconvenient truth in the midst of media-inspired fear and panic: “In most cases, the new coronavirus causes only mild to moderate symptoms, such as a cough and fever, and most patients will recover fully within about two weeks without needing special treatment, according to the World Health Organization.”

*  On Monday, Gov. Sisolak announced that he was ordering a moratorium on evictions and late fees for renters.  However, tenants will still have to make arrangements with landlords to pay the rent once the Sisolak Shutdown ends.  But why should they have to pay rent when it’s Sisolak who has prohibited them from working? Sounds like a government “taking” to me.  Paging Kermit Waters!

* According to a report in Monday’s Las Vegas Review-Journal, 1/3 of Clark County’s government employees “are not currently working” – yet they “are continuing to be paid normal salary and benefits.”  As over 100,000 (and counting) private sector workers are now filing for unemployment, isn’t this…wrong?

* Gov. Sisolak has banned marijuana dispensaries from offering curbside service that other businesses are allowed to provide.  Instead, dispensaries are being forced to provide delivery service.  Which means the dispensaries are hiring a bunch of new drivers.  But those drivers are forced to pay a couple hundred dollars to get a government “work card.”  Under the circumstances, shouldn’t Sisolak at least be waiving those fees?

* Road construction in Nevada continues unabated, though NDOT (Nevada Department of Transportation) assures that public safety protocols – including not congregating in groups of ten or more and social distancing – are being followed.  So why can’t private businesses that follow the same protocols be allowed to reopen?

* Sticking with that topic, the President continues to hold daily press briefings with reporters spread out in the audience at least six feet apart.  And the House passed the latest stimulus bill with congress-critters spread out in the chamber.  So why can’t, say, churches do the same if they spread out congregants and take other safety precautions?

* Why are open-air parks and playgrounds closed but busses – with people crammed inside with no fresh air – still operating?

* If we can take steps to “flatten the curve” when it comes to the Wuhan virus, why can’t we take common-sense steps to flatten the economic devastation by allowing more businesses that take precautions to reopen?

Many small businesses are confused about the Small Business Administration (SBA) loan program that’s been established to help weather the WuFlu economic storm.

Click here for an explainer from Sen. Marco Rubio’s office that might help you clear some of the fog.

“Some in our media can’t contain their glee & delight in reporting that the U.S. has more #CoronaVirus cases than #China.  Beyond being grotesque, it’s bad journalism.  We have NO IDEA how many cases China really has but no doubt its significantly more than what they admit to.” – U.S. Sen. Marco Rubio