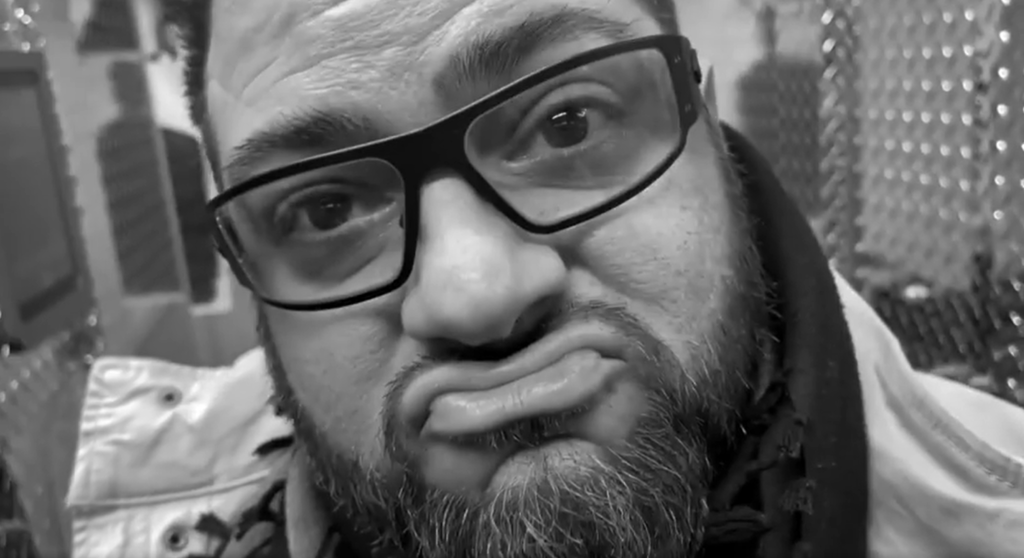 They should have listened.  From 8 News Now this morning…

“Racist comments made at a conservative political fundraiser are sparking outrage. Several Republican politicians attended the event including Assemblyman Tom Roberts and North Las Vegas Mayor John Lee. Roberts is running for Clark County sheriff. Lee is running for governor. … Lee and Roberts both appear in videos taken at the event.”

A report by NewsOne added…

“(W)hen a firearm instructor in Nevada got on stage during a recent conceal carry weapon (CCW) event and decided to do his version of the ‘white people are this way while Black people are this other way’ jokes that most Black comedians stopped doing in the late ’90s, his bit was stale, dated, completely unclever and completely racist. He probably thought it was OK because he was also making fun of white people, but nah – the racism and Black resentment were clear in his presentation.”

So what “racist comments” did Ka-Leaky-Leaky make during his training presentation?

Well, he put up a slide titled “Firearm Safety for Black People” which included the following… 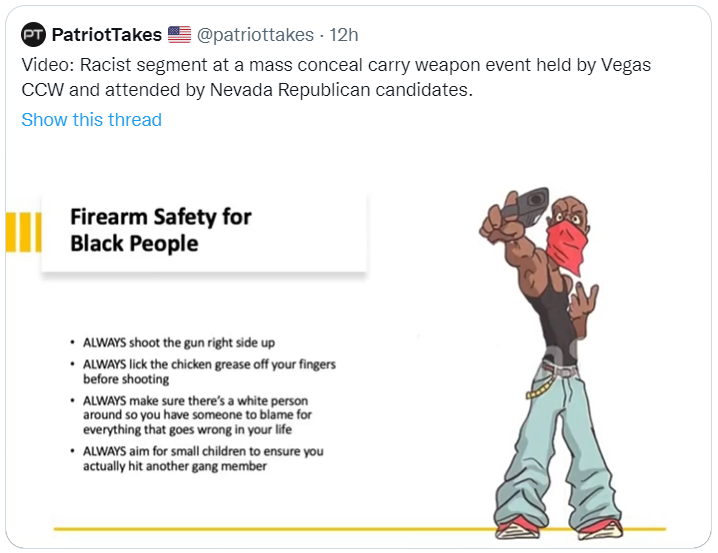 In response to the well-deserved, widespread blowback, this blowhard said, “Look, I think racism’s funny.”

Yeah, um…Dave Chappelle he’s not. And such wonderful PR for Republicans.  Thanks, Knee-High.

Ka-Leaky-Leaky also used the event to endorse Roberts for Clark County sheriff – which is absurd for anyone calling themselves a “conservative,” as Knee-High does.

Roberts is the poster child for RINOs (Republicans in Name Only).  He chalked up the second-worst conservative voting record in the 2021 session per the Nevada Policy Research Institute’s ratings (61.06%) and regularly campaigns for…Democrats. 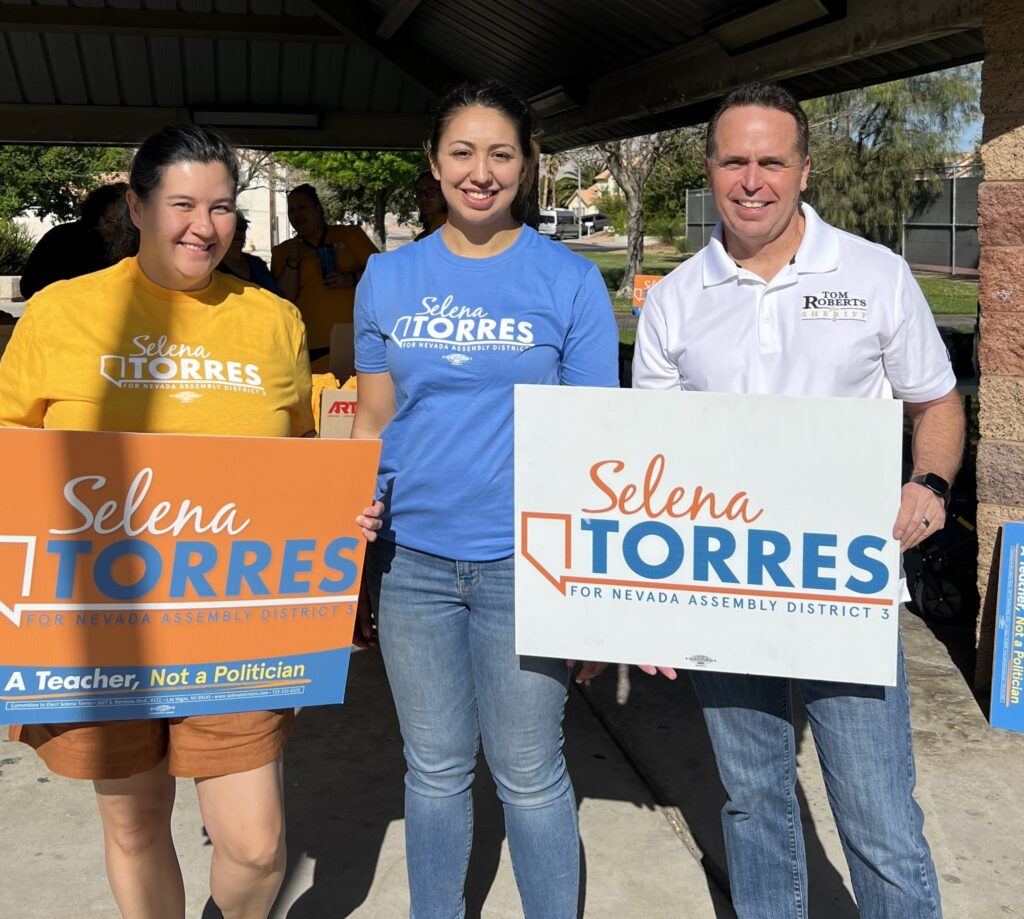 “I understand why this POS (Knee-High) needs to be associated with them (GOP candidates); it gives him an air of credibility he otherwise wouldn’t have.  But why in the world would they associate with HIM?”

It’s even harder to understand today.

One last thing:  I also found it interesting that this jackass would conduct a gun training program in a “gun-free zone.”  It was held at a Clark County library where attendees and Ka-Leaky-Leaky were prohibited from carrying their weapons on the premises.

Yeah, that makes perfect sense.  What a clown show.

* Don Tatro was appointed last year to fill the seat of former RINO State Sen. Ben Kieckhefer, who accepted an appointment in Gov. Steve Sisolak’s administration, after declaring he would not run for the seat.  Then, like a typical politician, broke his word and decided to run for the seat after all.  That alone is a disqualification in my book.  If your word’s no good…

* Great to catch up with former First Lady Dema Guinn and former Nevada GOP Chair Amy Tarkanian when I spoke at the Mt. Rose Republican Women’s dinner two weeks ago.  What a great crowd.  What a great time.  Thank you for having me! 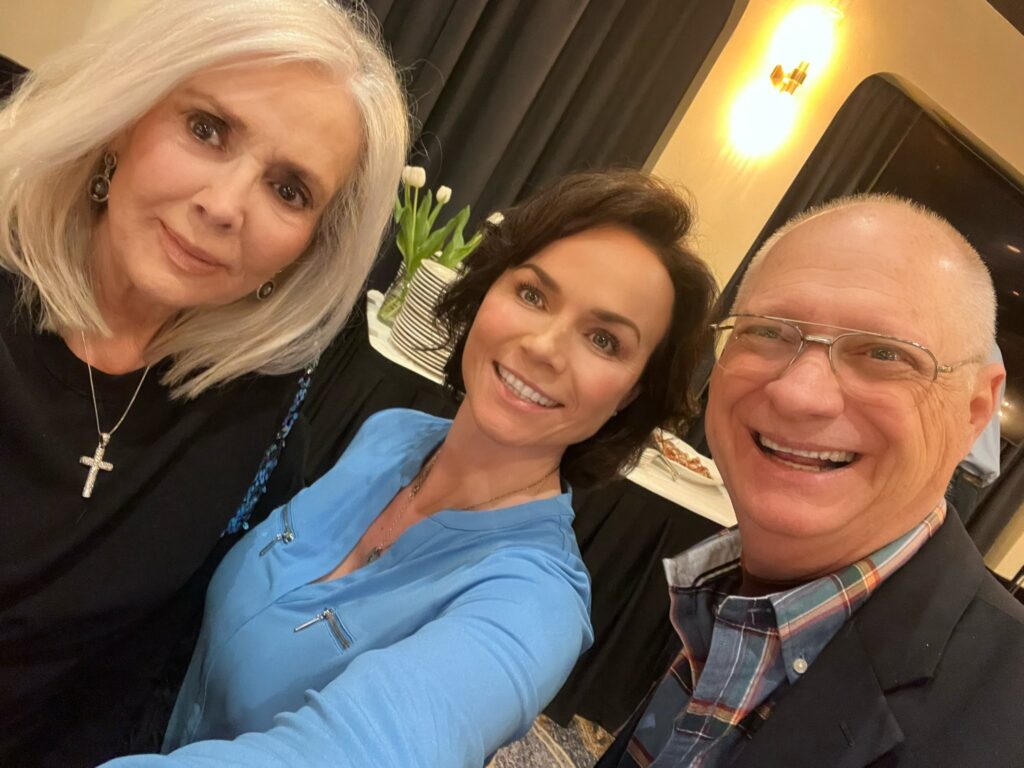 * Prior to my remarks at the MRRW dinner, Assembly District 26 (Washoe) candidate Jay Dixon spoke and proudly declared that he will NOT sign the Taxpayer Protection Pledge promising Nevadans that he will “oppose and vote against any and all efforts to increase taxes.” While I don’t know who I will support in that race, at least I now know who I WON’T be supporting.

The CDC has lowered the risk level for cruise travel to “moderate” (Level 2).  As such, the government no longer requires a vaccine passport; however, Carnival has not yet removed the requirement.  Still hoping it does so long before our re-scheduled ConservCruise this fall.

The dates are November 12-19, 2022.  That’ll be just four days after Republicans take back Congress!

“We must (endorse) pre-primaries, pick the best people and support them, NOT wait until the primaries are over. This is so foolish. Why back someone who has no chance or why back someone who has continued to sell us out? Just because they have an ‘R’ next to their name? Look where that’s got us.” – Robert Beadles, Reno, NV