The War Against the Tax Pledge 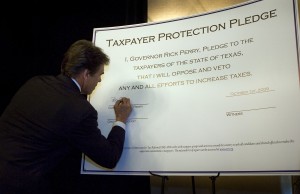 Nothing strikes fear into the political left and mushy moderates the way the 25-year-old Taxpayer Protection Pledge does. And the fact that the Pledge has been signed by enough House Republicans to block any “compromise” or “grand bargain” on the debt ceiling hike which includes raising taxes has them coming unglued.

Secondly, as former moderate Nevada state Sen. Bill Raggio loves to say, “compromise” isn’t a four-letter word. Then again, neither is “no.” And there’s absolutely nothing wrong with saying no when saying no is the correct thing to say – like telling a spoiled kid he can’t have ice cream before dinner.

There’s also nothing wrong with compromise if one doesn’t compromise on principle and the compromise is a fair win-win for both sides. Alas, compromise in the minds of Democrats almost always means they get the gold mine and Republicans get the shaft.

The 2011 budget compromise consisted of Nevada GOP legislators voting for a $600 million tax hike and the Democrats giving up….well, virtually nothing of real substance.

But Republicans DID get a “concession” from the D’s that if a crappy teacher is evaluated as crappy two years in a row, that teacher gets another year of double-secret probation and an opportunity to miseducate a third year’s worth of students before possibly, some day, in the remote distant future, getting canned.

But let’s get back to the attacks on the Tax Pledge itself by the left and faux conservatives who have become content with having a few table scraps added to their gruel.

New York Times columnist David Brooks. Brooks is no conservative, but passes for one as far as the far-, far-left NYT is concerned. He and David Gergen are the Republican moderates that liberals love to pass off as conservatives in their ongoing effort to paint conservatives as right-wing nuts.

Indeed, Brooks had an anti-Tax Pledge column out last week in which he maintains that Republicans in Congress who refuse to go along with tax hikes in debt ceiling negotiations means the GOP “may no longer be a normal party” because “it has been infected by a faction that is more of a psychological protest than a practical, governing alternative.”

He is, of course, referring to the tea party movement in general and Grover Norquist, father of the Taxpayer Protection Pledge, in particular without actually having the intellectual honesty to name names.

Hmm, it seems some people just can’t take no for an answer.

Conservatives know that in these “grand compromises,” the tax hikes are always implemented with a vengeance while the serious spending cuts never seem to fully materialize. And maybe, just maybe, Republicans in the House, collectively, have come to the conclusion that they simply won’t be fooled again.

Yet according to Brooks, these battle-hardened, hard-line Republicans aren’t principled, limited-government fiscal conservatives. Instead, he says “The members of this movement have no sense of moral decency.”

The immorality here is an out-of-control federal government that is trillions of dollars in debt – now estimated at $534,000 per U.S. household – not because taxes are too low but because spending is too high. The immorality here is passing this crushing debt onto the next generation of Americans who have no say in the matter.

But the real immorality here is anyone trying to claim that David Brooks is a conservative who speaks for conservatives on the pages of the uber-liberal New York Times.

Columnist/author Gary Wills, who was a William F. Buckley conservative back in the days of JFK, but who went far left by the end of the 60s.

Last week Wills resurrected the memory of Edmund Burke to trash Norquist and the Taxpayer Protection Pledge because, in his mind, those who sign it are “are signing over their souls.” According to Wills, signing the Tax Pledge makes taking the oath of office “an empty gesture.”

“That oath, sworn to God, may call for changes of position in a crisis or where better knowledge has become available,” Wills writes. “They cannot preserve and protect the country if their hands are tied and their minds closed. Their participation in congressional discussion, if that discussion affects taxes in any way, becomes a charade.”

You cannot preserve and protect the country by sinking it further and further into debt with unsustainable spending. If we’re in a crisis now, it’s been decades in the making….and the “better knowledge” here is on behalf of conservatives who finally realize that when it comes to spending, it’s never enough for the left; that no matter how far conservatives might compromise on taxes, the left will always come back for more.

Sometimes, by the way, there is absolutely nothing wrong with tying the other party’s hands and closing one’s mind to certain options via a loophole-free vow. Just ask any wife, especially one whose hubby may be susceptible to cheating.

A combo from Jon Ralston of the Las Vegas Sun and some guy named Al Hoffman Jr.

As I’ve noted here before, our friend Jon despises the Tax Pledge with every fiber of his being, in large part, I suspect, because he recognizes the Pledge’s brutal effectiveness in instilling a little fiscal discipline in wishy-washy Gumby Republicans who otherwise might be “open-minded” enough to vote for tax hikes that allow spending to increase and government to grow.

But it was the first part of Jon’s tweet which actually grabbed my attention. What “principled conservative GOPer” would speak out against the Taxpayer Protection Pledge, I wondered? So I followed the link to Hoffman’s op/ed which was published in the aforementioned liberal New York Times.

First, the fact that the op/ed was published in the NYT immediately raised a red flag. It’s rare to ever find a truly principled conservative opinion published on the pages of perhaps the most liberal paper in the universe.

Alas, the question was answered in the very first sentence of the very first paragraph of the column. “I have always been a conservative Republican,” Mr. Hoffman wrote.

Uh-oh. That statement immediately brought to mind Margaret Thatcher’s quote about being a lady; that “If you have to tell people you are, you aren’t.”

It also brought to mind the fact that the aforementioned moderate Sen. Bill Raggio regularly claimed to be a “Reagan conservative.” Which is sort of like me claiming to be a nuclear physicist. Saying so doesn’t make it so.

Secondly, in looking for some indication of who the heck this guy was, I checked out his bio-blurb at the end of the column and learned the following: “Al Hoffman Jr. was a national co-chairman for George W. Bush’s 2000 and 2004 presidential campaigns and a finance chairman for the Republican National Committee.”

Good grief. You have GOT to be kidding me. This guy’s supposed conservative bona fides amount to being associated with the president who gave us the TSA (Thousands Standing Around), No Child Left Behind, Medicare prescription drugs, and the greatest overall expansion of government since LBJ? This is a “principled conservative”?

Not. True principled, conservatives opposed W’s big-government, “compassionate” conservatism; they didn’t aid and abet it by being the man’s national co-chairman and major donor bag man.

But it’s Mr. Hoffman’s actual opinion that exposes him as a faux conservative. In the column he advises congressional Republicans to “go big.” By that he means, “Rather than go to their martyrdom as ideological purists, they should open the door to tax increases.”

Ah, yes….principled conservatism that only the New York Times could love.

How’d that work out again?

The “major stumbling block” to Mr. Hoffman’s grand bargain nirvana is “the Taxpayer Protection Pledge, a document written by Americans for Tax Reform, a conservative advocacy group, and signed by most Republican senators and representatives.”

At least he got that part right. It’s the power of the Pledge that is stiffening the Jello spines of some otherwise Gumby Republicans. And ATR is, in fact, a bona fide principled, conservative organization….unlike Mr. Hoffman himself who concludes his column with the following:

“Republicans needn’t abandon their commitment to smaller government. But by taking the high road of compromise now to achieve real reform later, they might just show which party is truly committed to its country’s future.”

Yes, yes, by all means…the way to assert you principled limited-government conservatism is to be open-minded, capitulate to the other side, and raise taxes. Good grief.

BTW, why isn’t the other side ever castigated for not being open-minded enough to compromise on cutting spending without raising taxes?

Our problem today, yesterday and tomorrow is spending, not taxes. From the federal bailouts for banks and the auto industry, to the failed Obama stimulus and cash-for-clunkers schemes, to ObamaCare. The solution isn’t to raise taxes. Not even by one, thin dime. The solution is to cut spending. Dramatically.

And if congressional Republicans blow it once again by “compromising” with the left by agreeing to this so-called “grand bargain,” they will deserve the conservative revolt and ignominious defeat they will suffer once again in 2012. This is no time to strike a deal whereby the spoiled child is allowed to have his ice cream before dinner on the promise that he’ll eat his peas later.

It’s time – as Nancy Reagan so eloquently put it – to just say no.