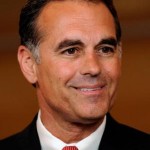 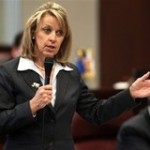 State Sen. Barbara Cegavske (R-Las Vegas) is running for the newly-created Fourth Congressional District in southern Nevada. Danny Tarkanian, a fellow Republican, is expected to join that race – which also features at least three other Republicans.

In a pre-emptive shot at Tark on Monday, Cegavske tweeted, “I have won 6-straight elections. Danny has an 0-3 record. Enough said. I am in it to win it.”

Cegavske has won six straight elections; that’s true enough. But remember, those races were for comparatively small state legislative seats (state assembly and senate) in Republican-friendly districts and with the advantage of incumbency for all but her first race.

Danny’s first race and loss was in 2004 against Democrat incumbent state Sen. Mike Schneider in a largely Democrat district and in a race in which Schneider ultimately had to pay Tarkanian $150,000 to settle a defamation of character lawsuit. It was that ugly; it was that dirty.

Still, Tarkanian only lost by less than 2,000 votes.

Danny’s second race and loss was a statewide race for Secretary of State in 2006. But before he got to the general election, Danny first had to defeat a very credible candidate, who was a former Republican Party chairman, in the primary.

And to be fair, if Cegavske is going to count Danny’s 2010 loss in the GOP primary for U.S. Senate, then she should count this primary victory as a win, as well. That would make his actual record 1-3, not 0-3. But I digress.

Tarkanian then went on to face Ross Miller, the son of a former Nevada Democrat governor and political icon, in the general election. But in addition to running against Miller and the Miller machine, Tarkanian also faced a very conservative and highly respected Janine Hansen, who was running in the general election as the Independent American Party candidate.

Which brings us back to that 2010 statewide GOP primary race for U.S. Senate. Yes, Danny lost. But he lost in a race with not one, not two, not three…but four credible, viable, well-funded Republican opponents (as well as some others). It was an extremely tough race in which Danny came in a close third to Sharron Angle and Sue Lowden.

And just in case anyone reading this thinks I’m just a big Tarkanian fan who’s shilling for Danny, you obviously never read my Tark Tales blog in that 2010 race. Indeed, relations between the two of us back then would have to warm up just to be considered frozen. It was that bad.

On the other hand, those who think I just have it in for Barbara are dead wrong, too.

Indeed, regular readers will remember how actively I lobbied for her to become the new Nevada State Chairman for the American Legislative Exchange Council (ALEC) last year after former Senate Minority Leader Bill Raggio tried to maneuver her out of the position despite her superior qualifications and tenure in the organization that made Cegavske the obvious choice.

No, Barbara and I go way back. There’s no animosity here.

But the notion that you can just look at Barbara and Danny’s win-loss records without context and declare that the candidate with the better record is the stronger candidate in the CD4 race is simply not true.

And by the way, wasn’t Tim Tebow 0-3 in his last three games before Sunday’s victory against Pittsburgh? I’m just saying.