The Return of St. John (McCain) 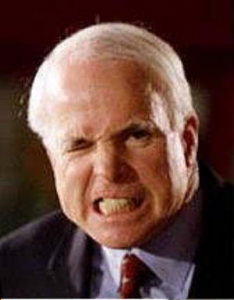 On Meet the Press Sunday, McCain whined about Sheldon Adelson helping to level the playing field for Newt Gingrich vs. the Mitt Romney war-chest. “I guarantee you there will be a scandal,” St. John warned ominously. “There is too much money washing around politics. And it’s making parties irrelevant, by the way.”

The parties are pretty much irrelevant today thanks almost entirely to an offensive, anti-free speech law known and reviled as “McCain-Feingold.” Co-authored by…Sen. John McCain.

And the major reason major donors are donating to super-PACs now is because of other stupid campaign finance reform laws dating back to the 70’s that placed ridiculously low limits on direct contributions to the actual candidates.

To put the candidates back in charge of their own campaigns and make the parties relevant again, repeal those dumb laws…allow unlimited contributions from individuals, corporations and unions…and post all such donations on a public website within 48 hours. Just give the voters the information and let them decide if the donations mean anything or not.