The Obama Gang: Time for Newt to Work up a Number 6 on ’em! 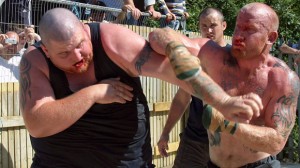 But I think last night’s performance by Newt Gingrich – especially in responding to John King’s opening question about his ex-wife’s accusations – is going to take a lot of undecided Republicans and soft Romney supporters and move them from “It’d be great if Gingrich could actually give Mitt a run for his money, but it ain’t gonna happen” to “You know what, the son-of-a-gun might actually be able to pull it off!”

And don’t think Romney’s peeps aren’t sayin’ the same thing this morning. The smell of fear is in the air.

With that said, let me take this opportunity to disclaim that while I’ve been a Newt supporter for almost 20 years, I am also a paid adviser to the Winning Our Future PAC; a super-PAC supporting the former House Speaker. Take it for what it’s worth.

That said, Mitt Romney reminds me of Niles Crane (Frasier). Well-bred and intellectually superior, but when he wants to show anger or passion it comes off in a decidedly forced and non-threatening way.

“You, my good fellow, are about to get yourself a good thrashing!” Which is the last thing he says before getting knocked out cold with a single punch.

And then there’s Gingrich…a bare-knuckled political street brawler if there ever was one.

Newt’s opponents, his detractors, some former colleagues, the media, the Left, the Right, the Center…and now even his ex-wife…have thrown everything, including the kitchen sink, at the guy. And he’s still standing. If anyone had any doubts as to whether this guy can take a punch, those concerns were obliterated last night.

Meanwhile, Romney can’t even handle the issue of releasing of his tax returns.

I mean, good grief. Can’t he and his handlers see that they’re only feeding the suspicion that there’s something he’s trying to hide? “And if there is,” Republicans are saying to themselves, “maybe we better find out what it is BEFORE we nominate the guy, not after it’s too late.”

Ditto the Bain video. Does anyone really think that documentary wasn’t going to come out if Winning Our Future PAC hadn’t released it? No, it was gonna be used against Romney one way or the other. The difference is, it came out now while Republican primary voters still had an opportunity to consider whether the information was worth worrying about, not in the fall after it was too late.

And if Romney IS the GOP’s nominee next fall – and that no longer seems inevitable – thanks to the video’s early release it’ll be old news when the Democrats and Obama try to use it against him. It will have lost its potency. So Winning Our Future will have actually done the guy a favor.

But let’s get back to last night’s debate smackdown.

A couple things are clear. Either Romney or Gingrich could beat Obama in November. And either Romney or Gingrich could lose to Obama in November. So the question a lot of Republican voters are starting to ask themselves is: “If we’re gonna lose in the fall, do we want to go out with a whimper, the way we did with Bob Dole and John McCain; or do we want to go out in a blaze of glory?”

Republicans can bring a knife to a gunfight with the Obamamaniacs by nominating Romney. Or they can pick Newt and “work up a ‘Number 6’ on ’em!”

What? You don’t know what a “Number 6” is (Blazing Saddles)?

Hedley Lamarr: “Number 6”? I’m afraid I’m not familiar with that one.

Taggart: Well, that’s where we go a-ridin’ into town, a whampin’ and a whompin’ every livin’ thing that moves within an inch of its life.

Gingrich is the only candidate left in the GOP nomination race ready, willing and able to work up a Number 6 on Obama and the Democrats.

Mitt *might* be able to give The Chosen One a good thrashing – but if he can’t even handle an underfunded Gingrich over the Bain video and his tax returns, why would anyone believe he’d be able to survive the beat-down he’s gonna get once the dumpster-diving Boys from Chicago, armed with a billion dollars, are unleashed on him?

But you can’t deny that if he’s the nominee, no matter what Obama & Company throw at him, he’ll kick, swing and bite back. And every chance he’s given, he won’t hesitate for even second to “Rochambeau” (South Park) the community organizer.

Indeed, Newt reminds me of the guy whose pappy named him “Sue” (Johnny Cash).

For you young ‘uns, here’s the gist of the story. A father named his son “Sue” before abandoning him. As such, his son got the snot beat out of him on a fairly regular basis as a kid. And once he became an adult, he went looking for the man who gave his that girl-name to settle the score. We now pick up the story…

Well, it was Gatlinburg in mid-July
And I just hit town and my throat was dry,
I thought I’d stop and have myself a brew.
At an old saloon on a street of mud,
There at a table, dealing stud,
Sat the dirty, mangy dog that named me “Sue.”

Well, I knew that snake was my own sweet dad
From a worn-out picture that my mother’d had,
And I knew that scar on his cheek and his evil eye.
He was big and bent and gray and old,
And I looked at him and my blood ran cold
And I said: “My name is ‘Sue!’ How do you do!
Now your gonna die!!”

Well, I hit him hard right between the eyes
And he went down, but to my surprise,
He come up with a knife and cut off a piece of my ear.
But I busted a chair right across his teeth
And we crashed through the wall and into the street
Kicking and a’ gouging in the mud and the blood and the beer.

I tell ya, I’ve fought tougher men
But I really can’t remember when,
He kicked like a mule and he bit like a crocodile.
I heard him laugh and then I heard him cuss,
He went for his gun and I pulled mine first,
He stood there lookin’ at me and I saw him smile.

And he said: “Son, this world is rough
And if a man’s gonna make it, he’s gotta be tough
And I knew I wouldn’t be there to help ya along.
So I give ya that name and I said goodbye
I knew you’d have to get tough or die
And it’s the name that helped to make you strong.”

He said: “Now you just fought one hell of a fight
And I know you hate me, and you got the right
To kill me now, and I wouldn’t blame you if you do.
But ya ought to thank me, before I die,
For the gravel in ya guts and the spit in ya eye
Cause I’m the son-of-a-bitch that named you “Sue.'”

Sue. Newt. They almost rhyme. And who better to work up a Number 6 on ‘em?