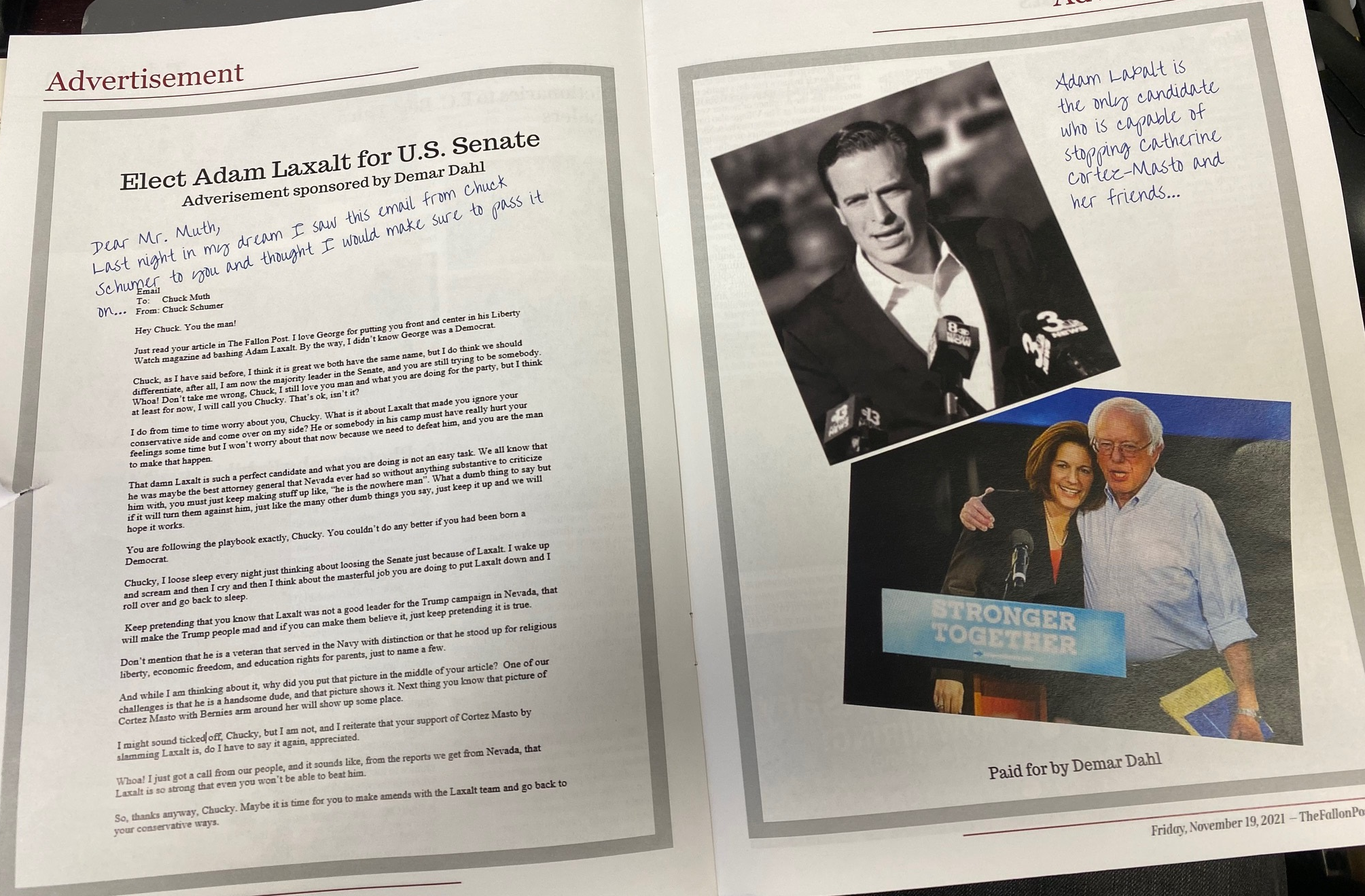 Both are extremely thin-skinned.  Both have a deep vindictive streak.  Both harbor a strong sense of privilege and entitlement.  Both suffer a “savior complex.”  Both pine to play in the DC swamp instead of the Nevada desert.  Neither takes criticism very well.

And now it appears they’re having the same kinds of dreams.

Now, I’ve made no secret of my belief that Adam is a weak candidate for Nevada’s U.S. Senate seat currently being held by Democrat incumbent Sen. Catherine Cortez-Masto-Reid.  And I detailed my reservations in a “Nowhere Man” column back in October.

That didn’t sit well with Team Laxalt.  Next thing you know I’m getting snippy little emails from Trump surrogate Ric Grenell; throwing a conniption and telling me that if I didn’t support Adam that means I don’t support Donald Trump since Trump has endorsed Adam.

Anyway, a couple weeks later a full-page/double-truck ad attacking me was run in the Fallon Post headlined: “Elect Adam Laxalt for U.S. Senate.” It was supposedly authored and paid for by former Elko County Commissioner Demar Dahl.

Which is par for the course.  Adam has a habit of getting others to fight his fights for him.

For the record, I don’t believe there’s any way on God’s green earth that Mr. Dahl wrote this ad.  He’s a rural cattle rancher.  It’s just not his style.  Too juvenile.

And campaign officials swear the campaign itself had nothing to do with it.  Leading me to believe Laxalt himself wrote this Ralston-like ad.  After all, as noted earlier, the two are so much alike in so many ways.

In any event, the full-page ad consisted of what was supposed to be a letter from Democrat Senate Majority Leader Chuck Schumer addressed to me with this hand-written note by, supposedly, Mr. Dahl above it…

“Dear Mr. Muth, Last night in my dream I saw this email from Chuck Schumer to you and thought I would make sure to pass it on…”

Ah, the old “dream sequence.”  Just like those goofy fantasy columns Ralston writes that he thinks are clever but are really just stupid and inane.  In the same vein, here’s the text of Mr. Dahl’s grammatically-challenged, Ralstonesque letter…

“To: Chuck Muth
“From: Chuck Schumer

“Just read your article in The Fallon Post.  I love George for putting you front and center in his Liberty Watch magazine and bashing Adam Laxalt.  By the way, I didn’t know George was a Democrat.”

He’s also not a fan of, as George calls him, “Little Lord Laxalt” and references him on social media as “Adam Laxalt-Domenici,” a nod to Adam’s actual father, former U.S. Sen. Pete Domenici. But to suggest his opposition means George is a “Democrat” is, well, just plain stupid.

Dahl/Schumer (or whoever wrote this for him) continues…

“Chuck, as I have said before, I think it is great we both have the same name, but I do think we should differentiate, after all, I am now the majority leader of the Senate, and you are still trying to be somebody. Whoa!  Don’t take me wrong.  Chuck, I still love you man and what you’re doing for the party, but I think at least for now, I will call you Chucky.  That’s OK isn’t it?”

Absolutely.  I love a good schoolyard taunt as much as anyone.

“I do from time to time worry about you, Chucky.  What is it about Laxalt that made you ignore your conservative side and come over on my side?  He or somebody in his camp must have really hurt your feelings some time but I won’t worry about that now because we need to defeat him, and you are the man to make that happen.”

Seems to me the person whose feelings got hurt was Adam.  Why else pay for a full-page ad whining about an opinion column by a lowly grassroots activist “trying to be somebody”?

And for the record, criticizing Adam and his entitlement mentality in this race isn’t the same as supporting Cortez-Masto-Reid.  Much as he’d like to pretend otherwise, Laxalt has a serious, viable conservative challenger in the GOP primary, Sam Brown.

“That damn Laxalt is such a perfect candidate and what you are doing is not an easy task.  We all know that he was maybe the best attorney general that Nevada ever had so without anything substantive to criticize him with, you must just keep making stuff up like, ‘he is the nowhere man.’  What a dumb thing to say but if it will turn them against him, just like the many other dumb things you say, just keep it up and we will hope it works.”

“Perfect candidate”?  “Best attorney general that Nevada ever had”?  Anyone doubt this egomania wasn’t inked by Adam himself?

“You are following the playbook exactly, Chucky.  You couldn’t do any better if you had been born a Democrat.”

Actually, I WAS born a Democrat.  Just like Ronald Reagan.  But we both came over from the Dark Side.  And it’s one of the reasons I can detect BS coming from an establishment Republican and DC swamp creature so well.

“Chucky, I loose (sic) sleep every night just thinking about loosing (sic) the Senate just because of Laxalt.  I wake up and scream and then I cry and then I think about the masterful job you are doing to put Laxalt down and I roll over and go back to sleep.

“Keep pretending that you know that Laxalt was not a good leader for the Trump campaign in Nevada, that will make the Trump people mad and if you can make them believe it, just keep pretending it is true.”

For the record: Adam was Trump’s campaign chairman in Nevada in 2020 and Trump lost our state by over 33,000 votes.  I’m not “pretending” that Adam helped cost Trump Nevada.  Adam DID help Trump lose (not “loose”) our state.  You could look it up.

If the President and his people should be mad at anyone, it should be Adam.  He blew it.  Bigly.

“Don’t mention that he is a veteran that served in the Navy with distinction or that he stood up for religious liberty, economic freedom, and education rights for parents, just to name a few.”

Nah, Adam didn’t write this, did he?  But since he wants to bring military service into this discussion…

While Adam served as a Navy JAG lawyer, his GOP primary opponent was a combat soldier whose SUV was blown to smithereens by an IED in Afghanistan, damn near killing him and resulting in three years of painful rehabilitation.

So if military service is to be a basis for choosing the best GOP candidate, Purple Heart recipient Sam Brown wins hands down.

“And while I am thinking about it, why did you put that picture in the middle of your article?  One of our challenges is that he is a handsome dude, and that picture shows it.  Next thing you know that picture of Cortez Masto with Bernies arm around her will show up some place.”

“I might sound ticked off, Chucky, but I am not, and I reiterate that your support of Cortez Masto by slamming Laxalt is, do I have to say it again, appreciated.”

Again, despite Laxalt’s entitlement mentality, supporting Capt. Brown in the GOP primary is NOT the same as supporting Cortez Masto.  To falsely claim it is amounts to – dare I say it? – a Big Lie.

“Whoa!  I just got a call from our people, and it sounds like, from the reports we get from Nevada, that Laxalt is so strong that even you won’t be able to beat him.”

Nah, Adam didn’t write this, did he?

“So, thanks anyway, Chucky.  Maybe it is time for you to make amends with the Laxalt team and go back to your conservative ways.”

“Make amends with the Laxalt team”?  For what?  For not bowing down, kissing The Chosen One’s arse, and accepting without question the DC swamp’s anointment of him as our savior here in Nevada despite his documented record of electoral failure?

On the second side of the two-page ad, Dahl (or whoever wrote this for him) writes…

Well, I know they want to believe that. And want Republican voters in Nevada to believe it.  But the fact remains that Laxalt has a proven record as a terrible candidate and electoral weakness.

And – after having shocked the political establishment by raising over $1 million in the last fundraising quarter – a strong argument can be made that Capt. Brown would actually have a better chance to knock off Cortez-Masto-Reid in the general election.

Plus, the very fact that Laxalt is so thin-skinned, so sensitive and so upset over a less-than-flattering/emperor-has-no-clothes opinion column that he, or someone close to him, persuaded Mr. Dahl to put his name to a silly full-page ad attacking me shows how scared he is of having his weaknesses as a candidate exposed.

Whoever thought running this Ralston-like ad was a good idea and would stop me from criticizing The Chosen One is dumber than dandruff.  As a Navy veteran, Laxalt should be familiar with what Japanese Admiral Isoroku Yamamoto said after his Pearl Harbor sneak attack…

“I fear all we have done is to awaken a sleeping giant and fill him with a terrible resolve.”

* Republican Jay Dixon has announced that he’s running for the Assembly District 26 seat in Washoe County.  The seat is currently held by Republican Assemblywoman Lisa Krasner who is giving it up to run for the State Senate.