The Justin Jones Affair: Part I

(Chuck Muth) – The City of Las Vegas has now lost two huge court battles (with at least two more on the horizon) over the defunct Badlands Golf Course, which will end up costing city taxpayers at least tens of millions, if not hundreds of millions, of dollars.

The bottom line is this: The city abused its zoning powers to deny the owner of this private property his ability to develop it into a high-end housing project; essentially a “taking” by the government without due compensation.

Seeing the writing on the wall, the city recently – finally – attempted to settle the matter with the developer.  But as has been their wont, city negotiators reportedly changed the initial, agreed-to terms of the settlement at the last minute and the developer responded: “No dice.”

Well, a similar situation is playing out in Clark County.  Taxpayers, grab your wallets!

At issue is a 20+ year dispute over a major housing project out near Red Rock Canyon.  The land is privately owned by Jim Rhodes, the builder of the successful Rhodes Ranch in southwest Clark County.

Let’s start with this: The land is currently the site of a gypsum mine.

I went out there a week ago to look around.  And it’s not the kind of mine most people think about, where you dig tunnels underground.  These are above-ground rocks that are crushed and refined to make plaster and drywall for construction.

From an aesthetic point of view, let’s just say it’s not exactly pretty.  More akin to the surface of the moon.  There’s nothing “pristine” about it. 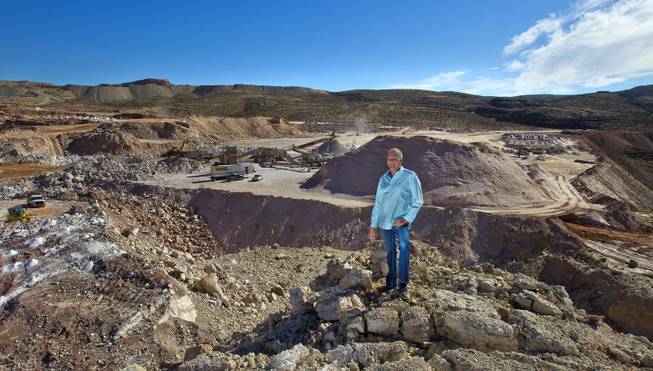 Rhodes bought the land with the intent of replacing this ugly landscape with a beautiful new master-planned community complete with stores, schools, cafés, and single-family homes.

But a gaggle of environmental extremists, liberal agitators and NIMBY’s (“Not In My Backyard”) have coalesced to stop the project at any cost.

At the heart of their argument is the notion that the view of a beautiful new housing community would be uglier than the gypsum mine for hikers, bikers and rock climbers miles away at Red Rock Canyon – despite the fact that other such communities have already been built within eye-sight of the National Conservation Area.

“What I don’t get,” then-Clark County Commission Chairman Steve Sisolak, now Nevada governor, wrote to a reporter way back in 2011, is that “Summerlin is much closer to Red Rock and no one complained about that.  I really think a lot of this is about Rhodes.”

In other words, the opposition isn’t about business.  It’s personal.  And that’s NOT the way government is supposed to act; at least not a government charged with administering equal protection under the law.

Another objection by the enviros, liberal wackadoodles and NIMBY’s was that Rhodes sought to re-zone the gypsum land from “rural” to high-density housing in order to build the master-planned community.

Sounds like a legitimate objection at first blush, right?  But get this…

ALL of Clark County, outside of the Strip corridor, was once zoned “rural.”  And ALL developments – whether for housing, schools, shopping centers, malls, parks, hospitals, etc. – had the land they were built on re-zoned by the county commission.

So Rhodes wasn’t asking for anything that ALL who came before him (and after) have received for their own projects.  That “equal protection” thingy again.

So venomous was the early opposition to the project that in 2003 then-Nevada State Sen. Dina “I’m Not Happy” Titus shoved through the Legislature a bill to handcuff the Clark County Commission and block it from increasing the density on Rhodes’ privately-owned land.

Rhodes took the new law to court.  And won.

So in 2010, Clark County entered into a settlement agreement that would, as recently reported by Daniel Rothberg, allow Rhodes “to submit an application to begin permitting a higher-density project” and require the Commission to process the application in “good faith.”

It did anything but…which I’ll get into in Part II.  And don’t worry.  Clark County Commissioner Justin “Red Rocker” Jones makes his appearance soon.  Don’t touch that dial!

“Negotiations for a potential $64 million settlement between the city of Las Vegas and a development company behind a stalled plan to build housing on the defunct Badlands golf course broke down a day before the deal was set for discussion at City Hall.” – Las Vegas Review-Journal, 8/3/22