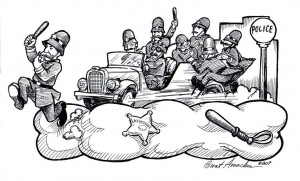 To be honest, it didn’t exactly take a crystal ball to see this coming a mile away.

Before I left Saturday morning to take my wife and a pair of the nicest neighbors you’d ever want to have to the GOP presidential caucus, I wrote about what to watch for later that evening once the caucus results were released:

“And finally, will the caucus itself come off without a hitch, or will Nevada Republicans once again end up a national embarrassment?”

I don’t know about the rest of the valley, but at the precinct meeting I monitored – despite the first balloting being done on the wrong ballots – we were in and out in less than an hour. So let’s say other caucus sites weren’t so well-organized. Still, by all accounts just about all of them were finished by noon.

Which is around when the first sign that this was gonna be a major league PR mess emerged, as the Los Angeles Times reported that their reporter on the ground here in Las Vegas, Ashley Powers (no relation to Austin), had been foolishly thrown out of a precinct meeting as a “spy.”

Anyway, with much fanfare, pomp and e-circumstance, the Nevada GOP announced a couple weeks ago that it was going high-tech and would start releasing the caucus results at 5 p.m. via Twitter. At around 7 p.m. the party tweeted that with only 8.1% of the precincts counted – and none from Clark County – Mitt Romney was way ahead with 40.5% of the vote.

That was enough for the Associated Press to call it for Romney and for Romney to begin working his way down to the victory party at the Red Rock Casino.

Meanwhile, the “after sundown” caucus – hastily approved and clumsily planned – to accommodate Jewish and 7th Day Adventist Republicans got underway…but not without major controversy. As Las Vegas Sun columnist Jon Ralston tweeted at the time: “So why such big crowd at the Adelson school? Because — wait for it — Ron Paul’s campaign did a robocall to supporters to crash.”

And crash they did.

I received this text message later in the evening from a longtime political operative whose friend received the call:

“Ron Paul’s campaign called (name deleted) at 6:30 and told him he needs to caucus again because the caucus this morning didn’t count and they were doing it over. They were fraudulently telling people to vote again!!! I couldn’t believe it. If I wasn’t there to explain to him why there were 2 caucuses today he would have gone back!”

At 7:30 p.m., Ben Spillman of the Las Vegas Review-Journal reported on “repeated clashes between local Republican party officials and would-be caucus-goers who resented being required to affirm their religious beliefs before being allowed to participate.”

Spillman also referenced the Paul campaign robocall, reporting that it stated “that if they missed an earlier caucus for any reason they could show up at the sundown event” and still vote. Chaos ensued.

An 83-year-old man, Alan Kaplan, objected to a 29-year-old man – who objected to being required to sign a religious oath statement – being escorted out of the building by makeshift “bouncers,” including Assemblyman John Hambrick. “You want to take him out, take me out, too, you son of a bitch,” Kaplan yelled at Hambrick.

Later Kaplan told Spillman that he fought in Vietnam, but “I didn’t fight for assholes like that.” Lovely.

While all of this was going on, folks on the East Coast – which is home to the national media covering the election and three hours ahead of us – were starting to go to bed, with less than 10 percent of the high-tech caucus vote officially announced on Twitter. Newspaper deadlines were already being missed left and right.

At 6:59 p.m., Republican National Committee Chairman Reince Priebus – the guy who put the strong arm on Nevada to move its caucus from January 14 to February 4 – tweeted from his iPhone: “Thx @nvgop – keep the results coming – nice work!”

Depends on your definition of “nice work.” Priebus would surely live to regret that tweet by night’s end.

At 7:39 p.m. – with still just 10% of the caucus vote officially released – Romney took the stage at his victory party.

Seven minutes later, the Nevada GOP tweeted that 14.3% of precincts had now reported in, with Romney ahead of Gingrich 39-29%.

At 7:54 p.m., Steve Sebelius of the Las Vegas Review-Journal tweeted: “Coming up on one hour AFTER @nvgop originally said we’d get Clark results. And still no Clark results. What’s with?!”

Two minutes later, the Nevada GOP released results with all of 16.6% of precincts reporting. Romney ahead by about 11 points over Gingrich.

By 9 p.m., the party still had only released 1/5 of the precinct results.

Obviously, the Paul robo-call was effective, but it’s hard to see how the party can accept these results.

Indeed, the Las Vegas Sun reports this morning that “While many of the participants in the evening caucus qualified under the religious exemption, others – who missed the morning caucus for a variety of reasons including work, illness or oversleeping – said they signed the declaration anyway so they could caucus.”

In other words: They were ineligible to vote by the established rules…and they lied.

At 9:53 p.m., Spillman tweeted that the sundown caucus was concluding “with a 70s costume party and free food.”

At the same time, the Nevada GOP tweeted that “787 out of 1,835 precincts” had been counted. “Just awaiting counts from Clark County!”

I say again: My precinct wrapped up voting before 10:00 a.m. – and just about every other precinct in Clark County, not counting the sundown caucus, was finished voting by noon. TEN HOURS earlier!

At 10:26 p.m. Ralston started a new Twitter hashtag: #thingsfasterthannvgop. He started the ball rolling with “The evolution of man.” Others quickly joined in; if for no other reason than to pass the time. Some examples:

At 10:51 p.m. the ridicule went national, with Nate Silver of the New York Times posting this “Hangover”-inspired tweet: “Nevada GOP to release Clark County results just as soon as it figures out why Mike Tyson’s tiger is in their bathroom.”

At 11:12, Ralston tweeted: “Even if the Mensa members down at Clark GOP HQ were re-counting every ballot by hand, it shouldn’t be taking this long.”

At 11:37 p.m. Danny Tarkanian – husband to Nevada GOP Chairman Amy Tarkanian, who is resigning officially as of today – tweeted: “Counting ballots at Clark GOP. We might not finish before my wife’s term ends.”

Ouch. I went to bed. But Anjeanette Damon of the Las Vegas Sun soldiered on.

At 12:58 a.m. this morning she tweeted: “Multiple precincts in Clark where precinct capt’s weren’t diligent in signing people in. Ballot count doesn’t match sign-in counts.” She followed that up with: “Unconfirmed report that precincts with mismatched ballot/sign-in counts will be dumped. Lots of votes in question.”

Uh-oh. This is gonna get ugly. REAL ugly.

At 3:48 a.m. the Nevada GOP reported that 56% of precincts had officially reported.

At 4:06 a.m. it reported results with 70.4% of precincts officially reporting.

At 6:15 a.m., the liberal Public Policy Polling firm tweeted: “No one cares because it’s so lopsided but this is a WAY worse vote counting fail than Iowa.” It followed that up with: “I guess everyone who wondered how the Nevada GOP could be so incompetent as to nominate Sharron Angle has gotten their answer now.”

By 8:33 a.m. this morning, the vote count in Clark County STILL wasn’t complete…leading Ralston to tweet: “Which will come first: Final score of Super Bowl or final score of #nvcaucus? Any bets?”

Morning Score chimed in: “Romney won an anti-climactic, 25-point victory in Nevada last night. The biggest loser appears to be Nevada’s Republican Party, which is still counting the ballots from Clark County.”

It added: “A river of criticism flowed across Twitter last night. Every political junkie in America was peeved with what they viewed as the inept Clark County Republican Party.”

Oh, and just to add a little insult to the injury, while Chairman Tarkanian predicted that 70,000 Republicans would turn out and participate in the caucus this year, it looks like my prediction of 40,000 is gonna be much closer.

Mercifully. Can you imagine how much worse this fuster-cluck would be if 70K actually had shown up?!!

As well Nevada Republicans should.

The Nevada GOP this morning is a complete, total, national laughingstock. This is beyond embarrassing. This is beyond humiliating. GOP leaders here ought to be forced to wear brown bags over their heads from now until the convention.

Better yet, every one of them should follow Amy Tarkanian’s lead and resign. Today. Top to bottom. No party leadership would be better than what these folks have provided. What has occurred is inexcusable.

And it REALLY blew the opportunity to do the right thing for religious voters by waiting too late to do anything to accommodate them…and then not affording WORKING Republicans the same opportunity.

The final indignity. At 9:10 a.m., just before I finished this up, Ralston tweeted that “campaign attorneys (are now) involved.” Lord, help us.

And some people still wonder why I’m not a registered Republican in this state?

I’ve had enough. Time to get ready for Lingerie Bowl IX!!!

“You are not going to have another Iowa. We will have an accurate vote count.” – Nevada Republican Party Chairman Amy Tarkanian in a tweet to Republican National Committee Chairman Reince Priebus at 9:07 a.m. this morning