The Case for Four More Years: 7 “Not Donald Trump” Reasons to Re-Elect the President 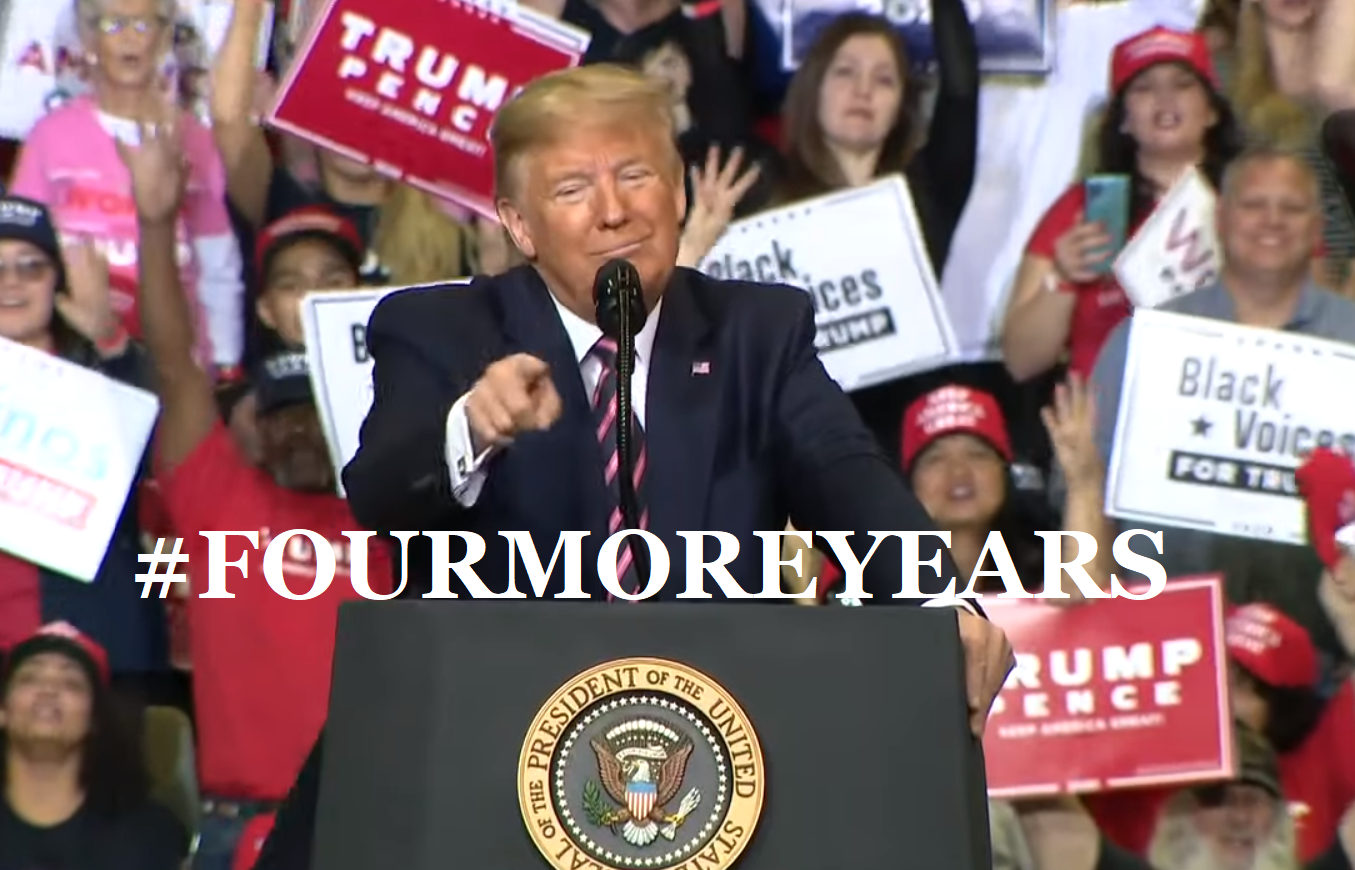 (Chuck Muth) – OK, there are about a gazillion reasons to give President Donald Trump another four years in the White House, including…

1.)  Ever since Ronald Reagan the “establishment” GOP has been forcing “pale pastel” candidates on us: George Bush 1.0, Bob Dole, George Bush 2.0, John McCain and Mitt Romney.

Bush 1.0 famously broke his “no new taxes” pledge and gave us Supreme Court Justice David Souter – a disaster on the bench.

Bush 2.0 – sold to conservatives as the rightful heir to the Reagan Revolution – gave us the TSA, No Child Left Behind and The Bridge to Nowhere.  He also stuck us with Chief Justice John Roberts and tried to stick us with Harriet Miers on the Supreme Court.  All disasters for conservatives.

It’s been just as bad down the ballot.  GOP, Inc. used its money, political clout and a gaggle of entrenched consultants to thwart conservative candidates in state and local primaries for decades.

Not Donald Trump.  He upset their apple cart in the swamp “bigly.”

As such, many establishment “Never Trumpers” in Congress and elsewhere have been booted out of office or forced into early retirement.  Former House Speaker Paul Ryan and former U.S. Sens. Jeff Flake and Dean Heller come to mind.

Fact is, Donald Trump didn’t “kidnap” the Republican Party.  He snatched it away from the wishy-washy, middle-of-the-road establishmentarians and gave it back to the GOP’s grassroots activists.  And his re-election will cement the foothold conservatives have gained under him for years to come.

2.)  For the last twenty years, “compromise” was the name of the game for Republicans on a wide variety of public policy issues – except in cases of outright capitulation.  Conservatives have been less angry at losing battles than with the party’s “leaders” not having the stomach to even fight them.

While he hasn’t won every battle – blocked by “Never Trumpers” in his first two years and Pelosi these last two – the president’s gone to the wall for the conservative issues, public policies and legislation.

With the Paul Ryans gone, just imagine how far the conservative agenda could advance with Trump back in the White House for four more years if the GOP holds the Senate and retakes the House.

Donald Trump has taught Republicans how to fight; and that when you fight rather than forfeit, you win more.  It’s just that simple.

3.)  For the last 50 years, Democrats have treated politics like a blood sport.  Brass-knuckles.  Kicking, scratching, gouging.  Nothing’s off limits.  Win at ALL costs.  Remember the Kavanaugh confirmation hearings?

He’s clearly not Miss Manners.  And he sure as shootin’ ain’t bringin’ a knife to a gunfight.

The President has demonstrated, over and over again, a willingness to compromise with Democrats but only if it’s a win-win for both sides.  The days of Democrats getting the gold mine and Republicans getting the shaft are done.

And instead of bending over and saying, “Thank you, sir, may I have another?” Trump has called Democrats out for their failed ideology and endless obstruction.  By name.  And usually not a flattering name at that.  Crooked Hillary.  Sleepy Joe.  Pocahontas.  Crazy Bernie.  Nervous Nancy.  Cryin’ Chuck.

Sure, some are put off by the name-calling.  But it’s clearly effective.

And seriously, how is it any different from Democrats referring to Republicans over the years as racists, misogynists, homophobes, tea-baggers, white nationalists, bible-thumpers, gun nuts, fascists and, of course, “deplorables”?

Or worse, how they refer to black conservatives and Republicans as Uncle Toms, Oreos, sell-outs and “house niggas.”

What President Trump has given the left is a taste of their own medicine, Brooklyn-style.  And the snowflakes among them are melting down over it.  Curled up in a ball.  Whimpering.  Begging for a therapy puppy.  “Orange Man was mean to me!”

Well, suck it up, buttercups!  There’s a new sheriff in town.

4.)  In the “old days,” Republican candidates and campaigns dealt with the media under the rule of “don’t pick a fight with someone who buys ink by the barrel and paper by the ton.”

He knocked over the barrel, set the paper ablaze and went to war with them on Twitter.  Whether you like his tweets or not – personally, I love them – the man has rewritten the rules for these media radicals; these “enemies of the people.”

A couple weeks after the 2016 election I attended a briefing at Facebook’s headquarters in San Francisco.  The Facebook folks were all-a-twitter, so to speak, over what it complained was “fake news” put out by conservatives during the campaign.

But before they could wrap the “fake news” moniker on the right, Donald Trump successfully wrapped it around the collective necks of the liberal mainstream news media.  And it stuck.

CNN and MSNBC haven’t been the same since.  Ratings have dropped like a rock.  And while they’ve never given up going on the attack, they’re now forced to play defense, as well.  They’ve been exposed, knickers around their knees, for all the world to see.

And to top it all off, he further embarrassed them by blowing off their annual White House Correspondents dinners!

Worse, EVERY time they think they “got him,” he slips away.  Hello, impeachment!  The man’s been like the Road Runner, dodging every anvil and ducking every Acme rocket.  Beep!  Beep!

No wonder the biased, enemy of the people fake news industrial complex is all but embedded with the Biden campaign.

5.)  Historically, Democrats have been able to count on getting 90 percent-plus of the black vote all across the country.  Republicans, historically, have either given up on this voter bloc or have reached out to it in a pandering, ham-handed way.

He aggressively and boldly asked for the African-American vote in 2016.  He pointed out the systemic failures of Democrats in major urban areas and rightfully asked, “What the hell do you have to lose?”

He then proceeded to put action behind his campaign rhetoric by pushing through his First Step Act criminal justice bill, boosting funding for Historically Black Colleges and Universities, expanding Opportunity Zones in low-income communities and bringing black unemployment down to historic lows.

His aggressive outreach to the black community has fueled the BLEXIT (Black Exit) Movement from the Democrat Party.  And Black Voices for Trump is large, powerful and growing.

No wonder Joe Biden felt it necessary to scold black voters his party has taken for granted for generations that if you support President Trump, “you ain’t black.”

6.)  There is more incompetence in the field of political consulting than in any field other than TV psychiatry.

And for as long as I’ve been actively involved in politics, I’ve heard complaints that the GOP has a messaging problem.  That’s because the stable of entrenched DC Republican “professional” consultants are almost solely focused on campaign tactics and mechanics.

The man is, whatever else you might say about him, a master marketer.  He doesn’t just tell people what they want to hear.  He makes them feel the way they want to feel.  Proud to be an American.  Hopeful.  Happy.  Winners.

And that doesn’t even count the support he’s getting from the modern-day incarnation of the country’s “silent majority.”

The GOP will never be the same.

If Donald Trump and Mike Pence are re-elected, they will, as Pence said, Make America Great Again – AGAIN!