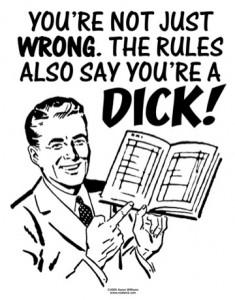 Sure, the GOP establishment lost yesterday with the re-election of Nevada GOP boss Michael McDonald, but do you know who The Biggest Loser was?

All last week Ralston was carrying the GOP establishment’s water; constantly taking shots at McDonald and ridiculing the conservative members of the Central Committee, referring to them as “loons” among other things.

On Thursday, he obtained a draft document that had been proposed to McDonald to send to the entire Central Committee; a document that was pretty harsh on his opponent. To which Ralston tweeted…

“I wonder who would have penned that nasty missive for the GOP chair. Maybe @citizenoutreach knows?”

Note that Ralston used the Citizen Outreach twitter handle instead of using my personal one, which was nothing short of a naked, ham-handed attempt to insinuate that my non-profit organization, Citizen Outreach, was involved in partisan politics.

“No idea. It wasn’t anyone from Citizen Outreach.”

Now bear in mind the document in question was never approved by McDonald and it never went out…a fact Ralston never even bothered to try verifying with McDonald before publishing it.

Shortly thereafter, McDonald issued a statement saying just that; that the document was never approved and never went out. That statement was sent to me and I posted it on my Muth’s Truths blog. I then tweeted the following and linked to McDonald’s statement…

To which Ralston responded…

To which I replied…

“I didn’t defend McDonald; just published his statement pointing out that you’re a sloppy ‘journalist.’ #stopbeingadick”

And that really got under the thin-skinned bloggers skin! Ralston then huffily tweeted…

“Never a bad day when you’re publicly attacked by a party chairman and his Internet thug, who uses classy phrases like ‘dick.’”

I swear this guy is truly the Hypocrite King.

Apparently it’s OK for him to use “classy phrases” such as “loonville” and “thug” when referring to conservative activists – but he got his widdle feelwings hurt at being told to stop acting like a “dick.”

In other words, Ralston can dish it out…but he can’t take it.

So even when Jon’s being a dick, PLEASE don’t email or tweet him urging him to stop being a dick because if you do, he’ll just act and write and blog and tweet like an even bigger dick.

He can’t help himself.