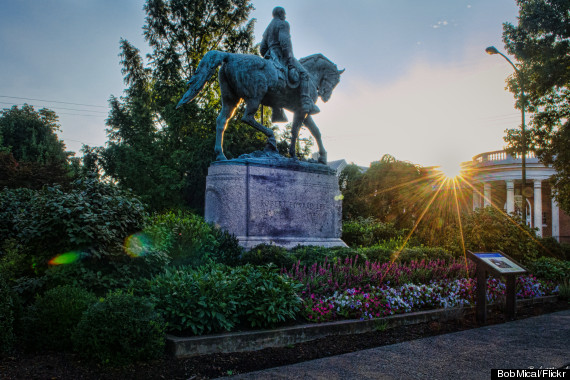 I remember when the Taliban first popped up on my radar screen.  It was in March 2001 – six months before 9/11 – and the world community was outraged at its destruction of the Buddhas of Bamiyan statues in Afghanistan.

Why would anyone blow up statues that had been standing for centuries?  I mean, they’re just statues, right?

Well, because they “offended” Muslim fundamentalists who believed they were “un-Islamic” and a violation of Sharia law. So Mullah Omar had them blown to smithereens.

Which brings us to this weekend’s tragic events in Charlottesville, Virginia…

Let’s get this out of the way first: Alex Fields, the 20-year-old human piece of garbage from Ohio who drove his car into that crowd of people – killing one and seriously injuring more than a dozen – should be tried, convicted and executed.

And for that, he should pay with his own life.  Firing squad at sunrise.

And with that said, you cannot ignore what brought this all about in the first place: The “American Taliban’s” historically ignorant decision to remove a statue of Confederate Gen. Robert E. Lee from a Charlottesville public park.

And for the record, I’m referring to the “American Taliban’s” War on Statues, not their religious beliefs – including the removal of another Lee statue, among others, in New Orleans in the dead of night back in May.

This effort to whitewash American history in Charlottesville isn’t something new.  And you don’t have to be a “white supremacist” or a “white nationalist” or a “neo-Nazi” or a member of the KKK to object to it.  It’s just plain wrong.

What if local communities started voting to remove Martin Luther King’s name from streets and parks all across the country?  Can you imagine the responses to THAT?

There is a right to free speech in our Constitution.  There is NO right not to feel offended.  Grow up.  Get a grip.  And stop making mountains out of molehills.  THEY’RE STATUES for crying out loud!!!

And by the way, this whitewashing of American history didn’t start under Donald Trump.  No, these racial flames were fanned during Barack Obama’s reign.  So if you want to blame a President of the United States for Charlottesville this weekend instead of nutjob Alex Fields, blame #44, not #45.

What’s ironic today are all the calls to end the “hatred.”

Because the hatred for President Trump – especially by Charlottesville Mayor Michael Signer, who blamed Trump rather than his own inept city officials who knew this controversial rally was coming weeks in advance – apparently doesn’t count.

And that includes the stupidity grounded in Trump-hate as expressed by Congressman Ruben Kihuen (D-Nev.), who slammed the President for supposedly refusing to “condemn” what happened in Charlottesville.

I say stupidity grounded in hatred because the President specifically stated on Saturday:

“We condemn in the strongest possible terms this egregious display of hatred, bigotry and violence.”

Plain English is apparently a second language for this partisan empty-suit windbag.

Maybe we need to bring Jerry Lewis out of retirement to help raise money to find a cure.