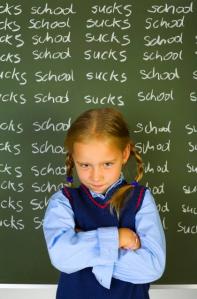 Nevada’s teachers union issued its 2011 legislative report card recently and, my, what a joke. I mean, they may as well have started off their executive summary with, “A priest, a rabbi and a minister walk into a bar…”

Let’s go right to the punch line: Every single legislative Republican scored an “F,” laying bare for all to see the undeniable fact that the Nevada State Education Association (NSEA) is nothing more than a subsidiary of the Nevada Democrat Party. The pretense of non-partisan objectivity has now been blown to smithereens.

As has any illusion that these folks debate public policy honestly.

Indeed, the NSEA actually had the stones to write that it was “proud of its record on reform,” which can only be true if it was talking about its record of using its political muscle to try to block any and all meaningful education reforms that don’t involve dumping more money into this black hole.

But the real joke of this “report card” is revealed in the last section of the executive summary, where we discover that the grades have been “weighted.”

What does that mean? Well, the NSEA explains, instead of objectively grading just the actual voting record of each legislator, 33 percent of their grade was based on “other factors.” What “other factors”? Well, totally subjective factors such as how “accessible” the legislator was to the union’s highly-paid Carson City lobbyists.

That’s right. A third of each legislator’s grade was based on the feelings of “the NSEA Lobby Team.” Which is like taking a kid who scores 75 percent or better on every test, yet flunking the kid anyway simply because the teacher doesn’t like him.

In responding to the absurdity of this report card and grading scheme, Republican Sen. Ben Kieckhefer – who says he’s going to wear his “F” as “a badge of honor” – nailed it in pointing out that the NSEA is “still talking about education from the perspective of what’s best for adults, not students.”

Indeed, if doing what’s best for the students was the objective, then every Democrat in the Senate would receive an F, since not one of them co-sponsored a joint resolution – that never even got a hearing – which would allow Nevada citizens to vote on a constitutional amendment to allow school vouchers which would allow the children of low- and middle-income parents to escape the union’s “failure factories.”

Seriously. NSEA really should stand for “No Schools Excel Anymore.” And rather than getting an “F” for its 2011 legislative efforts to assure that every child is left behind, it ought to be expelled from the public schools entirely. So let it be written; so let it be done.