Stringing Up Employers for not Hiring the Unemployed 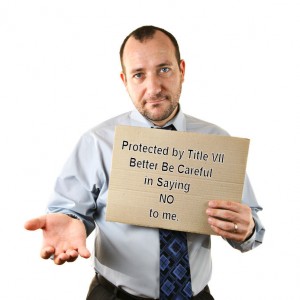 Oh, yeah, here’s a way for government to stimulate private sector job creation: Let’s make it illegal not to hire someone who is unemployed!

If you’re a business owner or manager who missed this story, you better pay attention…especially if you’re operating in the city and state with the highest percentage of unemployed in the nation. Here’s the issue in a nutshell, as explained by Sam Hananel in a recent Associated Press story:

“After two years on the unemployment rolls, Selena Forte thought she’d found a temporary job at a delivery company that matched her qualifications. But Forte, a 55-year-old from Cleveland, says a recruiter for an employment agency told her she would not be considered for the job because she had been out of work too long. She had lost her job driving a bus.

“Forte, scraping by now as a part time substitute school bus driver, is part of a growing number of unemployed or underemployed Americans who complain they are being screened out of job openings for the very reason they’re looking for work in the first place. Some companies and job agencies prefer applicants who already have jobs, or haven’t been jobless too long.”

Now, this isn’t anything new. Managers and employers have always viewed applicants who are already working more favorably than those who are not working, especially those with large gaps between jobs.

It’s certainly reasonable to ask yourself about an unemployed applicant: “What’s wrong with this person that they don’t have a job? Do they show up late and leave early? Are they unproductive? Do they not play well with others? Are they dishonest? Are they lazy?”

Of course, it’s highly possible that the individual simply hit a streak of bad luck, and that could be especially true in this ongoing Obama recession. On the other hand, we all know of someone – maybe even a family member – who is milking the unemployment system and not really looking for a job unless/until their benefits run out.

The obvious solution is for the unemployed to take a job, ANY job, and THEN maybe look around for something better. That’s just the way life works in the real world.

Barry Goldwater warned of this almost 50 years ago in opposing the Civil Rights Act; not because he supported discrimination – he didn’t – but because it “would embark the Federal government on a regulatory course of action with regard to private enterprise…and in the area of employment.” An area in which the feds have no constitutional authority.

And indeed, not only are there now federal laws banning employment discrimination due to race, but religion, gender, gays, vegetarians, drunks, drug addicts, the homeless, space aliens and illegal aliens. Heck, there was even a yahoo Nevada legislator – I can’t seem to “Tick” off his name right now – who proposed a bill last session to ban employment discrimination against someone based on their height, weight or even attractiveness.

Of course, what this is really all about is expanding the number of “victims” that race-hustlers and ambulance chasers can exploit to make a buck. Indeed, the Obama jobs bill “would give those claiming discrimination a right to sue, and violators would face fines up to $1,000 per day, plus attorney fees and costs.”

And some people still wonder why so many entrepreneurs and business owners aren’t hiring?

Here’s a final thought from Goldwater: “Ours is an economy which, when free from unwarranted government interference, has demonstrated a persistent capacity through the years to create jobs.” In other words, when it comes to unemployment, government is the problem, not the solution.

Now where have I heard that before?