Sorry, But Mining Deserves to Get the Shaft

Home Means Nevada PAC is a big-time funder of all things Democrat in Nevada and recently submitted its campaign finance report for 2020 – several weeks late; but I’m sure it was just an “oversight.”

Democrats voted for these resolutions.  Republicans opposed them.

REPEAT: Democrats voted for these resolutions.  Republicans opposed them.

Nevertheless, on October 20, 2020, Nevada Gold Mines – “the unholy alliance between transnational mining giants Barrick and Newmont,” as liberal blogger Hugh Jackson puts it – donated $250,000 to Home Means Nevada PAC, and on December 21, 2020 it kicked in another $250,000. 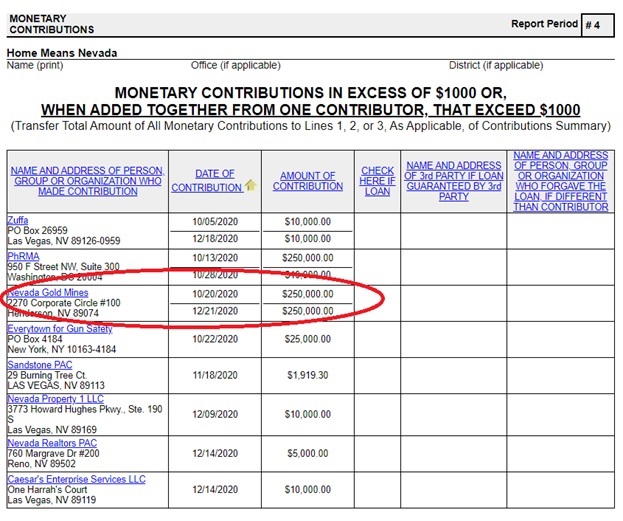 So we’re looking at a half-million dollars from Big Mining to a PAC that does the bidding of Nevada Democrats.  And how did Home Means Nevada spend its dough in the fall leading up to Election Day?

It also maxed out at $10,000 each to the Democrats’ three competitive state Senate candidates on the ballot: Kristee Watson, Wendy Jauregui-Jackins and Senate Majority Leader Nicole Cannizzaro.

I think it’s fair to suggest that the mining industry’s windfall to Nevada Democrats saved Cannizzaro’s bacon, especially since she won by only 631 votes out of more than 67,000 cast.

So Big Mining donated a cool half-million dollars to help elect the very people hell-bent on slitting its throat.  And Republicans keep defending and protecting them?  How dumb is that?

I’m not in favor of raising taxes on ANYONE – especially considering the Blue State Bailout money likely coming our way.

But mining made its bed.  Slept with their enemy.

So, if Gov. Sisolak and legislative Democrats want to tax the living tar out of them this session, I’m not gonna to lift a finger to object (except maybe the middle one).