Some Workers More Equal than Others 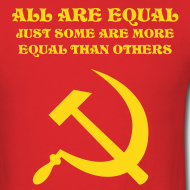 As I wrote the other day, conservatives are disgusted with the budget deal hammered out between Gov. Sandoval and tax-hiking legislators not because government grew, once again, exponentially…but that it could have and should have been shrunk so much more under present economic circumstances.

And for those who claim the government has been drastically slashed, here’s a cold dose of reality provided by Las Vegas Sun reporter David Schwartz on Friday morning:

“To hear the chorus of elected officials, both Democrats and Republicans, government has been cut to the bone as the Great Recession has dragged on. But in one respect, the new budget’s effect is slight. Out of the almost 17,000 state employees, only 37 have received layoff notices effective today, the start of the new fiscal year. State workers have once again largely escaped this recession’s cruelest effect — job loss…”

While Nevada continues to lead the nation with the highest unemployment rate in the nation, only 37 government employees out of 17,000 have been laid off? Are we supposed to believe the other 16,963 are so “essential” that their jobs couldn’t possibly have been eliminated so that Nevada’s families and small businesses wouldn’t have to suffer a $600 MILLION tax hike? And some Republicans (hello, Ira Hansen!) fell for it….again?

Beam me up, Scotty!