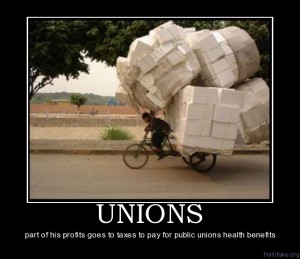 Out-of-control pay and benefit packages for public employees at the local, state and federal levels are bankrupting governments everywhere.

And the situation is even worse in jurisdictions where public employees enjoy the privilege of “collective bargaining.”

To make a long story short, once union and government negotiators hammer out a work agreement, elected government officials, who are scared to death of the unions, vote on the agreement on behalf of the taxpayers who have to foot the bill.

In essence, they sign with a gun to their political heads.

On the other hand, the employees themselves, not just their elected leaders, get to vote whether or not to accept the negotiated agreement.

As simply a matter or fairness, if the union members get to vote up-or-down on whether or not to accept the agreement, the people who will have to pay for that agreement should receive the same right.

Well, shortly after publishing our new online petition to the Governor and Legislature urging that such a change be enacted, Las Vegas Sun “journalist” Jon Ralston, in a tweet, called the idea “idiotic.”

What’s idiotic is collective bargaining agreements that allow firefighters to get paid $180,000 a year plus benefits.

What’s idiotic is the SEIU dragging its feet and refusing to negotiate a new agreement in Clark County in good faith.

And if the public knew exactly all of the ridiculous workplace rules and disincentives embedded in these agreements, they would likely do what spineless elected officials have refused to do…

Tell the unions to take their outrageous demands and shove it!

Now, if you agree with Jon Ralston that it’s “idiotic” for voters to have a say in how much public employees are paid, just delete this email and go about the rest of your day.

But if you think it’s time for citizens to have a greater say in how much government costs us, please take a minute right now to sign our online petition.