Shooting Holes in the Latest RalstonRant 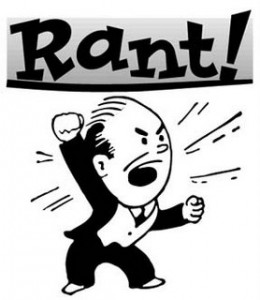 I think you all know how much it would pain me to have to publicly embarrass “journalist” Jon Ralston, but the guy leaves me no choice.

For those who may not have seen it, here’s an excerpt from Jon’s RalstonFlash Friday afternoon:

AN APPEAL TO THE APPEAL: Why is Carson City’s Nevada Appeal running a column by a political operative who uses a non-profit as a cover and who bashes politicians and candidates in the paper while supporting the candidates’ opponents and does not disclose that fact?

Is there another situation anyone can think of when an active political consultant supporting candidates is allowed to write columns pounding those he is trying to unseat, much less without disclosing his conflicts? I don’t care if he is being paid or not – it is a perversion of what a newspaper’s opinion pages should contain.

Hey, Nevada Appeal editors, did you realize all of this?

Now, if Jon Ralston had conducted himself as a real journalist, he would have checked his facts before shooting off his mouth. But as everyone knows, Jon is a bully who’s been on a jihad against me for the last several weeks and isn’t about to let facts get in the way of one of his self-righteous hissy fits.

Indeed, you all may remember Jon getting caught “trying to manufacture drama” last summer in an effort to hurt Republican congressional candidate Mark Amodei. If you missed “Political Journalist Jon Ralston Fabricates Republican Story on Twitter,” you can still read it here.

That said, here’s the thing about the Nevada Appeal column he references:

It was published by the Appeal by mistake.

Here are the documented facts:

On Thursday, December 8, 2011 at 9:41 a.m., I submitted my weekly column to the Appeal as I’ve done for the last five years with the subject line “This week’s column…” And as you’ll see in the screen shot below, it was NOT the column on Goicoechea, but instead a column responding to criticism of the Taxpayer Protection Pledge (which Jon Ralston despises almost as much as he despises me). 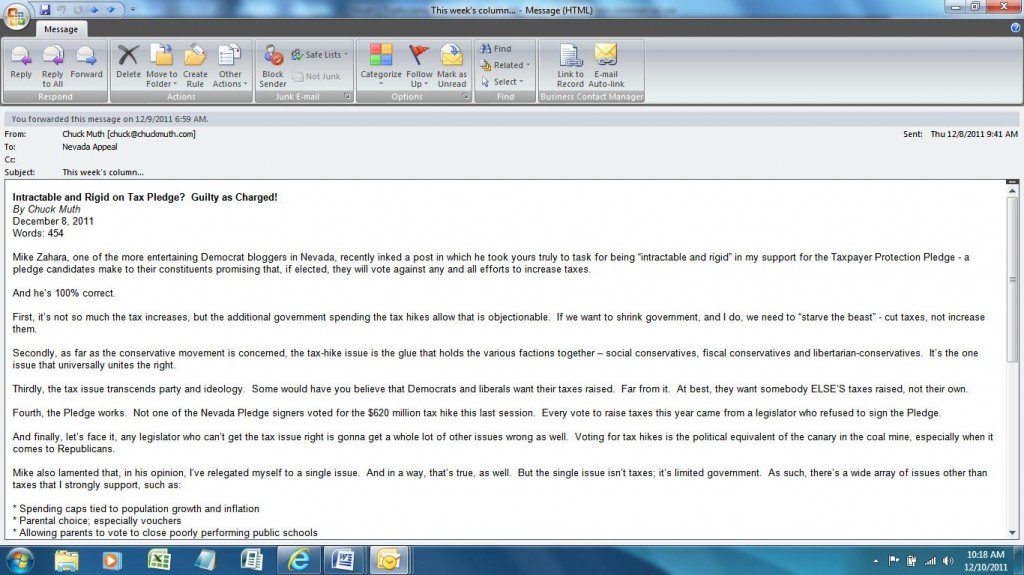 So now let’s fast-forward to Friday morning, the day after I submitted the above column to the Appeal for publication. I woke up in the morning to discover that the Appeal somehow inadvertently published my Goicoechea blog post instead of the column I actually submitted. As such, I immediately sent the editor an email advising of the mistake at 6:59 a.m., as you’ll see in the screen shot below: 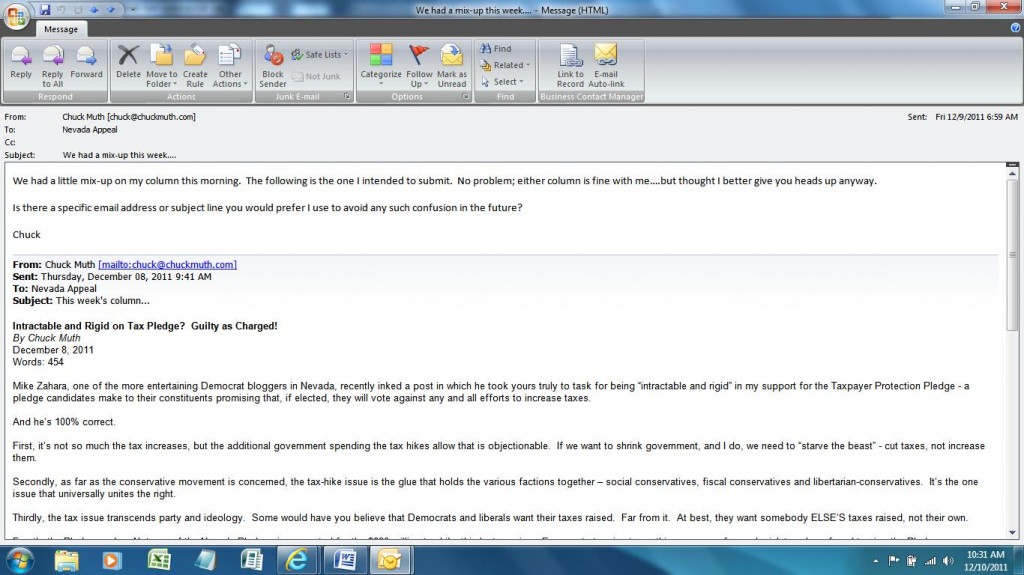 Now bear in mind that Jon’s RalstonRant – in which he sanctimoniously asks, “Hey, Nevada Appeal editors, did you realize all of this?” – was sent out at 4:37 p.m. – MORE THAN NINE HOURS AFTER THE APPEAL WAS ADVISED OF THE MISTAKE!

Had Jon bothered to pick up the phone during any of those nine hours and, you know, like a journalist, actually asked the editor about the column before blustering away, he would have known that a mistake had occurred and that I did NOT submit the Goicoechea blog post for publication in the paper.

Instead, Jon just assumed something that wasn’t true, and fabricated yet another story in an effort to manufacture drama and take another shot at a conservative he’s sore at because I dare to stand up to his liberal bullsh*t.

Finally, let’s address Jon’s high-and-mighty assertion that someone “supporting candidates” who writes “columns pounding those he is trying to unseat…is a perversion of what a newspaper’s opinion pages should contain.”

Jon may be a trained journalist, and often even practices real journalism. But the reality is he’s a liberal political activist who has made a career out of pounding candidates he doesn’t favor (usually conservatives) on the opinion pages of the newspapers where he works.

For just one prominent and recent example, consider the regular skewering Jon did to conservative Sharron Angle in the last election cycle. Here’s just one paragraph from just one column which appeared on the opinion page of the Las Vegas Sun last October 18:

“Of those small contributors, my guess is only a handful of the 161,358 people know much about Angle. They have no idea about her religious fervor, fail to separate her church (which apparently doesn’t like Mormons) from our state, or her multifarious positions on Social Security and Medicare, her sympathy for ‘Second Amendment remedies’ or her latest incendiary comments about Dearborn, Mich., and nonexistent Frankford, Texas, implying ‘the Muslims are coming, the Muslims are coming.’”

So, please, Jon…come down off your high-horse and spare us your sanctimonious pontification. You manufactured drama on Friday by launching another RalstonRant diatribe without checking your facts.

Either that or you just outright lied.

If this is your idea of professional “journalism,” it’s no wonder you can’t land that gig in Washington at MSNBC you so desperately covet.