Sharron Angle Against the World 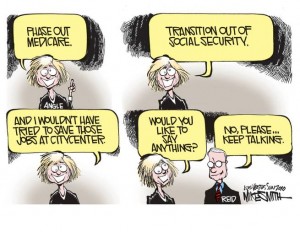 If you ever wondered why Sharron Angle has almost NEVER won a Republican primary race with more than half of the GOP votes – including her “win” in the U.S. Senate primary last year – the email solicitation she sent out Sunday morning will tell you all you need to know.

This woman has an uncanny knack for insulting, offending and driving away otherwise would-be supporters that is unrivaled. She is, without a doubt, the biggest divider, not uniter, among Republicans in Nevada. In fact, under the word “polarizing” in the dictionary, there’s a picture of Sharron Angle (ba-da-boom!).

She’s the political equivalent of Russell Crowe: She just wants to fight EVERYBODY, including her own philosophical allies.

She’s like a blind bank robber; you know somebody’s gonna get shot, you just don’t know who.

In her fundraising email, Angle first goes after Ross Miller, the Democrat Nevada Secretary of State; “the same one who said that Harry Reid could bribe voters with food and gift cards.”

First, Miller never said any such thing. Secondly, even if he did, that’s not why Reid won. Reid won because Angle and her campaigned sucked eggs…though I’m not sure you need to use the word “eggs.”

Angle then says Miller wants “to make sure Republicans are forced into a bitter multi-candidate special election to make it easier for a Democrat to win.”

But then again, the only real reason Democrats might be able to win a multi-candidate special election is because Sharron Angle would be one of the GOP candidates. It’s Angle’s presence that creates the potential for a bitter multi-candidate race for Republicans. A divider, not a uniter.

Angle then redirects her fire at…her own Republican Party.

“The Nevada Republican Party,” she writes, “wants its attorneys to make sure that a small handful of their lackeys can choose who the Republican nominee will be, not the voters.”

That “small handful of lackeys” are the GOP’s central committee – a large majority of whom supported her whole-heartedly in her losing effort against Reid last year. Those folks aren’t “lackeys.” They are elected members of the party’s governing board which dumped a ton of dough into Angle’s campaign last year.

Not to mention the army of grassroots soldiers who pitched in to help her. And for what? This back-hand across the face?

By the way, these would be the same “handful of lackeys” who welcomed her with open arms and boisterous applause when Angle spoke to them at their meeting in Fallon after she blew the Harry Reid race. These people are NOT her enemies.

At least….they weren’t until her email went out Sunday morning. Angle may well have succeeded in once again making opponents out of allies. Effortlessly, if not mindlessly.

She then goes on to accuse the Democrats and the Republicans of uniting for one purpose and one purpose only…to stop her. Yes, it’s Sharron Angle vs. The World!

“I’m amassing a financial war chest because as soon as the’re (sp) done spending their money on their expensive attorneys, they are going to combine their efforts against us,” Angle warns with all due paranoia. “They don’t want you to have a real grassroots Republican representing you in Congress – they want their hand-picked establishment drone.”

If Nevada Republicans don’t pick Angle, they’ll be choosing one of the other three announced candidates:

Angle then makes her pitch for dough:

“Without your support, we will either get a liberal Democrat or a Republican who might as well be one. . . . We can win and be the true conservative if we work together!”

This is the same slash-and-burn tactic Angle used to smear her fellow Republican opponents in last year’s U.S. Senate race. In her mind, she is the one true conservative. The only one. Every other Republican in Nevada is a “liberal” by comparison.

Indeed, to separate the candidates you have to dig deeper into each issue. For example, Angle believes that a teenager who is raped and impregnated by her father should be prohibited from getting an abortion. I’m not sure the other pro-life candidates would agree.

Angle concludes with this:

“It’s amazing what lengths politicians will go to maintain power. Whether it was Harry Reid’s deceit, the media’s half-truths and lies supported by tens of millions in dirty money, or power-grabbing from our own Republican establishment here in Nevada, they will stop at nothing to silence our voice.”

What’s amazing are the lengths Sharron Angle will go to to get elected to something…anything. She has been on the ballot for one seat or another for the last twenty years. She is, by ANY definition, a career, professional politician. (Just not a very good one judging by her win-loss record).

And all the Nevada Republican Party is trying to do in this CD-2 race is keep Angle from losing the seat to the Democrats – as only she can do. That’s not a “power-grab;” that exercising a fiduciary responsibility. This isn’t about silencing Sharron Angle’s voice; it’s about, as Charlie Sheen would say, winning.

The bottom line is that this “Saint-Sharron-as-Joan-of-Arc” act is getting old; and this tarring of every fellow Republican as a liberal, and the disparate membership of the Central Committee as “the establishment,” is just a flat-out lie.

I recognize that Angle still has a dedicated cadre of Kool-Aid drinkers in her corner, but sooner or later even they are going to have to come to the conclusion that this divisive perennial candidate is not the Nevada Republican Party’s savior, but a false prophet; not the glue to bind the party together in electoral victory, but poison in the GOP’s well.