Sen. Halseth: Why Her Marital Woes are Fair Game 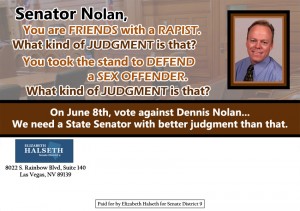 Sometimes you’re simply damned if you do and damned if you don’t. Such is the case with the decision whether to write about the marital woes of conservative state Sen. Elizabeth Halseth.

To refresh everyone’s memory: Halseth had her husband arrested on November 21 on an “open and gross lewdness” charge having to do with an incident that took place in their home a week earlier.

In the arrest report (which includes a few “f”-bombs), Daniel alleges that Elizabeth “was having an affair” and that’s what was at the heart of the incident…a fact originally reported by the Las Vegas Sun and then mysteriously deleted from its website.

Daniel, not surprisingly, has now filed for divorce. The couple have three young children; all, I believe, under 10 years of age.

Now, I have considerable more information on this matter, some of which has also already been posted in comments on various newspaper stories. The question is: Do I report it? Is it relevant to Sen. Halseth’s elected position and official duties….or is this purely a personal matter?

Believe me, I’ve wrestled with those questions for almost two weeks now, and have come under some rather significant pressure to leave it alone. There are a lot of people who don’t want me to tell the story.

But I’m going to anyway…and I’ll tell you why.

Back in the GOP primary race between then-incumbent state Sen. Dennis Nolan and Elizabeth Halseth, Halseth came into possession of a recorded phone message that Nolan had left for the sister of a rape victim, urging her to change her story. And Halseth made the tape public via her campaign website and used it in a campaign radio ad.

Now, it would appear this matter was also of a personal nature completely unrelated to Sen. Nolan’s official duties as an elected official. Which is exactly the point made by “Face to Face” host Jon Ralston when he had both Nolan and Halseth on his program. Ralston specifically asked Halseth why this issue was relevant in the campaign.

“Listen, it was bad judgment to do what he did,” Halseth eventually replied.

Indeed, “judgment” was the crux of a brutal mailer Halseth did against Nolan in the primary.

Therefore, exercising bad judgment is Halseth’s own criteria for whether or not a personal issue is relevant and deserving of public commentary and scrutiny for a political figure. Those were her exact words, not mine. Keep that in mind.

Later in the interview, Ralston again asked about the relevance of the issue. “What is the point here?” he inquired.

“Listen,” Halseth replied, “as a sexual assault victim myself…”

Uh-oh. That point itself has relevance in the arrest story…as you’ll see later in this report.

But let’s stick with whether or not Halseth’s personal behavior and marital woes are fair game on the political battlefield. Again, it was Sen. Halseth herself who set the criteria for what can and cannot be used in a political campaign.

Indeed, Halseth’s entire 2010 general election campaign against Democrat Benny Yerushalmi was based on family and “values.” Her campaign signs, posters and mailers featured a wholesome photograph of Elizabeth with husband Daniel and their three adorable children.

On the other hand, in one notorious campaign mailer, Halseth featured a photo of Yerushalmi with his wife (who, and I’m not afraid to write this, looks smoking hot!) in a low-cut evening gown next to the tagline: “Not Our Values.”

And if you don’t think the Democrats are going to use this in future campaigns….maybe even during the upcoming campaigns even though Sen. Halseth won’t be on the ballot….you’re nuts.

And now that she’s been accused by her husband of having an extramarital affair in an official, public document, THAT raises the hypocrisy question. If the accusation is true (and I have reason to believe it is), is that “our values”? Is that good “judgment”?

Now to be fair, unlike former Sen. John Ensign, Sen. Halseth has not admitted to what her husband has accused her of. Nevertheless, there are some very troubling aspects to the incident in which Daniel was arrested, as well as some potentially devastating political ramifications for Republicans. All of which I’ll get to in Part Two of this report tomorrow or the next day.