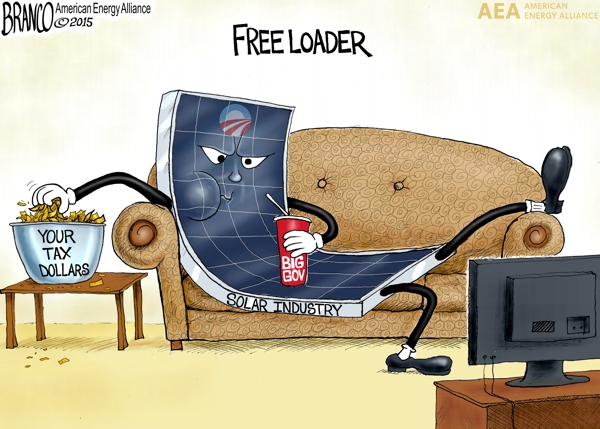 Everybody LOVES the idea of clean, free energy from the sun.  Problem is, like everything else on this planet, there’s no free lunch.  Somebody has to pay.  Which is apparently a totally alien concept to Nevada Gov. Brian Sandoval.

Essentially what net metering means is that when a rooftop solar homeowner generates more electricity than they need during the day, NV Energy is required, by law, to give that homeowner a credit towards their bill for the electricity they use from the grid when the sun don’t shine – particularly at night.

But not only does the net metering law require NV Energy to buy the excess electricity from the homeowner – another unfunded government mandate – but they have to pay a higher retail rate than it would cost the company to produce their own energy or buy on the open market from a cheaper generating source.

“The retail electricity rate includes the cost of transmission, delivery or grid maintenance. Under net metering, solar customers get paid about twice as much for their power than power plants, which are compensated at the wholesale rate, even though their excess generation often isn’t needed and can make it harder to manage the grid. As more people adopt solar, other electric customers will have to shoulder higher costs for operating the grid.”

You brew a pot of coffee in the morning.  But you only drink two of the ten cups you brewed.  If we had “coffee metering,” the government would tell Starbucks that not only was it REQUIRED to buy your excess coffee, they had to give you a gift card for the full retail value of your extra eight cups rather paying a wholesale price.

And what that means is the rest of us who can’t afford a rooftop solar system have to pay a higher rate for our electricity than we would have if the power company wasn’t forced to buy the more expensive electricity from solar homeowners.

Again, in 2015 the Nevada PUC put an end to this price-hiking welfare scheme – which solar panel companies used to “hard sell” homeowners into buying extremely expensive rooftop solar systems despite their own government subsidies.

But in the 2017 Nevada Legislature, along came the Solar Subsidy Gang, led by the Green Queen of Solar Welfare, Assemblyman Chris Brooks (D-Solar City), to resurrect net metering from its grave.

Brooks is a short, little freshman legislator with a similarly short temper.  Colleagues tell me he has a bit of “Napoleon Complex” and doesn’t take criticism very well AT ALL.  He’s also been in the solar power industry for almost two decades.

Nah, no conflict of interest there, is it?

While Brooks’ self-serving motivation is clear, the fact remains that Sandoval supported PUC’s 2015 decision that solar customers should be paid a wholesale rate for their excess power that the power company didn’t want or need, rather than a retail rate.  But like so many other Sandoval positions etched in sand, he flip-flopped and reversed himself on net metering by signing the Green Queen’s bill.

Here’s the thing: Solar power is a great idea with great potential – when the technology is developed far enough to make it affordable without taxpayer and ratepayer subsidies.  In the meantime, Sandoval and the solar industry welfare queens are serving up a “free lunch” – at our expense!

The end of the Sandoval Error can’t come soon enough.

IN OTHER NEVADA NEWS & VIEWS…

I wonder how the amnesty gang at the militant Culinary Union feels about this?

I don’t know if it will last, but after walking into that press conference with Nevada RINO Gov. Brian “Medicaid Expansion” Sandoval a couple weeks ago and publicly jabbing a stick into the eyes of conservatives/Republicans/President Trump over Senate efforts to repeal and replace ObamaCare, Sen. Dean Heller has kept a far lower profile as he continues to weigh the ever-evolving legislation.

Good.  It’s one thing to have concerns and negotiate for better terms – heck, that’s what our president is known for!

But to play into the fake news media’s hands and give aid-and-comfort to people who will never vote for him under any circumstances – including his two potential Democrat opponents in 2018, liberal warhorse Rep. Dina Titus and wet-behind-the-ears Rep. Jacky Rosen – by voicing his criticisms publicly was not helpful.

Bravo to Sen. Heller for playing his cards closer to his chest these days under very difficult circumstances.  Let’s hope, in the end, he remembers that he campaigned on repealing ObamaCare and ultimately votes to do just that no matter how imperfect the bill from RINO Sandoval’s perspective it is.

Speaking of which, David Cantanese of U.S. News & World Report gives the early edge to Democrat challenger Rosen in Nevada’s U.S. Senate race against Heller, arguing that if Heller votes for repealing ObamaCare it’ll tick off 120,000 Nevada residents who will lose their Medicaid welfare handouts.

On the other hand, if he votes against repealing ObamaCare, Heller stands to lose maybe 10-25% or more of his GOP base in the general election who will vote for a third-party candidate, “None of the Above,” or just not vote in his race at all.

Dance with the ones that brung ya, Senator!