Sam Brown: Can He Catch Lightning in a Bottle in Nevada U.S. Senate Race? 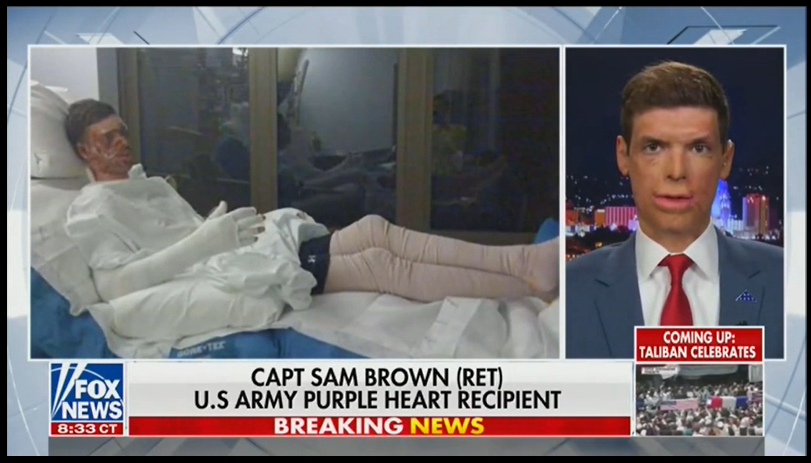 (Chuck Muth) – One of the universal truths in politics is that you can’t beat somebody with nobody.

And one of the arguments being trotted out by Mitch McConnell and the DC “establishment” is that there’s no viable, credible alternative to Adam Laxalt as the GOP’s standard-bearer in next year’s crucial U.S. Senate race in Nevada.

I was introduced to Captain Sam Brown – who’s also running for the seat in the GOP primary – a few weeks ago at an event at the Ahern Hotel.  It didn’t go much beyond shaking hands and exchanging pleasantries.  But we’re scheduled to meet later today for a more in-depth talk.

And it should prove very interesting, especially after I watched his interview on FOX News’ Sean Hannity show last night.

Sam may be soft-spoken, but his message – especially as it related to Biden’s Afghanistan fiasco – was POWERFUL.  In fact, as Hannity handed off the broadcast to fellow host Laura Ingraham, here’s what Laura had to say…

“Hannity, your guest, Captain Sam Brown – first of all, I want to sign up for his campaign for (U.S. Senate) in Nevada.  He – he was so good; I mean, we have all these politicians on our shows – he’s the anti-politician. … He was a GREAT guest. … Thank you for introducing him to America.”

Unlike Biden – who all but screamed at us during yesterday’s bug-out speech – Sam doesn’t have to be loud to be heard.  His story of sacrifice – gravely wounded in an IED explosion in Kandahar – and patriotism speaks for itself.

And it’s striking a chord with Nevada GOP voters…as well as voters all across the country.

I don’t know if Sam can put together an insurgent campaign to defeat Laxalt and the DC establishment in next year’s primary or not.  But the potential is definitely there.

Nevada Republicans are tired of losing with the same tired, uninspiring, DC-backed candidates with their stock talking points and hollow promises.

They’re looking for “new blood” to rally behind – not just to beat the Democrats, but to beat the GOP establishment that keeps foisting the likes of Mitt Romney, Dean Heller and Brian Sandoval on us.

And if Capt. Brown’s campaign catches fire, we could witness a MAJOR upset next June in this primary race.  Keep an eye on it.  I know I will.

“Republican Adam Laxalt has launched his campaign for Senate… The former state attorney general is the consensus choice of the Republican establishment in Nevada and Washington, D.C.” – Washington Examiner