UNLV’s new logo design is just plain wrong on two fronts – one political, the other business.

First, take a look at these before and after images… 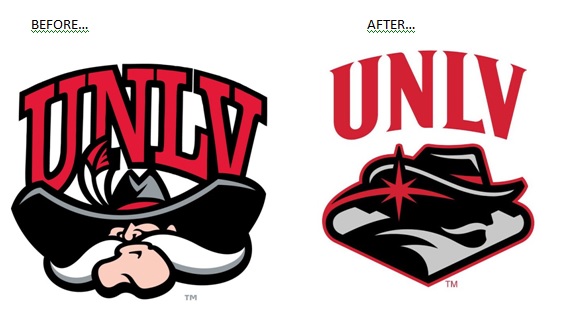 Reactions to the new logo have not exactly been positive.

“What is it?????” tweeted Michele Correa. “It kind of looks like a folded pile of clothes with a cowboy hat.”

And that was one of the more kind reviews!

So what was wrong with the original image?  Absolutely nothing – unless you’re politically correct.

So the Sensitivity Police declared “Hey Reb!” had to go.  And UNLV caved to the pressure.

The claim that the new logo was for the purpose of conveying something more “modern and strong” is pure PC BS.

But as outrageous as the design and true reason for dumping “Hey Reb!” is, the who and how it was developed is equally infuriating.

“UNLV outsourced the project to Adrenalin, a design firm based in Denver,” the Las Vegas Review-Journal reports.  “The university paid close to $50,000 raised through private donations for the design.”

And they’ve been working on this project since last September – nine MONTHS ago.

First, do you mean to tell me that in a city known around the world for its marketing prowess that there wasn’t a single local graphic design firm in Las Vegas that could create a simple logo for the University of Nevada Las Vegas?

It’s hard to imagine a small business owner or entrepreneur in the private sector spending his own money for a logo – as opposed to a publicly-funded operation spending someone else’s money, even if fungibly funded through “private donations” – would waste that much moolah on such a project.

No way.  Instead, the smart, frugal business owner would have used one of many new online, high-tech graphic design services, such as 99 Designs.

Indeed, 99 Designs would launch a logo design contest where the winner would be awarded a prize of…just $1,299!

For that amount up to 60 designs would be submitted from some of the top, hand-picked designers in the WORLD.  And based on initial criteria established by UNVL, the designers would then get to work on the project “round the clock.”

Designs would be submitted every day and UNLV would be able to review them and make suggestions as to which ones “hit the mark” through real-time online feedback “to help designers shape their ideas to fit your needs.”

“After 7 days,” 99 Designs explains, “choose the winner of your design contest. Your designer gets the prize money and you get full design copyright.”

By using 99 Designs instead of Adrenalin, UNLV would have saved $48,701 and had the project completed in one week instead of nine months!

And would have gotten a MUCH better logo that didn’t look like a “pile of clothes with a cowboy hat.”

Or it could have saved the entire $50,000 by simply leaving the current logo alone. There was nothing wrong with it.  Unless you’re politically correct.