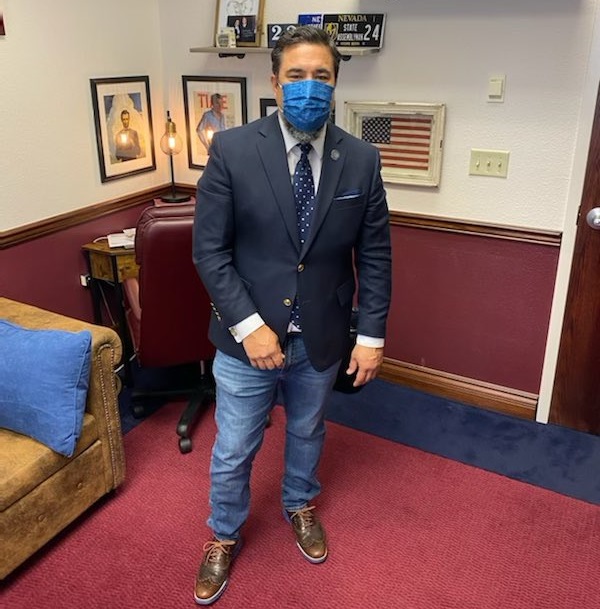 (Chuck Muth) – The last day for candidates to file for office in Nevada for this election cycle is Friday afternoon – which is also the official opening day for RINO hunting season!

RINO, of course, stands for “Republican In Name Only.”  It refers to candidates who run as Republicans, but after getting elected, vote like Democrats.

And I’m salivating like one of Pavlov’s dogs at the coming opportunity to cull from the GOP herd one of the worst RINOs in the state: Glen Leavitt.

Leavitt is a sitting assemblyman (Boulder City & Henderson).  And his voting record over two terms in office stinks on ice despite representing one of the most GOP-friendly districts in Clark County.

He’s now filed to run for the state senate to replace another tax-hiking RINO, Sen. Keith Pickard, who wisely decided to quit rather face the music this year for reelection.

Lemme get this out of the way first: The candidate I’m supporting in this race is an experienced, true conservative who worked in the Trump administration.  His name is Jeff Stone.  And if you’re not familiar with his impressive bona fides, I wrote about him a few weeks ago.  Click here.

Now back to the RINO hunt…

Leavitt was essentially “gifted” his assembly seat by his tax-hiking sister-in-law after she was termed out in 2018.

He was, however, challenged in the GOP primary by Matt McCarthy, a decorated retired police captain who was once shot in the line of duty by a drug dealer. But Leavitt went after him with a vengeance because he was also…

“Now he (McCarthy) and his husband are trying to buy our Republican seat…” read one of the homo-hating hit pieces I still have a copy of.

Subtle he wasn’t.  But he went on to win the seat.

And at his first Republican Assembly Caucus meeting after the election, the newly-minted freshman strutted into the room and scolded his new colleagues.

He told them it was time to stop trying to repeal the Commerce Tax – part of the largest tax hike in Nevada history that his predecessor, who endorsed him as her hand-picked replacement, voted for in 2015.

Naturally, Leavitt has refused to sign the Taxpayer Protection Pledge promising to “oppose and vote against any and all efforts to increase taxes.”  (Mr. Stone has already signed it.)

This helps explain why he was the only Republican legislative candidate in 2020 who was endorsed by the liberal Las Vegas Sun-Pravda, as well as by fellow RINO’s such as Sen. “Tax Hike Mike” Roberson, Sen. Joe Hardy, and Assemblymen Paul Anderson, John Hambrick and Chris Edwards – all of whom voted for the 2015 tax hike.

Yeah, I’m loaded for bear with this guy!

Now, normally I’d prefer to focus on Leavitt’s lousy voting record and anti-conservative positions on issues rather than bringing up just how seriously messed up this guy’s personal life is.  But since Leavitt “went there” with Capt. McCarthy, all bets are off.

What’s good for the goose…

Now, let me acknowledge that some of this stuff is unconfirmed gossip I’ve heard through the grapevine from folks I trust who served with him in Carson City.  But as they say, where there’s smoke…

I mean, when your life is THIS messed up, how in the world can anyone think he can effectively represent his constituents?

But hang on.  Believe it or not…it gets worse.

And after apparently using up all the money he had left over from 2020, now has less than $6,000 in the bank for his Senate race.

And there are some VERY questionable expenses listed on his report – including “Office Expenses” from Wal-Mart, Best Buy, Amazon, Target and…the Ross Dress for Less women’s apparel store?

By comparison, Assembly Tom Roberts – also from Las Vegas, also a RINO, and the Assistant Minority Leader – only reported spending a total of $336.96 with Southwest Air during the same period of time.

Something here just doesn’t add up and I can’t wait to dig into it deeper.

And if you think all this means maybe our trans-Republican ain’t exactly fiscally responsible, well, you’re right.  Get this…

In 2012, while he still had his government job with the Regional Transportation Commission (RTC), Leavitt filed for Chapter 7 bankruptcy after living beyond his means and racking up almost $500,000 dollars in debt.

That included around $150,000 in student loans for the lawyer wannabe who “struggled with the school’s burdensome academic requirements and was subsequently dismissed from the law school after his first year.”

Amazingly – and this sounds like it came directly from AOC herself – Leavitt claimed in court that because he flunked out of law school and would have to get a real job, he was “unfairly burdened by law school debt” and that being forced to repay the loans he voluntarily took out would be an “undue hardship” on him.

Oh, please.  He knew what he was getting into and just couldn’t hack it.

And despite being required to seek “credit counseling” as part of the bankruptcy, it appears, from reading his campaign finance report that he’s learned nothing.  Still wildly spending more than he has – but this time it’s with his donors’ money.

Seriously, this guy’s got more baggage than a Samsonite factory!

Lord, I hope he doesn’t withdraw from the race.  Please don’t take this away from me.  I’m literally licking my chops at the prospect of roasting this guy like a pig on a spit.

Welcome to RINO Hunt ’22!  We now return you to our regularly scheduled program…

* Former Democrat Clark County Commissioner Tom Collins filed this week to challenge Democrat Gov. Steve Sisolak in the Democrat primary in June.  These two seriously don’t like each other.  Grab some popcorn!

* Our good friend Bill Newyear will be hosting a forum for Nye County commission candidates on Tuesday, March 22 at 7:00 pm at the Pahrump Senior Center located at 1370 W. Basin Road.

“I worked with Steve (Sisolak).  I saw him in action. His top priorities were always himself, his wallet, and his donors.” – Democrat gubernatorial candidate Tom Collins