As regular Muth’s Truths readers know, a very special teacher named Brenda Moynihan at C.T. Sewell Elementary School in Henderson, Nevada, entered a contest sponsored by Farmers Insurance to win a $100,000 grant to build a technology learning center for her school and students.

Sewell’s student body is mostly low-to-middle income kids “who rarely have access to computers or tablets at home.”

Ms. Moynihan’s and her grant proposal made it to the Final Three in the southwest region, going head-to-head with schools from Arizona and California – states with FAR BIGGER populations than Nevada.

Voting for the grand prize winner began back in October and many of you joined me in voting for Ms. Moynihan and C.T. Sewell over the past several weeks.

“Principal Ratliff: The Dream Big Teacher Challenge winners were announced today and although Ms. Moynihan was not a grand prize winner, we appreciate her dedication and participation in the two month challenge. We would like to recognize her with a $2,500 contribution to be used toward her classroom to benefit her students. When would be a good time to visit CT Sewell and give her a personal thanks for her efforts in this challenge? We would also like to record a short message from Ms. Moynihan thanking all of her voters that can be used on the Farmers website. Sewell did a great job representing the state of Nevada. We hope Sewell continues to participate in the grant opportunities available at www.thankamillionteachers.com. Let me know if tomorrow would work or if there is a better time next week.”

“Staff: Although we did not win, I am so extremely grateful to all of you for your support of our school and students!! Congratulations, Ms. Moynihan for being a national finalist and for earning money for your students!!! Such a great way to shine and share positive news about our school nationwide!!! I have confirmed with Mr. Compan to join us and our other special visitors for Sunrise Ceremony tomorrow morning…. One busy, fun-filled morning. :) Keep shining, everyone!!!!”

Ms. Ratliff was kind enough to invite me to the ceremony to thank all of you for your support and votes. So even though I was in San Diego at a conference, I cut my trip short and drove back last night to be there.

What was really cool is that all of the major television stations were there this morning, as well, to cover the presentation of the $2,500 consolation check from Farmers and thank Ms. Moynihan for her efforts.

All the kids and teachers and some representatives of the school district were there in the playground area, as well, lined up in front of a small podium and where Mr. Compan spoke and invited Ms. Moynihan up so everyone could thank her and give her the $2,500 check.

It was all a ruse.

And with your votes…

Ms. Moynihan had NO IDEA.

Everyone who knew she’d actually won the grand prize, including yours truly, played it to the max right up to the check presentation.

To say she was stunned would be a gargantuan understatement.

And indeed, plenty of tears of joy were shed as the students and staff realized what had happened and erupted in the kind of sustained applause usually reserved for rock stars.

But is my book, Brenda Moynihan IS a rock star.

And wrote a grant to help her students that she never in her wildest dreams thought would actually win.

Brenda Moynihan is the kind of person Willy Wonka was referring to when he said, “We are the music makers. And we are the dreamers of dreams.”

Or as Walt Disney said, “If you can dream it, you can do it.”

And as Dorothy sang in the Wizard of Oz, “The dreams that you dare to dream really do come true.”

And thank each and every one of you who cast votes in this contest to help make this dream come true!

Here’s a photo of (l-r) me, Bobby Ellis (who brought this project to my attention), Brenda Moynihan, Principal Holli Ratliff, Jerry Carnahan and, of course, the check for $100,000! 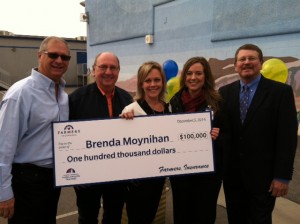